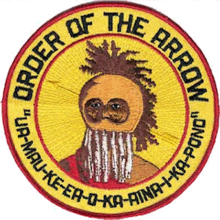 Scouting in Hawaii has a long history, from the 1900s to the present day, serving thousands of youth in programs that suit the unique environment in which they live.

The first troop in the islands, appropriately numbered Troop 1, was founded by a British Scouter just recently relocated, and chartered to Kawaiahaʻo Church. One Saturday, former Queen Liliʻuokalani was driven past Kapiʻolani Park in Honolulu, and noticed this troop going through Scouting drills. She stopped and enquired what manner of military play this was, and the Scouts eagerly explained the concept of Scouting to her. On a following Saturday a month later, the Queen reappeared, and presented to the troop a Hawaiian flag. Emblazoned upon the red-white-and-blue stripes were the Hawaiian royal crest and the lettering in gold The Queen's Own Troop, which she had labored at herself. As the Scoutmaster was an Englishman, in their tradition of naming rather than numbering troops, the appellation stuck.[1] The unit claiming longest continuous charter is Troop 1.

David McHattie Forbes was the founder of Scouting in Waimea in the early 1900s.[2]

In the 1970s, the third Hawaiian council, Kilauea Council on the Big Island, merged into Aloha Council.

There are two Boy Scouts of America local councils in Hawaii.

Maui County Council was founded in 1917, and is one of the very few councils that have not undergone a name change or merger in their entire history. With headquarters in Wailuku, Maui, the council serves the islands of Moloka'i, Lana'i and Maui, and may eventually serve Kahoolawe, as it reverts back to civilian control from being the Navy test range.

The Aloha Council of the Boy Scouts of America is headquartered in Honolulu, and supports Scouting units around the Pacific Basin. The Aloha Council encompasses not only Hawaii, but also Guam, American Samoa, the Northern Marianas, the Marshall Islands, Micronesia and Palau. In all, the Aloha Council covers the largest geographical area in the world, over 8,000,000 square miles (21,000,000 km2), spanning 3,000 miles (4,800 km) on both sides of the equator and international dateline.

The Nā Mokupuni O Lawelawe Lodge 567, chartered in 1973, serves 296 Arrowmen as of 2004. The lodge totem is a pu'eo (Hawaiian owl), the lodge symbol is a Hawaiian outrigger canoe, and the name translates to "Islands of Service" in the Hawaiian language. In 1973, Kamehameha Lodge 454 (chartered in 1951 to the Kilauea Council in Hilo) and Achsin Lodge 565 (chartered in 1970 to the Chamorro Council on Guam) merged with Pupukea Lodge 557 (chartered in 1962, the original Aloha Council lodge) to form the larger lodge.

The requirements for Hawaiiana include the composition of a 750 word essay on the pre-European history of the Hawaiian people; the collection of at least five representative leaves or flowers of native fauna from four specific zones of the island; the development of a sketchbook detailing five native birds; the recitation of the Scout Oath, Law, Motto and Slogan in Hawaiian and offer its English translation; the recitation of twenty five Hawaiian place names and their meanings; the recitation of 25 common Hawaiian terms and their meanings; participation in a series of Hawaiian games; participation in six methods of Hawaiian cooking; preparation of traditional foods without cooking; the demonstration of a Hawaiian method of fishing; the construction and demonstration of a number of Hawaiian implements; the oral recitation of names and facts surrounding five famous Hawaiians from the years before 1779; the demonstration of two forms of hula and accompanying chants; the conduct of a Hawaiian play; visitation to at least two historical sites and the completion of a report detailing the visit.

These broad and comprehensive requirements are detailed in the 168 page guidebook published by the Aloha Council and available at the Council offices. The Hawaiiana award itself is in the form of a base metal medal with polished highlights suspended from a red and gold ribbon, featuring a poi pounding stone with a flaming torch in front. There is also a corresponding 3" embroidered patch that may be worn on the right pocket of the Scout shirt.

Girl Scouting started in Hawaii in 1917 with two troops in Oahu. Troop 1 at the Kamehameha School for Girls completed their paperwork first, but Troop 2 in Kaka‘ako asked for the sponsorship of Lili'uokalani, the last monarch of Hawaii, and were promised her own flag that was given after her death. The Oahu council was established in 1918 and chartered in 1919. Other islands followed until Kauai had its first troop in 1936. In 1963 the Girl Scout Council of Oahu expanded to include all of Hawaii as well as Wake and Midway and was renamed Girl Scout Council of the Pacific. Wake and Midway were later dropped and in 1990 the council was renamed Girl Scout Council of Hawaii.[1]

The Girl Scouts of Hawai'i has about 5,500 girl and adult members.

The Aloha Council has designated a full-time senior Scout District Executive for American Samoa, John A. Mills, in efforts to elevate the local Scouting program. In addition, there are USA Girl Scouts Overseas in Pago Pago, serviced by way of USAGSO headquarters in New York.

Scouting in the Federated States of Micronesia

Main article: Scouting in the Federated States of Micronesia

The Federated States of Micronesia are presently developing Boy Scouting as part of the Aloha Council Pacific Basin District. The person responsible for Scouting is Mr. Berson Joseph, Youth Coordinator of the State of Pohnpei Social Affairs Office. In addition, there are Girl Scouts of the USA Overseas on Chuuk, Kosrae, Pohnpei, and Yap, serviced by way of USAGSO headquarters in New York.

Guam has had Boy Scouting for decades, as part of the Aloha Council Chamorro District. Prior to the early 1970s, a separate Chamorro Council serviced the island. In addition, there are Girl Scouts of the USA Overseas on Guam, serviced by Guam Girl Scout Council in Hagåtña.

Scouting in the Marshall Islands

The Marshall Islands are presently developing Boy Scouting as part of the Aloha Council Pacific Basin District. In addition, there are Girl Scouts of the USA Overseas in Ebeye, Kwajalein, and Majuro, serviced by way of USAGSO headquarters in New York.

Scouting in the Northern Mariana Islands

The Northern Mariana Islands have had Boy Scouting for decades, as part of the Aloha Council Pacific Basin District. In addition, there are USA Girl Scouts Overseas in Rota, Tinian, and Gregorio T. Camacho Elementary School on Saipan, serviced by way of USAGSO headquarters in New York.

Palau is presently developing Boy Scouting as part of the Aloha Council Pacific Basin District. In addition, there are USA Girl Scouts Overseas in Koror, serviced by way of USAGSO headquarters in New York.

Scouting in other Pacific islands