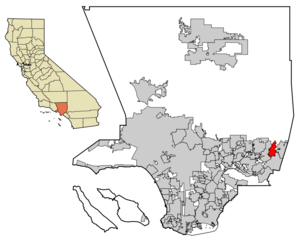 The history of this area dates back to the 1830s when Don Palomares received a convert|15000|acre|km2|0|sing=on land grant from Governor in 1837, which included the land of present day cities Pomona, Claremont, San Dimas, Glendora, and La Verne. This holding was called Rancho San Jose. The adobe which Palomares built in 1837 is still preserved in Pomona as 'La Casa Primera' (The First House). Palomares soon moved a mile or so northeast and constructed the Palomares Adobe. He ensured that a nephew, Jose Dolores Palomares, secured a tract of land a mile west. In the mid-1880s, entrepreneur Isaac W. Lord purchased a tract of Jose Palomares' land and convinced the Santa Fe Railroad company to run its line across towards . Lord had the land surveyed for building lots and in 1887 had a large land sale, naming the new town 'Lordsburg' after himself. He also had a large Lordsburg Hotel constructed, but the land boom was over by the time it was completed. It sat empty for several years, until sold to four members of the German Baptist Brethren Church, who persuaded others of that denomination that it would be an excellent site for a new institution of higher learning. Lordsburg College was founded in 1891. In 1906 the town was incorporated. Residents grew field crops, then began planting citrus trees, which flourished. Lordsburg became known as the "Heart of the Orange Empire." In 1917, after I.W. Lord died, citizens changed the name of "Lordsburg," taking the name of a small unincorporated village which had once been settled to the west. L.H. Bixby and her sister, members of a ranching family, named the foothill area "La Verne" [Citation | year = 2007 | title = "The History of La Verne" | url = http://www.ci.la-verne.ca.us/index.php?option=com_content&task=view&id=13&Itemid=32 | accessdate = 2007-08-17] , likely a misspelling or misunderstanding of the French "le vergne," an [Citation | year = 2007 | title = "vergne - Wiktionnaire" | url = http://fr.wiktionary.org/wiki/vergne | accessdate = 2007-12-18] .Also, in Old French, "verne" is a water spring.La Verne flourished as a center of the citrus industry until after World War II, when groves grew old and were gradually bulldozed and replaced by tract homes.

There were 11,070 households out of which 35.5% had children under the age of 18 living with them, 60.0% were married couples living together, 11.5% had a female householder with no husband present, and 24.6% were non-families. 19.6% of all households were made up of individuals and 9.6% had someone living alone who was 65 years of age or older. The average household size was 2.79 and the average family size was 3.23.

The is located on 3rd Street in La Verne. is located on D Street. Is located on Fruit Street. is a Catholic, all boys school located at the intersection of Damien and Bonita Avenues.