Duffield railway station is a railway station serving the village of Duffield in Derbyshire, England. The station is located on the Midland Main Line from Derby to Leeds. It is also a junction with the former branch line to Wirksworth, which is now being reopened as the Ecclesbourne Valley heritage railway.

The unmanned station is served by East Midlands Trains, who operate local services from Derby to Matlock via the Derwent Valley Line. For journeys beginning at Duffield, the full range of tickets for travel for any destination in the country are purchased from the guard on the train at no extra cost. It is a penalty fare station however, so a permit to travel must be bought from the machine installed on the Derby-bound side of the platform before joining the train.

Services are approximately hourly. Journey time to Derby is 6 minutes and Matlock 30 minutes. 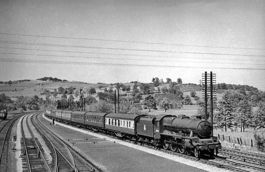 From Derby, the railway proceeds along the broad flood plain of the River Derwent, passing Little Eaton Junction, where the Midland Railway later built a branch near one of the oldest lines in the country, the Little Eaton Gangway.

The first station at Duffield was built in 1841, a year after the line opened, by the North Midland Railway a few yards further north from its present position.

From 1840 there had been a number of proposals for a line from Manchester down the Churnet Valley to meet either the Birmingham and Derby Junction Railway or the Midland Counties Railway, to go on to London. An amendment was put forward in 1844 bringing the line to the North Midland at Duffield, presumably via Ashbourne and the Ecclesbourne Valley. However, the line never materialised.

The Midland Railway, however, was looking for a path into Manchester, as an alternative to the former Manchester, Buxton, Matlock and Midlands Junction Railway from Ambergate to Rowsley which it leased jointly with the LNWR. It built a junction at Duffield which opened as far as Wirksworth in 1867.[1] Gaining sole control of the Ambergate line in 1871, the extension proved unnecessary. However, the Wirksworth branch (nowadays known as the Ecclesbourne Valley Railway) remained a busy line, with a regular passenger service and freight in the form of limestone from Wirksworth and milk from the farms along the line.

Accordingly in 1867 a large new station was built in the vee of the junction, with platforms on each side of the double track. A signal box was provided to the east of the main line, replaced by Duffield Junction box around 1890 at the south end of Platform One. By this time the population of Duffield had increased with railway workers and management, as had traffic on the main line. In 1897 a goods line was laid in the up (southbound) direction, and a fourth, down goods, laid in 1904.

There were two platforms with a footbridge, the second being an island between the two passenger lines, and another for the branch. The two subsidiary platforms each had a waiting room, while the main platform building contained the waiting room, ticket and luggage offices. Next to the footbridge was a separate W.H.Smith bookstall. The station master's house was separate, being beside the track to the north, and there was small luggage store just outside the gate. The Wirksworth line having severed the main road, which had been diverted, a footbridge gave access across the line. To the north of the station, there was wide level crossing which, besides allowing luggage trolleys to cross, gave access for the farmer who owned the adjacent land. Next to this was a footbridge from the front of the station to the field behind, and between them two signal posts, with, until 1910 a Duffield Station signal box, supplementing Duffield Junction.

The line saw several historic moments, with new or experimental vehicles from Derby being tested on the line, such as "Number 10000", the first mainline LMS diesel-electric locomotive, which was tested on the line in late 1947. Subsequently the Wirksworth branch saw Derby's first experiments with diesel railcars. The main line saw some initial test runs of the Advanced Passenger Train and, towards Derby, a length of experimental slip-paved concrete track was installed in the 70's. This can still be seen in the up line cess.

The station changed little over the years. In 1947 the signal posts were replaced with a fabricated steel gantry and upper-quadrant signals Some time later the passenger footbridge was rebuilt in brick, using the existing walkway. This is the only remaining part of the station after the buildings were removed in 1969, except for the station master's house, now a private residence, and the small luggage store which was just outside the gate.

North of Duffield the main line passes under 'The Chevin' (aka Firestone Hill) through the Milford Tunnel.

In July 2005 the station was adopted by WyvernRail plc under a scheme promoted by the Friends of the Derwent Valley Line. WyvernRail undertook to provide care and maintenance of Duffield railway station on behalf of Central Trains who operated the station at that time (and continue to under East Midlands Trains).[2]

Duffield station as it was 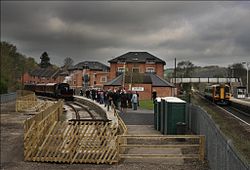 A view of Duffield station in April 2011 showing the branch platform used by the Ecclesbourne Valley Railway. On the left is a steam train recently arrived from Wirksworth, whilst on the right is an East Midlands Trains service to Matlock.

The Ecclesbourne Valley Railway runs from Duffield station Platform 3 to Ravenstor via Hazelwood, Shottle, Idridgehay and Wirksworth along the route of the old Midland Railway branch which closed to passengers in 1947 and goods in 1989.

This link was finally re-opened to passengers again in April 2011. Now the intention is for a small Booking Office and shop to be developed from a building that used to power a mobile telephone mast on the station. This development will also introduce new toilet facilities to the station that can be used during operating times of the Ecclesbourne Valley Railway, as well as much needed additional car parking space for the whole station.

However there's hope to one day reconnect with the national network once extra agreements could be made with Network Rail for permission to rejoin the network tracks (which may take a least a few years to come).