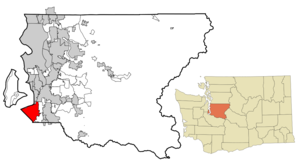 Federal Way is a city in King County, , . Federal Way is considered a by some people and is located between Seattle and Tacoma. Its western boundary is . It is bordered by Des Moines on the north, Kent, Auburn, unincorporated King County, and Milton on the east and Tacoma and Fife on the south. As of the 2000 census, the city had a total population of 83,259. The population estimates for 2008 are 88,040 making it Washington’s 8th largest city.

Originally a settlement, the area was first called "Federal Way" in 1929, when #210 was created. The name derived from U.S. Route 99 (now State Route 99 or Pacific Highway South), completed that decade, which ran through the area on its way from Everett and Seattle to Tacoma. Federal Way High School was built, and about 20 years later, the name was adopted by the local . The city was incorporated on February 28, 1990.

Federal Way is home to , the largest private owner of land in the world. Weyerhaeuser has opened much of its land to the public, including two s: the , and the Pacific Rim Collection. Federal Way is also home to the US office headquarters of .

Other attractions in the city include the Weyerhaeuser King County Aquatic Center, which features an Olympic size swimming pool and had been used for the in 1990, and Celebration Park, with sports fields and wooded trails. The city has also developed many lake front and neighborhood parks and playgrounds.

, the largest amusement park in the region, is known as Wild Waves and Enchanted Village. It is located on the south side of the city and is the area's only permanent . purchased in December 2000. However after low sales, Six Flags sold the park in April 2007 to Parc Management LLC of Jacksonville, Fl for $31.75 million.

In 2007, the city of Federal Way purchased a downtown lot formerly used by a defunct cinema, and invited proposals from two developers, and , to develop a multi-use tower project in the downtown core, adjacent to the recently-built transit center. Such a project follows in the steps of similar multi-use developments such as Kent Station in nearby Kent. The city awarded the contract to United Properties' "Symphony" project, comprising four 15-22 story towers including convert|60000|sqft|m2 of retail and office space, 900 housing units, and a large downtown park which would be relinquished to the city. Transfer of the land to United Properties followed by construction of the first tower was scheduled to start in mid- [2008] .

The city operates under the form of government, with a City Council consisting of seven at-large seats who serve for staggered two-year terms. The city mayor acts as chair of the Council and is elected by the Council from among its members. As of 2008 the mayor is Jack Dovey. The city manager is Neal Beets.

As part of the Washington State (GMA), Federal Way, along with other Puget Sound suburban cities have identified Potential Annexation Area’s (PAA’s) as areas of unincorporated King County that they feel could best be serviced by them. Federal Way has indicated interest in Auburn Hills (east of the city to the Auburn city limits), Lakeland (south and east of the city to the King/Pierce County border and east to the Auburn city limits), and Star Lake (north and east of the city to the Kent city limits). In 2004, the city annexed the Northlake, East Redondo, and Parkway neighborhoods into the city, adding over 2,700 people and nearly 1 square mile (2.57 km²) of area. Other possible annexation areas include the Jovita and Camelot neighborhoods.

In February 2007, the city announced formal plans to annex the majority of unincorporated land on its east border as one PAA named East Federal Way, comprising the Star Lake, Camelot, Lakeland, and Jovita neighborhoods,