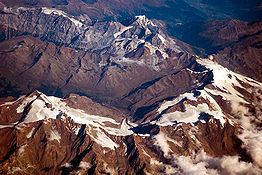 A panoramic view from Monte Vioz

The Ortler Alps (German: Ortler-Alpen; Italian: Ortles-Cevedale) are a mountain range in the central Alps of Italy. They are considered to be part of the Central Eastern Alps or the Southern Limestone Alps.

The Ortler Alps are separated from the Livigno Range in the north-west by the Stelvio Pass and the Adda River valley (Valtellina); from the Adamello-Presanella range in the south by the Tonale Pass; from the Ötztal Alps in the north-east by the upper Adige valley (Vinschgau). The part west of the Gavia Pass is also called Sobretta-Gavia Group.

The Ortler Alps are drained by the rivers Adda, Oglio, Adige and its tributary Noce.

The main peaks of the Ortler Alps are:

The main mountain passes of the Ortler Alps are:

The Ortler Alps were part of the Italian front during World War I. In this area, the Austro-Hungarians and the Italians dug in in a trench war fought at altitudes above 3,000 m (10,000 ft) for most of the war. Some trenches are still visible today, and war relics continue to be found in the area.