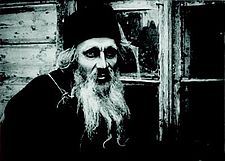 Ivan Mozzhukhin as the title character in Yakov Protazanov's 1917 film, Father Sergius. It was the last film of the Russian Empire era.

The cinema of Russia began in the Russian Empire, widely developed under the Soviet and in the years following the fall of the Soviet system, the Russian film industry would remain internationally recognised. In the 21st century, Russian cinema has become popular internationally with hits such as House of Fools, Night Watch, and the exceptionally popular Brother.

Cinema of the Russian Empire

The first films seen in the Russian Empire were brought in by the Lumière brothers, who exhibited films in Moscow and St. Petersburg in May 1896. That same month, Lumière cameraman Camille Cerf made the first film in Russia, recording the coronation of Nicholas II at the Kremlin.

Aleksandr Drankov produced the first Russian narrative film Stenka Razin, based on events told in a popular folk song and directed by Vladimir Romashkov. Ladislas Starevich made the first Russian animated film (and the first stop motion puppet film with a story) in 1910 - Lucanus Cervus. Among the notable Russian filmmakers of the era were Aleksandr Khanzhonkov and Ivan Mozzhukhin, who made Defence of Sevastopol in 1912. Yakov Protazanov made Departure of a Grand Old Man, a biographical film about Lev Tolstoy.

During World War I, imports dropped drastically, and Russian filmmakers turned out anti-German, nationalistic films. In 1916, 499 films were made in Russia, more than three times the number of just three years earlier.

The Russian Revolution brought more change, with a number of films with anti-Tsarist themes. The last significant film of the era, made in 1917, Father Sergius would become the first new film release of the Soviet era.

Cinema of the Soviet Union

Although Russian was the dominant language in films during the Soviet era, the cinema of the Soviet Union encompassed films of the Armenian SSR, Georgian SSR, Ukrainian SSR, and, to a lesser degree, Lithuanian SSR, Byelorussian SSR and Moldavian SSR. For much of the Soviet Union's history, with notable exceptions in the 1920s and the late 1980s, film content was heavily circumscribed and subject to censorship and bureaucratic state control. Despite this, Soviet films achieved significant critical success from the 1950s onwards partly as a result, similar to the cinema of other Eastern Bloc countries, for reflecting the tension between independent creativity and state-directed outcomes.

As with much Soviet art during the 1920s, films addressed major social and political events of the time. Probably the single most important film of this period was Sergei Eisenstein's The Battleship Potemkin, not only because of its depiction of events leading up to the 1905 Revolution, but also because of innovative cinematic techniques, such as the use of jump-cuts to achieve political ends. Other notable films of the period include Vsevolod Pudovkin's Mother (1926) and Dziga Vertov's Man with a Movie Camera (1929).

However, with the consolidation of Stalinist power in the Soviet Union, and the emergence of Socialist realism as state policy, which carried over from painting and sculpture into filmmaking, Soviet film became subject to almost total state control.

One of the most popular films released in 1930s was Circus.

Notable films from 1940s include Aleksandr Nevsky and Ivan the Terrible.

Immediately after the end of the Second World War, the Soviet color films such as The Stone Flower (1947), Ballad of Siberia (Сказание о земле Сибирской, 1947), and The Kuban Cossacks (Кубанские казаки, 1949) were released.

In the late 1950s and early 1960s Soviet film-makers were given a less constricted environment, and while censorship remained, films emerged which began to be recognised outside the Soviet bloc such as Ballad of a Soldier which won the 1961 BAFTA Award for Best Film and The Cranes Are Flying. Height (Высота, 1957) is considered to be one of the best films of the 1950s (it also became the foundation of the Bard movement).

The 1970s saw the emergence of a range of films which won international attention, including Andrei Tarkovsky's Solaris; Seventeen Instants of Spring, which created the immortal character of Standartenführer Stirlitz; White Sun of the Desert (1970), and "Ostern" – the Soviet Union's own take on the Western genre.

With the onset of Perestroika and Glasnost in the mid-1980s, Soviet films emerged which began to address formerly censored topics, such as drug addiction, The Needle, and sexuality and alienation in Soviet society, Little Vera.

Russian cinema of the 90s acquired new features and themes.

The drama Burnt by the Sun (1994) by Nikita Mikhalkov is a story of small countryside community when new times of Stalinism are taking pace to disrupt their idylic reclusion and distort their characters and fates. The film received an Oscar for Best Foreign Language Film.

In the context of the Russian WWII history Pavel Chukhraj filmed The thief (Вор, 1997), a movie about a mother with son seeking a manly support and finding a criminal in military clothes. The film was awarded with 6 national prizes Nika, got a special prize in Venice and became the Oscar nominee.

Made by Valery Todorovsky The Country of the Deaf (Страна глухих, 1998) comedy based on the plot of Renata Litvinova is parodying Russia of the 90s as a journey of two female friends caught in the fight of two clans - the deaf and the hearing.

The profound Dmitri Meskhiyev's melodrama Woman's property (Женская собственность, 1999) reflected subtle relationship between young student and older actress that grew into love-affair. The awaited death of one of the protagonists leaves the other facing the bitter loneliness.

Andrey Zvyagintsev's the Return won a Golden Lion award. Test of life that is tried on one of two boys when their father suddenly dies reaches deep almost mystic pitch.

The Russian Ark, 2003 by Alexander Sokurov, was filmed in a single 96-minute shot in the Russian Hermitage Museum is a dream-like narration that tells about Classic Russian culture sailing in the Ark.

Life of the Orthodox Monastery and their Christian miracles are described in the film The Island by Pavel Lungin. The film was highly acclaimed by critics and was much-awarded by spectators and prizes.

Colorful musical Stilyagi, Hipsters about young generation lifestyle in the Soviet Union was a big success for its profound and vibrant portrait of the era of the 1950s. Filmed by Valery Todorovsky in 2008.

How I Ended This Summer by Alexei Popogrebski a film shot in remote Chukotka won Berlin's Film Festival Golden Bear in 2010 and thrills upon the face-off generation gap.