The Red Kite (Milvus milvus) is a medium-large bird of prey in the family Accipitridae, which also includes many other diurnal raptors such as eagles, buzzards, and harriers. The species is currently endemic to the Western Palearctic region in Europe and northwest Africa, though formerly also occurred just outside in northern Iran.[2] It is a rare species which is resident in the milder parts of its range in western Europe and northwest Africa, but birds from northeastern and central Europe winter further south and west, reaching south to Turkey. Vagrants have reached north to Finland and south to Israel and Libya.[2]

This species was first described by Linnaeus in his Systema naturae in 1758 as Falco milvus.[3]

The Red Kite has been known to successfully hybridize with the Black Kite in captivity where both species were kept together, and in the wild on the Cape Verde Islands.[4] The Red Kites on the Cape Verde Islands are (or rather were) quite distinct in morphology, being somewhat intermediate with Black Kites. The question whether the Cape Verde Kite should be considered a distinct species (Milvus fasciicauda) or a Red Kite subspecies has not been settled. A recent mtDNA study on museum specimens suggests that Cape Verde birds did not form a monophyletic lineage among or next to Red Kites.[5]

However, this interpretation is problematic: mtDNA analysis is very susceptible to hybridization events, the evolutionary history of the Cape Verde population is not known, and the genetic relationship of Red Kites in general is very confusing, with geographical proximity being no indicator of genetic relatedness and the overall genetic similarity high,[6] perhaps indicating a relict species.

The Red Kite is 60–66 cm (24-27 in) long with a 175–195 cm wingspan; males have a weight of 800–1200 g, and females 1000–1300 g.[2] It is an elegant bird, soaring with long wings held at a dihedral, and long forked tail twisting as it changes direction. The body, upper tail and wing coverts are rufous. The white primary flight feathers contrast with the black wing tips and dark secondaries. Apart from the weight difference, the sexes are similar, but juveniles have a buff breast and belly. The call is a thin piping, similar to but less mewling than the Common Buzzard. There is also a rare white leucistic form which accounts for approximately 1% of hatchlings in the Welsh population but is at a disadvantage in the survival stakes.[7]

Differences between adults and juveniles

Adults differ from juveniles in a number of characteristics:

These differences hold throughout most of the first year of a bird's life. 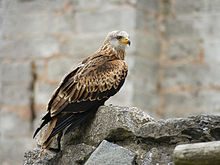 The Red Kite's diet consists mainly of small mammals such as mice, voles, shrews, young hares and rabbits. It also feeds on a wide variety of carrion including sheep carcasses and dead game birds. Live birds are also taken and occasionally reptiles and amphibians. Earthworms also form an important part of the diet, especially in the spring.[8]

As scavengers, red kites are particularly sensitive to poisoning.[9] Illegal poison baits set for foxes or crows are indiscriminate and kill protected birds and other animals.

At signs of danger a mother will signal the young who will "play dead" to the extent that a fox will believe them to be dead and leave them, thinking it can return to eat them later.[10]

Adult red kites are sedentary birds, and they occupy their breeding home range all year in the United Kingdom, though many of the global populations are migratory (particularly the Swedish population, which winters in Spain).[11] Each nesting territory can contain up to five alternative nest sites. Both birds build the nest on a main fork or a limb high in a tree, 12-20m high made of dead twigs and lined with grass or other vegetation and sheep’s wool.[8][11] 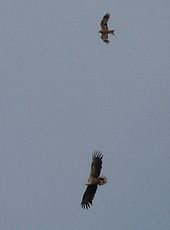 The Red Kite inhabits broadleaf woodlands, valleys and wetland edges, to 800 m. It is endemic to the western Palearctic, with the European population of 19,000-25,000 pairs encompassing 95% of its global breeding range. It breeds from Spain and Portugal east through central Europe to Ukraine, north to southern Sweden, Latvia and the UK, and south to southern Italy. There is also a population in northern Morocco. Northern birds move south in winter, mostly staying in the west of the breeding range, but also to eastern Turkey, northern Tunisia and Algeria. The three largest populations (in Germany, France and Spain, which together hold more than 75% of the global population) all declined during 1990-2000, and overall the species declined by almost 20% over the ten years. The main threats to this species are poisoning, through illegal direct poisoning and indirect poisoning due to pesticides, particularly in the wintering ranges in France and Spain, and changes in agricultural practices causing a reduction in food resources. Other threats include electrocution, hunting and trapping, deforestation, egg-collection (on a local scale) and possibly competition with the generally more successful Black Kite M. migrans.[1]

German populations declined by 25-30% between 1991 and 1997, but have remained stable since then, with the populations of the northern foothills of the Harz Mountains (the most densely populated part of its range) suffering an estimated 50% decline from 1991-2001. In Spain the species showed an overall decline in breeding population of up to 43% for the period 1994 to 2001-02, and surveys of wintering birds in 2003-04 suggest a similarly large decline in core wintering areas. The Balearic Islands population has declined from 41-47 breeding pairs in 1993 to just 10 in 2003. In France, breeding populations have decreased in the northeast, but seem to be stable in southwest and central France and Corsica. However, populations elsewhere are stable or undergoing increases. In Sweden the species has increased from 30-50 pairs in the 1970s to 1,200 breeding pairs in 2003. In Switzerland, populations increased during the 1990s, and have now stabilised.[1] However, according to a report by the Welsh Kite Trust, the UK is the only country in which the Red Kite population is increasing. Red Kites are decreasing in their three strongholds of Spain, France and Germany.[12] 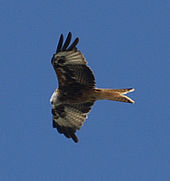 In the United Kingdom Red Kites were ubiquitous scavengers that lived on carrion and garbage. Shakespeare's King Lear describes his daughter Goneril as a detested kite, and he also wrote "when the kite builds, look to your lesser linen" in reference to them stealing washing that was hung out to dry during the nesting season. [13] In the mid 15th century King James II of Scotland decreed that they should be "killed wherever possible", but they remained protected in England and Wales for the next 100 years as they kept the streets free of carrion and rotting food.[14] Under Tudor "vermin laws" many creatures were seen as competitors for the produce of the countryside and bounties were paid by the parish for their carcasses.[15]

By the 20th century the breeding population had become restricted to a handful of pairs in Wales, but recently the Welsh population has been supplemented by re-introductions in England and Scotland. In 2004, from 375 occupied territories identified at least 216 pairs were thought to have hatched eggs and 200 pairs reared at least 286 young.[1] In 1989 six Swedish birds were released at a site in north Scotland and four Swedish and one Welsh bird in Buckinghamshire.[16] Altogether, 93 birds of Swedish and Spanish origin were released at each of the sites. In the second stage of reintroduction in 1995 and 1996, further birds were brought over from Germany to populate the areas of Dumfries and Galloway, and the Derwent Valley in North East England.[16]In Northern Ireland four pairs were released and in 2010 the first reproduction was recorded. The reintroductions in The Chilterns have been a particular success. Between 1989 and 1993 90 birds were released in the Chilterns Area of Outstanding Natural Beauty and by 2002, 139 pairs were breeding in the area.[17] Another very successful reintroduction has been in Northamptonshire, which has become a stronghold for the Red Kite[18]. Thirty Spanish birds were reintroduced into Rockingham Forest near Corby in 2000 [19], and by 2010, the RSPB estimated that over 200 chicks had been reared from that initial release. So successful has the reintroduction been that 30 chicks have been transported from Rockingham Forest, for release in Cumbria. [20]

A sighting of the first Red Kite to be seen in London for 150 years was reported in The Independent newspaper in January 2006[21] and in June of that year, the UK-based Northern Kites Project reported that kites had bred in the Derwent Valley in and around Rowlands Gill, Tyne and Wear for the first time since the re-introduction.[22]

In 1999 the Red Kite was named 'Bird of the Century' by the British Trust for Ornithology.[13]

In June 2010 the Forestry Commission North West England announced a three-year project that will see 90 Red Kites released in Grizedale Forest, Cumbria under a special licence issued by Natural England. The Grizedale programme will be the ninth reintroduction of Red Kites into different regions of the UK, and the final re-introduction phase in England.[23]

The stated aims of the Grizedale project are:

Red Kites were extinct in Ireland by the middle nineteenth century, due to persecution, poisoning and woodland clearance. In May 2007, Minister for the Environment, Heritage and Local Government Dick Roche announced an agreement to bring at least 100 birds from Wales to restock the population as part of a 5-year programme in the Wicklow Mountains, similar to the earlier Golden Eagle reintroduction programme.[25] On the 19 July 2007 the first thirty red kites were released in Co. Wicklow.[26][27] On 22 May 2010, 2 newly-hatched Red Kite chicks were discovered in the Wicklow mountains,[28] bringing the number of chicks hatched since reintroduction to 7.[29]

Populations and trends by country

The following figures (mostly estimates) have been collated from various sources.[2][30][31][32][33][34] They cover most of the countries in which Red Kites are believed to have bred.

One of the best places to see the Red Kite in Scandinavia is Scania in southern Sweden. It may be observed in one of its breeding locations such as the Kullaberg Nature Preserve near Molle.[36]

Some of the best places to see them in the UK are Gigrin Farm near Rhayader, mid Wales, where hundreds are fed by the local farmer as a tourist attraction.[37] and the nearby Nant-Yr-Arian forest recreation centre in Ceredigion[38] where the rare leucistic variant can be seen.[39] In the UK the Oxfordshire part of the Chilterns has many Red Kites.[17] They can also be seen around Harewood near Leeds where they were re-introduced in 1999.[40]