A Meter Point Administration Number, also known as MPAN, Supply Number or S-Number, is a 21-digit reference used in Great Britain to uniquely identify electricity supply points such as individual domestic residences. The gas equivalent is the Meter Point Reference Number.[1] The system was introduced in 1998 in order to provide a competitive environment for the electricity companies, and allows consumers to switch their supplier easily as well as simplifying administration. Although the name suggests that an MPAN refers to a particular meter, an MPAN can have several meters associated with it,[2] or indeed none where it is an unmetered supply. A supply receiving power from the network operator (DNO) has an Import MPAN, while generation and microgeneration projects feeding back into the DNO network are given Export MPANs.[2]

The full MPAN is required to be depicted on electricity bills (the boxes on the top and bottom line are generally unaligned):[4]

The core data is on the second line, the supplementary data on the first.[3]

The first two digits of a full MPAN reflect its profile class.[5]

Profile class 00 supplies are half-hourly (HH) metered, i.e. they record electricity consumption for every half hour of every day, and supplies of the other profile classes are non-half-hourly (NHH) metered. A NHH supply must be upgraded to HH for:[6]

HH data is recorded by the meter and will be collected usually be either an onsite download, or via a GSM, SMS, GPRS or telephone line.[4]

The MTC is a 3 digit code that reflects the various registers a meter may have, whether it be a Single Rate, Day Night split, or even a Seasonal Time of Day.[7][8]

The Line Loss Factor class is used to calculate the related Distribution Use of System (DUoS) charges for the MPAN. The figure reflects both the amount of distribution infrastructure used to supply the exit point and the amount of energy lost through heating of cables, transformers, etc.[4]

The MPAN core is the final 13 digits of the MPAN, and uniquely identifies an exit point. It consists of the two-digit Distributor ID, followed by an eight-digit unique identifier, then by two digits and a single check digit.[3] 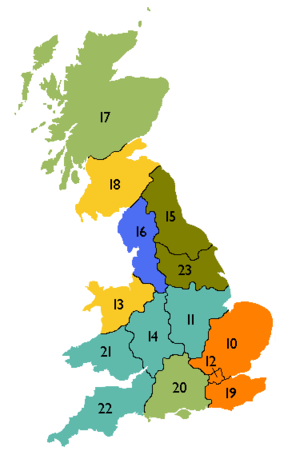 The final digit in the MPAN is the check digit, and validates the previous 12 (the core) using a modulus 11 test. The check digit is calculated thus:

The algorithm in Java is:

As a formula in Excel:

The supply identified by the MPAN can exist in one of three states: disconnected, de-energised, live.

These terms are by no means standardised. For example, a disconnected supply might be referred to as a 'dead' supply.

The vast majority of MPANs are import MPANs, used where energy is being consumed. However, if a supply exports to the distribution network, then an export MPAN is issued. If a supply both imports and exports, then both an import MPAN and export MPAN are issued.

Formerly, export MPANs required a half-hourly compliant meter to be installed. Since 2003, it has been possible for microgeneration projects, with a capacity of 50 kVA or below and a non-half-hourly meter, to export back into the distribution network. The uptake was slow with the first microgeneration export MPAN being issued in June 2005. Some suppliers may not bother to register the export MPAN in MPAS as the revenue is so small.

It is possible for small predictable supplies to be Unmetered. Typical Unmetered Supplies are Street Lights, Traffic Signals, Signs & Bollards. But can also include Telephone Kiosks, CCTV & Advertising Displays.

For a piece of equipment to be connected to the Distribution Networks via an Unmetered Connection it should not exceed 500watts and operate in a predictable nature and cannot be manually turned on at the end users request, typically the equipment would either be in operation and taking a supply of electricity 24hrs a day or be controlled by a Photocell. A Photocell is most commonly used with Street Lights and is the small dome unit which can be seen on the very top of the lighting column

It is the customer's responsibility to maintain an accurate and up-to-date inventory of Unmetered Supplies, and to inform the UMSO (UnMetered Supplies Operator) of all changes to the connected equipment.

Larger local authorities tend to trade their Unmetered energy on a Half Hourly basis. To do so, they employ a Meter Administrator[18] who will use daily data from a Pecu Array which is then used to calculate the energy consumptions.

A Pecu Array is a device what holds a representative account of the Photocells that Authority uses on their Street Lights or Traffic Signals they operate, there are many different types of Photocell (Electronic Photocell, Timeswitch & Thermal for example) that can be used. By trading energy as Unmetered Half Hourly the Authority will accurately pay for the energy consumed by their declared Unmetered Equipment, and because the data is downloaded daily the Authorities will see their energy invoices change throughout the year to represent the changes in season and daily lighting levels.

Once the daily calculations have been performed by the Meter Administrator the new revised energy consumption are sent to the appointed Data Collector who will in turn provided them to the appoint Electricity Supplier who invoices the Customer for the electricity used.

If however the Unmetered Supplies are being traded as Non Half Hourly the UMSO undertakes the responsibility to calculate an EAC (Estimated Annual Consumption), this is done using a simple formula which takes into account the Circuit Watts of the Equipment and the Annual Hours of Operations.

For example, a piece of equipment that is in use 24hrs per day will have annual hours of 8766. If we say a CCTV Camera is rated at 24 Circuit Watts and operating 24/7 the EAC would be 210.384kWh, the calculation is Circuit Watts x Annual Hours Divided by 1000 = Kilowatt Hours (kWh).

If the equipment if Street Lighting the same process is used however the Annual Hours will change as each Photocell is assigned a set number of Annual Hours which indicate how and when the lights turn on & off. These Annual Hours have been set by Elexon and are not locally agreed with the UMSO by the customer.

Once an EAC calculation has taken place an EAC Certificate is provided to the customer's appointed Electricity Supplier for billing, with an electronic copy of the EAC being sent to the appointed Data Collector.

The electricity supplier pays a DUoS Charge based on the information held by the Data Collector for settlement purposes.

Each DNO operates a Meter Point Administration System (MPAS) which holds the following information for each MPAN:

MPRS is the name of the software package that implements the MPAS system for all DNOs.[19] Since MPRS is used by most DNOs it is often used interchangeably with the term MPAS.

ECOES is a website that allows authorised parties to search for supply details (past and present) using such things as the 13-digit MPAN bottom line number, the meter serial number or the postcode. The user can determine a wide range of data relating to the supply including the full address, meter details, the current energisation status and also the appointed parties (i.e. the supplier, distributor, MOP, DC and DA). The site is populated by MPAS.[20]