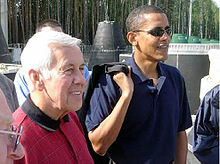 Richard Green "Dick" Lugar (born April 4, 1932) is the senior United States Senator from Indiana and a member of the Republican Party. First elected to the Senate in 1977, he is the ranking member of the Senate Committee on Foreign Relations and was its chairman from 1985 to 1987 and 2003 to 2007. Much of Lugar's work in the Senate is toward the dismantling of nuclear, biological, and chemical weapons around the world. Before his election to the United States Senate, Lugar served as mayor of Indianapolis, Indiana.

Lugar is currently the third most senior senator and the most senior Republican member of the Senate, putting him in place to be elected President pro tempore of the Senate should Republicans gain control of the body. However, Orrin Hatch disputes this claim based on a different interpretation of the Republican Conference's seniority rules.[1]

Lugar was born in Indianapolis, Indiana, to Bertha Green and Marvin Lugar.[2] He attended the public schools of Indianapolis. During this time he attained the Boy Scouts' highest rank: Eagle Scout.[3] Later, he became a recipient of the Distinguished Eagle Scout Award from the Boy Scouts of America.[4] He graduated first in his class at Shortridge High School in 1950 and from Denison University in 1954 where he was a member of Beta Theta Pi.[5] He went on to attend Pembroke College, Oxford, England, as a Rhodes Scholar, and received a degree in 1956. He served in the United States Navy from 1957 to 1960; one of his assignments was as an intelligence briefer for Admiral Arleigh Burke.

Lugar served on the Indianapolis Board of School Commissioners from 1964 to 1967. At the age of 35, he was elected mayor of Indianapolis in 1967 and began serving the first of two mayoral terms in 1968. A political cartoon of the time questioned how an Eagle Scout could survive in the world of politics.[3] He is closely associated with the adoption of Unigov in 1970, which unified the governments of Indianapolis and Marion County. The Unigov plan helped trigger Indianapolis' economic growth and earned Lugar the post of president of the National League of Cities in 1971. In 1972, Lugar was the keynote speaker at the Republican National Convention.[6] During this time he became known as "Richard Nixon's favorite mayor" due to his support for devolving federal powers to local communities.[7]

Lugar unsuccessfully sought election to the U.S. Senate as the Republican nominee in the 1974 U.S. Senate election, losing to incumbent Democrat Birch Bayh. Two years later, he ran again, unseating incumbent Senator Vance Hartke in the 1976 election. Future Governor of Indiana Mitch Daniels served as his chief of staff from 1977 to 1982.[8] During the 1980 Republican National Convention, Lugar was rumored as a potential Vice Presidential nominee for Presidential nominee Ronald Reagan.[9]

Lugar was reelected in 1982, 1988, 1994, in 2000, and in 2006. Lugar served as chairman of the National Republican Senatorial Committee during the 1984 Senate elections. In 2006, he ran without a Democratic Party challenger and earned over 87% of the vote, and won over three fourths of the votes in every county. In 1994, Lugar became the first Indiana senator to be re-elected to a fourth term. He is currently the third most senior senator.

Lugar ran for the Republican nomination for President in 1996, but his campaign failed to gain traction. His announcement of candidacy speech was made on April 19, 1995, in Indianapolis. He finished fifth in the Republican primaries, with 127,111 votes or 0.83%.

During the August recess of 2005, Lugar and freshman Senator Barack Obama visited Russia, Azerbaijan, and Ukraine to inspect nuclear facilities there.[10] He was detained for three hours at an airport in the city of Perm, near the Ural Mountains, where they were scheduled to depart for a meeting with the President and the Speaker of the House of Ukraine. He was released after a brief dialogue between U.S. and Russian officials, and the Russians later apologized for this incident. In January 2007, President Bush signed into law the Lugar-Obama Proliferation and Threat Reduction Initiative which was furthering Lugar's work with Senator Nunn in deactivating weapons in the former Soviet Union. The Lugar-Obama program focuses on terrorists and their use of multiple types of weapons.[11] 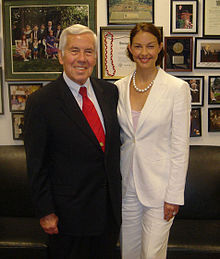 In the 2006 election, Lugar was opposed by Steve Osborn, the Libertarian candidate. The Democratic Party did not field a candidate – in part because of Lugar's popularity in Indiana – deciding instead to focus on key state and national races. Lugar won the election with 87% of the vote, the highest percentage of the 2006 senate elections despite a Democratic take-over of Washington.

Although Lugar's party is in the minority in the Senate, he has good relationships with President Obama and Vice President Joe Biden. Lugar was named an honorary co-chairman of their inauguration.[13] On the day of the final 2008 presidential debate, Lugar gave a speech at the National Defense University praising Obama's foreign policy approach, and warning against the isolationist, reactive policies espoused by Senator McCain.[14] At that debate, Obama also listed Lugar as among the individuals "who have shaped my ideas and who will be surrounding me in the White House."[15] There were rumors that either Obama or McCain would select Lugar to be Secretary of State, but that he preferred to keep his Senate seat.[11][16]

Lugar believes that the U.S. sanctions on Cuba have failed and wrote to President Obama that "additional measures are needed...to recast a policy that has not only failed to promote human rights and democracy, but also undermines our broader security and political interests."[22] He supports the Freedom to Travel to Cuba Act (S.428), which would lift the travel restrictions that have prevented U.S. citizens from visiting Cuba since the early 1960s.[23]

Lugar holds a conservative view on economy. He voted for Economic Growth and Tax Relief Reconciliation Act of 2001.[24] He voted against the American Recovery and Reinvestment Act of 2009.[25]

Senator Lugar has a generally positive stance on amnesty for illegal aliens, supporting the DREAM Act and the McCain-Kennedy Comprehensive Immigration Reform bill which died in Congress.

Lugar's blunt assessment has been viewed as significant because it showed the growing impatience and dissatisfaction with President Bush's strategy in Iraq. Lugar's speech had particular resonance given his stature as one of the party's elder statesmen on foreign policy. After Lugar finished his remarks, Senate Majority Whip Richard Durbin (D-IL), a sharp critic of the war, praised Lugar's "thoughtful, sincere and honest" speech, which Durbin said was in "finest tradition of the U.S. Senate."[29] Senator Durbin urged his Senate colleagues to take a copy of Lugar's speech home over the Fourth of July break and study it before returning to work.[29] +Senate Majority Leader Harry Reid said, in reaction to Lugar's speech: "When this war comes to an end, and it will come to an end, and the history books are written, and they will be written, I believe that Sen. Lugar's words yesterday could be remembered as a turning point in this intractable civil war in Iraq."[30]

Two days later, on June 27, 2007, Lugar said that Congressional measures aimed at curtailing U.S. military involvement in Iraq – including "so-called timetables, benchmarks" – have "no particular legal consequence," are "very partisan," and "will not work."[31]

Senator Lugar believes that judicial confirmation decisions should not be purely partisan. His view is if an appointee is properly qualified for the position by their education, integrity, and other similar factors, that they should be confirmed by the Senate. Senator Lugar introduced President George W. Bush's appointee, now Chief Justice John Roberts, to the Senate at the beginning of Roberts' confirmation process and was instrumental in securing votes to confirm Roberts for the Supreme Court. Senator Lugar was the first Republican senator to announce his support for President Barack Obama's first Supreme Court nominee United States Circuit Court of Appeals Judge Sonia Sotomayor[citation needed] and also voted in favor of his second Supreme Court nominee Solicitor General Elena Kagan.[citation needed]

Senator Lugar voted for the Federal Marriage Amendment, limiting the definition of marriage to one man and one woman.[32] However, he has also voted in favor of the Matthew Shepard Act, which expanded the federal hate crime statutes to include sexual orientation and gender identity.[33] In October 2010, Senator Lugar voted against repeal of the Don't Ask, Don't Tell policy—which prevents gays and lesbians from serving openly in the armed forces.[citation needed] However, on November 18, 2010, Senator Joe Lieberman of Connecticut announced that Senator Lugar promised to vote to repeal the policy the next time it comes up for a vote.[34] On December 18, 2010, Lugar voted against DADT repeal in both the cloture[35] and final votes.[36]

Lugar has been influential in gaining Senate ratification of treaties to reduce the world's use, production and stockpiling of nuclear, chemical, and biological weapons. In 1991, he initiated a partnership with then-Senate Armed Services Committee Chairman Sam Nunn – a fellow Eagle Scout – aiming to eliminate latent weapons of mass destruction in the former Soviet Union.[3] To date, the Nunn-Lugar Cooperative Threat Reduction program has deactivated more than 7,500 nuclear warheads. In 2004, Senators Lugar and Nunn were jointly awarded the Heinz Awards Chairman's Medal for their efforts.[37]

In October 2008 Lugar and Joe Biden, his partner in the Committee on Foreign Relations, received the Hilal-i-Pakistan (Crescent of Pakistan) Award from the government of Pakistan for their continued support of the country. In July 2008 Lugar and Biden introduced a plan that would give $1.5 billion in aid per year to support economic development in Pakistan.[38]

Senator Lugar is member of the United Methodist Church and the Indiana Society Sons of the American Revolution.[40] He married Charlene Smeltzer on September 8, 1956, and the couple has four sons and thirteen grandchildren.[5]

Lugar served on the Board of Directors of the National Endowment for Democracy from 1992 to 2001.[41]

Lugar is a member of the board of the International Foundation for Electoral Systems, an organization involved in international elections.[42]

Senator Lugar is a member of the board of the Nuclear Threat Initiative (NTI).

Lugar has received numerous awards, including Guardian of Small Business, the Spirit of Enterprise, Watchdog of the Treasury, and 42 honorary doctorate degrees. In 2001 Lugar received the Democracy Service Medal of the National Endowment for Democracy.[43]