Monster Munch is a baked corn snack available in the United Kingdom, produced by Walkers. Although the snack is largely aimed at children, it is enjoyed widely by people of all ages.

Monster Munch was launched in Britain in 1977 by Smiths. Originally called "The Prime Monster" (a play on "The Prime Minister", and as part of a wider campaign), the decision was taken to rename the snack "Monster Munch" in 1978. Advertised as "The Biggest Snack Pennies Can Buy" – in reference to the large size of the crisps – each pack featured a different monster on the front of the packet. 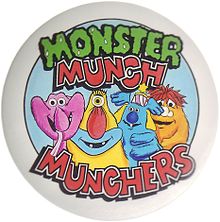 The original Monster Munch monsters as featured on a promotional badge from the 1980s.

There were four main monsters featured on the packaging, although a total of six featured in the advertising.

Monster Munch was available in a variety of flavours over the years including Roast Beef, Pickled Onion, Saucy Tomato, Bacon, Cheese & Onion, King Prawn and Salt & Vinegar.[citation needed] Pickled Onion has remained in the selection throughout the years, with Roast Beef appearing in almost every combination. By the 1990s the four main flavours available were Pickled Onion, Roast Beef, Smokey Bacon and Saucy.

The original Monster Munch used two different snack shapes, related to two of the Monsters. The shape known as a "monster paw" that is still used today is based on a monster foot. The other represented the gangly, long-tongued pink monster: circular with two bumps on the top for eyes, protrusions on either side and a tongue dangling down. For a limited time in the early 1990s, there were also spider shaped Monster Munch with a smokey bacon flavour.

A short-lived range of Monster Munch themed drinks - Monster Fizz - was available in the 1980s. The small range of flavours included orangeade.[1]

In 1995 the Monster Munch brand was taken over by Walkers who relaunched them with a range of four flavours. One of the most significant changes was that the crisps were much smaller than before. The monster characters were also redesigned.

Walkers relaunched Monster Munch with five flavours: Pickled Onion, Beef Burger, Spaghetti Sauce and Flamin' Hot and Roast Beef. Since then, the range of flavours has changed several times, such as Cheesy replacing Spaghetti Sauce (and the Blue Monster being recoloured yellow). A wide range of Tazos, featuring images of the monsters, was produced with one Tazo included in each bag.

Throughout the years there have been several limited edition flavours available for a short period of time. A "Baked Bean" flavour was made available in 2003 for Comic Relief. A "Vanilla Ice Cream" flavour was released in 2004, and was received with mostly negative reaction. This type of monster munch was non-savoury, and it contained sugar instead of salt.

Monster Munch is suitable for vegetarians.