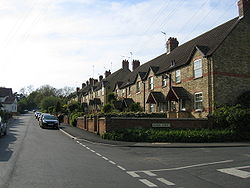 Stockton is a village and civil parish, in the Stratford-on-Avon district of Warwickshire, England. In the 2001 census it had a population of 1,391. The village is located just to the east of the A426 road two miles north-east of Southam, and eight miles south-west of Rugby.

Stockton's name was first recorded in 1272, the name meaning 'a fenced enclosure'. During the 19th century, it developed as an industrial village.

Stockton was served by the former Weedon to Leamington railway line which crosses the northern edge of the parish. The station, which was just outside the parish boundary was called Stockton & Napton and also served Napton-on-the-Hill about two miles away. The line closed to passengers in 1958 and to all traffic a few years later.

Today Stockton is largely a commuter village, The Dowdeswell plough company is nearby.

Stockton has long been associated with the manufacture of lime and cement[citation needed]. The village is surrounded by areas of blue lias clay, a raw material used in cement manufacture. This is reflected in the name of a nearby pub, the 'Blue Lias', beside the Grand Union Canal on the lane to Long Itchington (the title-deeds of the pub date back to 1809).

As early as the 1850s workings in the area were extensive and the quarries in Stockton were among the first to be dug.[1] By the early 20th century, Mssrs Charles Nelson and Co Ltd operated a large cement works half-a-mile north of the village which was closed and demolished in 1949.[2] The extensive quarries remain and are known locally as the 'cally pits' (see below).

The Nelson company was the biggest employer in the village and built the Nelson Club, a working men's club, which remains a centre of Stockton village's social life.

The works was also connected to the Warwick and Napton Canal, later part of the Grand Union system by a short canal arm leading to a loading dock; much of the company's traffic was carried on the waterways.[3][4] The arm, now truncated and silted, is still visible. There was a footbridge across the main line of the canal by the junction to give access to the cement works but no trace of the bridge remains. For many years, Nelson operated its own fleet of narrowboats which in the early years of the 20th century included three steam-powered vessels named Jason, Janet and Jupiter.[5]

Another large cement works at Southam was operated by the Rugby Portland Cement Co Ltd and was situated two miles west of the village. This establishment operated until the 1990s and quarrying continued there after manufacturing ceased. Southam was closed in 2000 when the cement works in nearby Rugby was expanded and modernised.

Part of the disused quarries and the neighbouring railway cutting are now a nature reserve.

The disused quarries have been the subject of controversy in the area for many years. In the summer of 1995 it was invaded by New Age travellers. The council tried to evict them and the night before they were due to be evicted they held an all-night rave which could be heard as far away as Long Itchington. The publicity surrounding this event caused an increase in trespass in the main larger quarries, which had long been fenced off, and this led to several accidents. Rugby Cement, who owned the site, built a substantial galvanised steel paling fence round a large part of the former quarries at a cost of roughly £70,000[citation needed].

Since this two further unpopular fences at a cost of a further £70,000 have been erected around the two other pits locally known as; The Square Pit and the Long Pit, due to their shapes. The long pit is estimated to be 35 meters deep.

As part of the wildlife preserve, which features rare Butterfly species, many changes have undergone at the site since 2008 to present. This has caused a lot of upset to locals.