The National Bank of Greece (NBG; Greek: Εθνική Τράπεζα της Ελλάδος) is the oldest and largest commercial banking group in Greece. The group has a particularly strong presence in Southeastern Europe and the Eastern Mediterranean. It owns subsidiaries in over 18 countries, including Bulgaria, Cyprus, Egypt, Republic of Macedonia, Netherlands, Romania, Russia, Serbia, South Africa, Switzerland, and Turkey.

Founded in 1841 as a commercial bank, NBG enjoyed the right to issue banknotes until the establishment of the Bank of Greece in 1928. It has been listed on the Athens Stock Exchange since the Exchange's foundation in 1880. Since October 1999, the Bank has been listed on the New York Stock Exchange. The NBG Group is involved in the investment banking services, brokerage, insurance, asset management, leasing and factoring markets.

The Bank's branch and ATM network, the largest in Greece (568 domestic banking units and 1370 ΑΤΜs), effectively covers the entire country. It is developing and expanding alternative distribution channels for its products, such as mobile and internet banking. Today, after recent acquisitions in South Eastern Europe the Group's network overseas includes 868 units. Over 9 million deposit accounts and more than 1.5 million lending accounts are held with NBG. 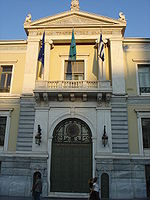 The old headquarters building of NBG in Athens