Coventry City Football Club, otherwise known as the Sky Blues owing to the traditional colour of their strip, are a professional English Football league club based in Coventry. Coventry City were founding members of the Premier League in 1992.

They currently play in the Football League Championship, the second-highest tier of the English league system, having spent 34 consecutive seasons in the top flight First Division / Premier League between 1967 and 2001. Coventry currently hold the longest tenure in the Championship league of 11 consecutive seasons. Their only major trophy was won in 1987 when they beat Tottenham Hotspur 3–2 to win the FA Cup, listed by the FA as one of the 12 classic FA Cup Finals.[3] They also reached two League Cup semi-finals in 1981 and 1990.

From 1899 to 2005, Coventry City played at the Highfield Road stadium. During the early-1980s it became the first all-seater stadium in English football, but by the end of the following decade the club's directors decided it was time to construct a larger stadium and chose a site in the Rowley's Green area of the city. The 32,609 capacity Ricoh Arena was opened in August 2005.

Coventry's home shirts are now always sky blue. However this hasn't always been the case. During the 1880s and 1890s, the club used black and red. Sky blue was first used by Coventry in 1898, the sky blue theme was then used until 1922, the colour made its return in 1962 thanks to the then manager, Jimmy Hill. In the 2008–09 season, Coventry used sky blue and white stripes, a design that was used three times that decade. This is a contrast to the late-1990s where sky blue and navy stripes were chosen three times. To mark the 125th year of the club, Coventry wore a special brown shirt in the last home game of the 2008–09 season against Watford.

In February 2007 a Former Players' Association was launched. Set up by club historian and statistician Jim Brown, former 1980s player Kirk Stephens and a committee of enthusiastic volunteers, its aim was to bring former players of the club together and cherish their memories. To qualify for free membership players have to have made at least one first team competitive appearance for the club or been a manager. Members are entitled to a ticket for any home league game.

Around 50 former stars of the club attended the launch including Coventry City legends George Hudson, Cyrille Regis, Charlie Timmins and Bill Glazier. The association's first newsletter was published in autumn 2007 and a website www.ccfpa.co.uk had been launched. The launch of 2007 was followed by subsequent Legends' Days in 2008 and 2009. The 2009 event, held at the home game against Doncaster Rovers was attended by 43 former players including the first visit to Coventry for many years of Roy Barry and Dave Clements. In December 2010 the association had 176 members.

In August 2011, after Coventry City fans became tired of broken promises from SISU, Coventry fans started to protest for the removal of SISU. Protests took place at the Jimmy Hill Statue at the Ricoh Arena before games but limited numbers turned out.[8]However after these games the number of protesters grew and so did the number of banners. After protesting near the rear entrance[9], the fans moved into the lobby and start chanting "SISU OUT" at which point a large number of "Security Response Guards" attacked the protesters and one fans camera ended up being broken. These protests were captured on film on YouTube and Featued on The Coventry Evening Telegraph [10] They also featured on football review, Midlands Today [11] and also on Mercia Radio.

To this day fans get banners into the ground and put them up to protest again SISU, who still use the Response Team to get the banners out.[12]

The club song was written in 1962 by manager Jimmy Hill and director John Camkin. It was launched at the home game with Colchester on 22 December 1962 (a match abandoned at half-time because of fog) with the words printed in the programme. It quickly became popular with supporters during the epic FA Cup run in 1963 when the then Third Division team reached the quarter-finals of the FA Cup before losing to eventual winners Manchester United. To the tune of the Eton Boating Song; 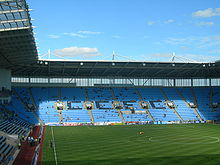 Coventry City began playing at the Highfield Road stadium in 1899, although the club did not buy the freehold to the site until 1937. The record crowd at the ground was on 29 April 1967 when 51,455 watched the Second Division title decider against Wolverhampton Wanderers. This was more than 6,000 more than the previous record set against Aston Villa in 1938. Although many people who where at that game suggest the attendance was a lot higher, possibly much over 60,000. Supporters climbed onto the roofs of the stands and up the floodlights. The ground has an interesting history. In 1940 the main stand which backed onto terraced houses in Mowbray Street was bombed by the Luftwaffe, heavy turnstiles from the ground and gas meters from houses in Mowbray Street were discovered in Gosford Park some 500 yards away. In 1968, the main stand burnt down and its replacement was built within four months. In 1981 Highfield Road was converted into England's first ever all-seater stadium with a capacity of around 24,500, which many criticised as killing the atmosphere of the ground. Some seats were removed a few years later.[1] It had been gradually upgraded since then, with the final phase of work being completed in the mid-1990s, including two fully enclosed corners. The final game played at the great stadium was against Derby County on 30 April 2005, with Coventry hammering Derby County, winning the game 6–2. Many great players graced the turf of Highfield Road, on an emotional day, the final goal at Highfield Road was fittingly scored by a homegrown youngster Andrew Whing. Other goals came from Stern John, Dele Adebola and Coventry-born player Gary McSheffrey, who scored two of the goals. One of these was from a penalty given away by the ex-City captain Mo Konjić. The land on which the stadium once stood is now a housing estate.

For the 2005–06 season, Coventry City moved to the new 32,609 capacity Ricoh Arena[13] after 106 years at Highfield Road. In 1998, the club had decided that it was time to relocate to a new stadium in the Rowleys Green area of the city, three-and-a-half miles north of the city centre and close to junction 3 of the M6 motorway. The original plan was for a state-of-the-art 45,000-seater, multipurpose stadium with removable pitch and retractable roof. It was due to be ready for the 2001–02 season and was touted to be one of the finest and most advanced stadiums in Europe. However, the club's subsequent relegation, financial problems, financier/contractor withdrawals and England's failure to secure the 2006 World Cup competition led to a radical redesign. The resulting stadium was built to a standard and somewhat uninspiring bowl design with steep stands, in line with several other new stadia builds during this period, though it is said to generate excellent acoustics (and has been used to host several major rock concerts). Despite initiating the project and being the principal attraction there, Coventry City's financial situation means that they no longer own the stadium and must pay rent to use it, this could appear to raise concerns over the managing of the clubs financies by previous club officials, as, as of the year 2001 the club were the fourth longest serving club in the top flight of English football.

The stadium naming rights were originally sold to Jaguar Cars which has strong links with Coventry. Jaguar pulled out of the project on 16 December 2004 and a new major sponsor was needed. A £10 million deal, which included naming rights, was signed and electronics manufacturer Ricoh became the new chief sponsor for the stadium. The project was funded largely by Coventry City Council & the (Alan Edward) Higgs Charity (of which former CCFC and ACL director the late Sir Derek Higgs was a trustee), and includes shopping facilities, a casino, exhibition halls and a concert venue.

At the beginning of the 2005–06 season, construction delays at the ground forced Coventry City to play their first three games of the season away and postpone their home games. On Saturday 20 August 2005, City hosted Queens Park rangers in the first-ever game at the Ricoh Arena. Coventry won the game 3–0, the first goal at the Ricoh Arena being scored by the Faroe Islands international Claus Bech Jørgensen with an 11th-minute diving header. Dele Adebola then added two more for the Sky Blues.

On 28 July 2011, a statue of Jimmy Hill was installed at the main entrance to the Ricoh Arena with Jimmy appearing in person to unveil it.

Note: Flags indicate national team as has been defined under FIFA eligibility rules. Players may hold more than one non-FIFA nationality.

Note: Flags indicate national team as has been defined under FIFA eligibility rules. Players may hold more than one non-FIFA nationality.