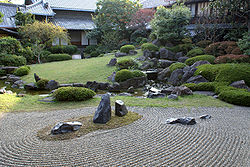 The Japanese rock gardens (枯山水, karesansui?) or "dry landscape" gardens, often called "Zen gardens", are a type of garden that features extensive use of rocks or stones, along with plants native to rocky or alpine environments that were influenced mainly by Zen Buddhism and can be found at Zen temples of meditation.

Japanese gardens are gardens in which the plants and trees are ever changing with the seasons. As they grow and mature, they are constantly sculpted to maintain and enhance the overall experience. The underlying structure of a Japanese garden is determined by the architecture; that is, the framework of enduring elements such as buildings, verandas and terraces, paths, tsukiyama (artificial hills), and stone compositions. Over time, it is only as good as the careful maintenance that it receives by those skilled in the art of training and pruning.

A brief definition of karesansui from the "Bilingual dictionary of Japanese Garden Terms":[1][2]

"Dry landscape (garden); dry garden. A garden style unique to Japan, which appeared in the Muromachi period (1392-1568). Using neither ponds nor streams, it makes symbolic representations of natural landscapes using stone arrangements, white sand, moss and pruned trees. In Sakuteiki (a garden book with notes on garden making: see the notes) of the Heian period (794-1185), the term indicated a stone arrangement in a part of the garden without water."

Unlike other traditional gardens, there is no water present in Karesansui gardens (or the karesansui compartment of a garden). There is gravel or sand, raked or not raked, that symbolizes sea, ocean, rivers or lakes.

The act of raking the gravel into a pattern recalling waves or rippling water has an aesthetic function. Zen priests practice this raking also to help their concentration. Achieving perfection of lines is not easy. Rakes are according to the patterns of ridges as desired and limited to some of the stone objects situated within the gravel area. Nonetheless often the patterns are not static. Developing variations in patterns is a creative and inspiring challenge.

Stone arrangements and other miniature elements are used to represent mountains and natural water elements and scenes, islands, rivers and waterfalls. Stone and shaped shrubs (karikomi, hako-zukuri topiary) are used interchangeably. In most gardens moss is used as a ground cover to create "land" covered by forest.

Other, mostly stone, objects are sometimes used symbolically to represent mountains, islands, boats, or even people. Karesansui gardens are often, but not always, meant to be viewed from a single vantage point from a seated position.

In the garden book Sakuteiki "Creating a garden" is expressed as "setting stones", ishi wo taten koto; literally, the "act of setting stones upright." At the time the Sakuteiki was written, the placement of stones was perceived as the primary act of gardening. Similar expressions are also used in the text, however, to mean literally "setting garden stones" rather than "creating gardens".

Make sure that all the stones, right down to the front of the arrangement, are placed with their best sides showing. If a stone has an ugly-looking top you should place it so as to give prominence to its side. Even if this means it has to lean at a considerable angle, no one will notice. There should always be more horizontal than vertical stones. If there are "running away" stones there must be "chasing" stones. If there are "leaning" stones, there must be "supporting" stones.

Note that in many cases stone and shaped shrubs (karikomi) can be used interchangeably.

The influence of Zen on garden design was (probably) first described as such by Kuck[3] in the early 20th century and disputed by Kuitert[4] by the end of that century. What is not disputed is the fact that karesansui garden scenery was (and still is) inspired (or even based on) originally Chinese and later also Japanese, landscape paintings.

Though each garden is different in its composition, they mostly use rock groupings and shrubs to represent a classic scene of mountains, valleys and waterfalls taken from Chinese landscape painting. In some of them the view also incorporates existing scenery, e.g. the hills behind, as "borrowed scenery" (using a technique called Shakkei).

Today, ink monochrome painting still is the art form most closely associated with Zen Buddhism. A primary design principle was the creation of a landscape based on, or at least greatly influenced by, the three-dimensional monochrome ink (sumi) landscape painting, sumi-e or suibokuga. In Japan the garden has the same status as a work of art.[5]

The Karesansui garden in Ryōan-ji Temple 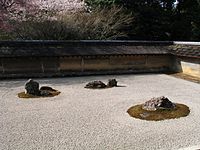 The dry garden at the Ryoan-ji

A famous Japanese rock garden is at Ryōan-ji in northwest Kyoto, Japan.

The garden is 30 meters long from east to west and 10 meters from north to south. There are no trees, just 15 irregularly shaped rocks of varying sizes, some surrounded by moss, arranged in a bed of white gravel/sand that is raked every day.

The rocks of various sizes are arranged on small white pebbles in five groups, each comprising five, two, three, two, and three rocks. The garden contains 15 rocks arranged on the surface of white pebbles in such a manner that visitors can see only 14 of them at once, from whichever angle the garden is viewed.

The garden is not attributed to any single designer, although it is commonly believed that a leading monochrome artist named Sōami (1480?-1525), in association with Daisen-in, designed it and laid it out. However, Ryōan-ji's records are contradictory and indicate some other makers, and the back of one of the 15 stones is inscribed with the names Kōtarō and Hikojirō, who might have been two of the workers that did the actual construction. 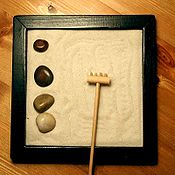 There have been many attempts to explain the karesansui garden's layout. Some of these are:

See Ryōan-ji for a mathematical analysis of a rock garden.

A recent suggestion by Gert van Tonder of Kyoto University and Michael Lyons, of Ritsumeikan University, is that the rocks form the subliminal image of a tree. The researchers claim the subconscious mind is sensitive to a subtle association between the rocks. They suggest this may be responsible for the calming effect of the garden.[6]

Shrines and temples with rock gardens:

*The Sakuteiki is a garden book with notes on garden making that dates back to the late seventeenth century. Its oldest title is Senzai Hishõ, "Secret Extracts on Gardens", and was written nearly 1000 years ago, making it the oldest work on Japanese gardening. It is assumed that this was written in the 11th century by a noble man named Tachibana no Tichitsuna. In this text lies the first mention of the karesansui in literature. Only recently we saw an English modern translation of this gardening classic.