The Rolls-Royce Olympus (originally the Bristol B.E.10 Olympus) was one of the world's first two-spool axial-flow turbojet aircraft engines, originally developed and produced by Bristol Aero Engines. First running in 1950, its initial use was as the powerplant of the Avro Vulcan V Bomber. The design was further developed for supersonic performance as part of the BAC TSR-2 programme. Later it saw production as the Rolls-Royce/Snecma Olympus 593, the powerplant for Concorde SST. Versions of the engine were licenced to Curtiss-Wright in the USA as the TJ-32 or J67 (military designation) and the TJ-38 'Zephyr'. The Olympus was also developed with success as a marine and industrial gas turbine.

Bristol Aero Engines (formerly Bristol Engine Company) merged with Armstrong Siddeley Motors in 1959 to form Bristol Siddeley Engines Limited (BSEL) which in turn was taken over by Rolls-Royce in 1966.

As of 2011, the Olympus remains in service as both a marine and industrial gas turbine. It also powers the restored Avro Vulcan XH558.

At the end of World War II, the Bristol Engine Company’s major effort was the development of the Hercules and Centaurus radial piston engines. By the end of 1946, the company had only 10 hours experience of turbojet experience with a small experimental engine called the Phoebus which was the gas generator or core of the Proteus turboprop then in development.[1] In early 1947, the parent Bristol Aeroplane Company submitted a proposal for a medium-range bomber to the same specification B46/35 which led to the Avro Vulcan and Handley Page Victor. The Bristol design was the Type 172 and was to be powered by four or six Bristol engines of 9,000 lbf (40 kN) thrust.[2]

The thrust required of the new engine, then designated B.E.10 (later Olympus), would initially be 9,000 lbf (40 kN) with growth potential to 12,000 lbf (53 kN). The pressure ratio would be an unheard of 9:1.[3] To achieve this, the initial design used a low pressure (LP) axial compressor and a high pressure (HP) centrifugal compressor, each being driven by its own single-stage turbine. This two-spool design made the compression more manageable, enabled faster acceleration, and reduced surge. The design was progressively modified and the centrifugal HP compressor was replaced by an axial HP compressor. This reduced the diameter of the new engine to the design specification of 40 in (100 cm). The Bristol Type 172 was cancelled though development continued for the Avro Vulcan and other projects.[4]

The first engine, its development designation being BOl.1 (Bristol Olympus 1), had six LP compressor stages and eight HP stages, each driven by a single-stage turbine. The combustion system was novel in that ten connected flame tubes were housed within a cannular system: a hybrid of separate flame cans and a true annular system. Separate combustion cans would have exceeded the diameter beyond the design limit and a true annular system was considered too advanced.[5] 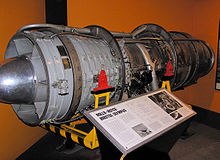 Avro Vulcan B1 and B1A 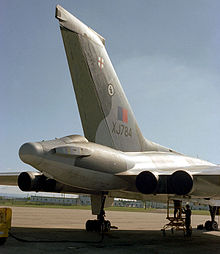 Avro Vulcan XJ784 at CFB Bagotville in 1978. It is powered by four Olympus Mk 301 engines, identified by their shorter and wider jet pipe nozzles.[19]

The initial design of the second generation 'Olympus 6' began in 1952. This was a major redesign with five LP and seven HP compressor stages and a canullar combustor with eight interconected flame tubes. In spite of a much greater mass flow, the size and weight of the BOl.6 was little different to earlier models.[20]

Rival manufacturers Rolls-Royce lobbied very hard to have its Conway engine installed in the Vulcan B2 to achieve commonality with the Victor B2. As a consequence, Bristols undertook to to complete development using company funds and peg the price to that of its fully government-funded rival.[21]

Plans to civilianise the Olympus go back as far as 1953 with the unveiling of the Avro Atlantic airliner based upon the Vulcan.[31] However, most of the civilian derivatives, except for supersonic airliners, were developed from the BOl.6. These include:

One project that got beyond the drawing board was a supersonic development of the Gloster Javelin, the P370, powered by two BOl.6, 7, or 7SR engines. The design evolved into the P376 with two BOl.21R engines rated at 28,500 lbf (127 kN) with reheat. Eighteen aircraft were ordered in 1955. The project was abandoned the following year.[35] 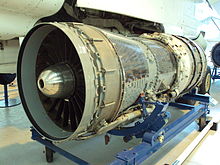 The performance specification for TSR2 was issued in 1962. It was to be powered by two BSEL Olympus Mk 320 (BOl.22R) engines rated at 30,610 lbf (136.2 kN) with reheat at take-off. The engine was a cutting edge derivative of the Olympus Mk 301 with a Solar-type afterburner.[36] The engine first ran in March 1961 and was test flown in February 1962 underslung Vulcan B1 XA894 and was demonstrated at the Farnborough Air Show in September. In December 1962 during a full power ground run at Filton, the engine blew up, completely destroying its host Vulcan in the subsequent fire.[37]

On its first flight in September 1964 the engines of the TSR-2 were scarcely flightworthy being derated and cleared for one flight. Nevertheless, the risk was deemed acceptable in the political climate of the time. With new engines, the TSR-2 flew another 23 times before the project was cancelled in 1965.[38]

The Rolls-Royce/Snecma Olympus 593 was a reheated version of the Olympus which powered the supersonic airliner Concorde.[39] The Olympus 593 project was started in 1964, using the TSR2's Olympus Mk 320 as a basis for development.[40] BSEL and Snecma Moteurs of France were to share the project.[39] Acquiring BSEL in 1966, Rolls-Royce continued as the British partner.[41]

Over the years, the Olympus was proposed for numerous other applications including: 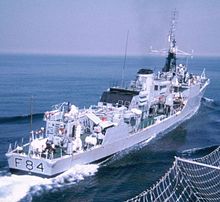 HMS Exmouth, the first warship to be entirely propelled by gas turbines.

The first marine Olympus was built for the German Navy. In 1962 BSEL was contracted to provide the gas-generator and Brown Boveri was contracted to provide a two-stage long-life marine power turbine. A test bed was built for extensive shore trials. Construction of the ship which was intended for gas-turbine power was abandoned. Test running of the next marine Olympus began in 1966. The power turbine was of a single stage operating at 5600 rpm utilising wide-chord blades. Beginning its sea trials in early 1968, the Turunmaa, a 700 ton corvette of the Finnish Navy was the first Olympus-powered warship to enter service, some six months before HMS Exmouth, the first British ship which had been refitted to trial the propulsion system for the Royal Navy.[53]

The Olympus entered service as a peak demand industrial power generator in 1962 when the Central Electricity Generating Board (CEGB) commissioned a single prototype installation at its Hams Hall power station. Power was provided by an Olympus 201 exhausting through a two stage turbine powering a Brush synchronous alternator providing 20 MW at 3000 rpm. By 1972, the CEGB had installed 42 Olympus generating sets.[69]

Many sets were exported and many found use on offshore platforms. By 1990, over 320 sets had been sold to 21 countries,[70] many of which remain in service.