Al Gore, the 45th Vice President of the United States under Bill Clinton, announced his candidacy for the presidency of the United States in Carthage, Tennessee on June 16, 1999. Gore became the nominee of the Democratic Party for the 2000 presidential election on August 17, 2000. Victory in the general election would have made Gore the first Democrat since the Civil War to succeed another Democrat to the Presidency by election in his own right.

Prior to his announcement that he would be running in the 2000 election, Gore participated in a March 9, 1999 interview for CNN's Late Edition with Wolf Blitzer. Gore stated in the interview, "During my service in the United States Congress I took the initiative in creating the internet. I took the initiative in moving forward a whole range of initiatives that have proven to be important to our country's economic growth and environmental protection, improvements in our educational system."[3] Former UCLA professor of information studies, Philip E. Agre [4][5] and journalist Eric Boehlert[6] both argue that three articles in Wired News led to the creation of the widely spread urban legend that Gore claimed to have "invented the Internet," which followed this interview.[7] This urban legend became "an automatic laugh. Jay Leno, David Letterman, or any other comedic talent can crack a joke about Al Gore 'inventing the Internet,' and the audience is likely to respond with howls of laughter."[8]

In response to the controversy, Vint Cerf and Bob Kahn argued that they didn't think, "as some people have argued, that Gore intended to claim he 'invented' the Internet. Moreover, there is no question in our minds that while serving as Senator, Gore's initiatives had a significant and beneficial effect on the still-evolving Internet."[9]

Gore would later poke fun at the controversy on the The Late Show with David Letterman when he read Letterman's Top 10 List, which for this show was called, "Top Ten Rejected Gore - Lieberman Campaign Slogans." Number nine on the list was: "Remember, America, I gave you the Internet, and I can take it away!"[10] A few years later, on June 6, 2005, Gore was awarded the Lifetime Achievement Award "for three decades of contributions to the Internet" at the Webby Awards.[11][12]

There was talk of a potential run for president by Gore as early as January 1998.[13] Gore formally announced his candidacy for president on June 16, 1999, in Carthage, Tennessee. [14] He was introduced by his eldest daughter, Karenna Gore Schiff, who was pregnant at the time with her first child.[14] The speech was "briefly interrupted" by AIDS protesters claiming Gore was working with the pharmaceutical industry to prevent access to generic medicines for poor nations.[14] Additional speeches were also interrupted by the protesters. Gore responded, "I love this country. I love the First Amendment [...] Let me say in response to those who may have chosen an inappropriate way to make their point, that actually the crisis of AIDS in Africa is one that should command the attention of people in the United States and around the world."[15] In making the announcement, Gore also distanced himself from Bill Clinton, whom he stated had lied to him.[14] In an interview for 20/20 Gore stated, "What he did was inexcusable, and particularly as a father, I felt that it was terribly wrong."

Gore faced an early challenge by former New Jersey senator Bill Bradley.[14] Bradley was the only candidate to oppose Gore [16] and was considered a "fresh face" for the White House."[17] Bradley, in comparing himself with the current administration, argued that "One of the reasons I'm running for president is to restore trust and public service and confidence in our collective will."[16] By the fall of 1999, a number of polls showed Bradley running even with the Vice President in key primary states."[17] Gore responded by switching his campaign headquarters from Washington, D.C., to Nashville, Tennessee, in an effort to further distance himself from Bill Clinton[18] Gore then challenged Bradley to a series of debates which took the form of "town hall" meetings.[19] Gore went on the offensive during these debates [20] leading to a drop in the polls for Bradley.[21] Gore eventually went on to win every primary and caucus and in March 2000, secured the Democratic nomination.[22]

In August 2000 Gore announced that he had selected Senator Joe Lieberman of Connecticut as his vice presidential running mate. Lieberman became "the first person of the Jewish faith to run for the nation's second-highest office" (Barry Goldwater, who ran for president in 1964, was of "Jewish origin").[24] Lieberman, who was a more conservative Democrat than Gore, had publicly blasted President Clinton for the Monica Lewinsky affair. Many pundits saw Gore's choice of Lieberman as another way of trying to distance himself from the scandals of the Clinton White House.[25] Lieberman was selected from a group of potential running mates that included Senator John Kerry of Massachusetts and Senator John Edwards from North Carolina, both of whom ended up on the Democratic Ticket in 2004. [26]

Gore's daughter, Karenna, together with her father's former Harvard roommate Tommy Lee Jones,[27] officially nominated Gore as the Democratic presidential candidate during the 2000 Democratic National Convention in Los Angeles.[28] Gore accepted his party's nomination and spoke about the major themes of his campaign, stating in particular his plan to extend Medicare to pay for prescription drugs, to work for a sensible universal health-care system.[28]

Soon after the convention, with running mate Joe Lieberman, Gore hit the campaign trail. He and Bush were deadlocked in the polls.[29] During his first presidential run in 1988, Gore ran his campaign as "a Southern centrist, [who] opposed federal funding for abortion. He favored a moment of silence for prayer in the schools and voted against banning the interstate sale of handguns."[30] Gore's policies changed substantially during the 2000 campaign, reflecting his eight years as Vice President.[31] According to an article by PBS, Gore

promised to appoint pro-choice judges with more liberal leanings. Gore appointees are more likely to support gay rights and maintain a separation between religion and government [...] Gore has vowed to maintain a firm distinction between Church and State, and doesn't focus on religion as a major issue. However, Gore has promoted government partnerships with faith-based groups. His running mate, Senator Joe Lieberman, is an observant Jew and often talks about increasing the role of religion in public life [...] During Gore's eight years as vice president, the Clinton administration appointed 150 homosexuals to government posts. Al Gore says he wants to lift the "don't ask, don't tell" policy on gays in the military, which was supported by President Clinton. Gore has also promised to work toward expanding gay rights, and supports legislation such as the Hate Crime Prevention Act that would broaden the definition of hate crimes to include crimes committed against gay people.[31]

Gore and Bush participated in three televised debates. While critics debated over who won the first debate, they focused on the presentation style of each of the candidates. Issues of style and presentation would continue to be a theme throughout the election. Bush, during the debate, appeared to be a " 'deer in the headlights' in the first debate. But the governor was relaxed and authentic, and he seemed at ease on the same stage with the sitting vice president [...] Gore may have been more aggressive on issues, and he surely was more detailed. But the vice president also looked and sounded about as appealing as a case of the flu. His makeup was terrible, and his comments sounded canned. Gore has always had problems sounding natural, and his first debate performance made him look like a phony politician, not a sincere leader."[29] After the second debate, Gore was criticized as too "reticent" while Bush was "relaxed and self-confident." [29] Finally, critics argued that Gore's performance during the third debate was too aggressive.[32] 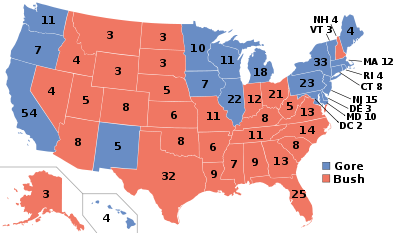 On election night, news networks first called Florida for Gore, later retracted the projection, and then called Florida for Bush, before finally retracting that projection as well.[33]Florida Secretary of State Republican Katherine Harris eventually certified the Florida count.[34] This led to the Florida election recount, a move to further examine the Florida results.The Florida recount was stopped a few weeks later by the Supreme Court of the United States. In the ruling, Bush v. Gore, the Florida recount was called unconstitutional and that no constitutionally valid recount could be completed by the December 12 deadline, effectively ending the recounts. This 7-2 vote ruled that the standards the Florida Supreme Court provided for a recount as unconstitutional due to violations of the Equal Protection Clause of the Fourteenth Amendment, and further ruled 5-4 that no constitutionally valid recount could be completed by the December 12 deadline. This case ordered an end to recounting underway in selected Florida counties, effectively giving George W. Bush a 534 vote victory in Florida and consequently Florida's 25 electoral votes and the presidency.[35][36] The results of the decision led to Gore winning the popular vote by approximately 500,000 votes nationwide, but receiving 266 electoral votes(1 DC Elector abstained) to Bush's 271.[37] Gore strongly disagreed with the Court's decision, but said "for the sake of our unity as a people and the strength of our democracy, I offer my concession."[38][39]

In the introduction to his global warming presentation, Gore later jokingly introduced himself as "the former next President of the United States".[40] Gore became the fourth candidate in American history to win the popular vote but lose the electoral vote.[41]

There were a number of theories connected to Gore's loss. Gore, according to a 2002 NPR article, attributed it to "the economic downturn and stock market slide that began earlier that year."[42] His running mate, Joe Lieberman, criticized Gore for adopting a populist theme, stating that he had objected to Gore's "people vs. the powerful" message, as he believed that it was not the best strategy for a Democratic win (Lieberman also stated that he would still endorse Gore if he decided to run for the 2004 election).[43] Other critics attributed Gore's loss in part to Green Party candidate Ralph Nader who garnered 2.7 % of the vote, enough of whose votes which they argued might have otherwise gone to Gore to swing the result.[44][45]

Another theory suggests that Al Gore attempted to run a populist campaign but failed to separate himself from the abuses of the Clinton presidency. The public was not able to forget the Campaign fund raising controversy at the Hsi Lai Temple 1996 United States campaign finance controversy. There is also a theory concerning Al Gore first campaign interviews on CNN [46].

A few years later, Gore began to make a number of television appearances in which he displayed a willingness to poke fun at himself, such as in episodes of Futurama and Saturday Night Live.[47][48] Some argued that this was evidence that he was "presenting a whole new side of himself" to contradict the perception of a persona "often associated with stiffness and caution." There was further speculation that it was indicative of a 2004 presidential run.[47]

The election is the subject of a 2008 made-for-TV movie directed by Jay Roach, produced by, and starring Kevin Spacey called Recount. It premiered on the HBO cable network on May 25, 2008.