This article concerns the Argentine base named after the ship Corvette Uruguay (Corbeta Uruguay), for the article concerning the ship, see ARA Uruguay. 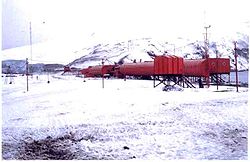 The Corbeta Uruguay station on Southern Thule in 1981

Corbeta Uruguay was an Argentine military outpost established in November 1976 on the island of Thule, Southern Thule, in the South Sandwich Islands. The base was established by order of the then-military junta governing Argentina as a way to back up its territorial claims on British territory in the South Atlantic. Britain discovered the base in December 1976 but sought a diplomatic solution to the issue until 1982.

Early in the Falklands Conflict, 32 special forces troops from Corbeta Uruguay were brought by the Argentine Navy ship Bahía Paraiso to South Georgia and landed at Leith Harbour on March 25, 1982.

Corbeta Uruguay retained Argentine personnel until June 20, 1982, when British forces, fresh from victory over Argentina in the Falkland Islands, sent a task force to Thule Island to end the Argentine presence. After the Argentine garrison at Corbeta Uruguay surrendered, Thule Island was emptied and the facility left unmanned. In December 1982, it was mostly demolished by the Royal Navy after a patrolling warship (HMS Hecate) discovered that someone had taken down the Union Jack from the base flagpole and run up the Argentine Flag.

The name honoured the Argentine corvette ARA Uruguay that rescued Otto Nordenskjöld and his crew in 1903 in the Antarctic Peninsula, near the present-day Esperanza Base. This ship is now a floating museum, permanently berthed in Puerto Madero, Buenos Aires.