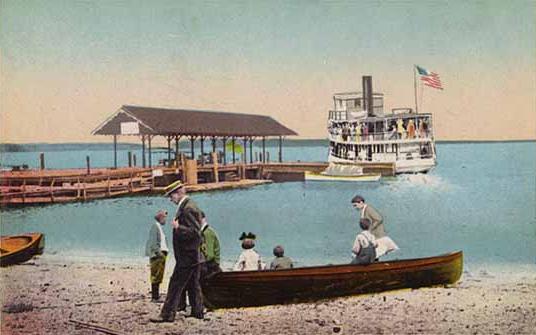 Standish is a town in Cumberland County, , . The population was 9,285 at the 2000 census. It includes the villages of Standish Corner, Sebago Lake Village and Steep Falls, and the localities known as Richville, Standish Neck and Two Trails. Standish is part of the Portland-South Portland-Biddeford, Maine Metropolitan Statistical Area.

This was once hunting and fishing territory of the Sokokis Indians, whose main village was at Pequawket (now Fryeburg) up the Pequawket Trail (Route 113). In 1750, the granted the township to Captain Moses Pearson and Captain Humphrey Hobbs, together with their respective companies, for services during the . It was to be called Pearson and Hobbs Town, but Hobbs died and none of his company took possession. In 1752, the land was surveyed and divided into 30 acre lots, although some soldiers sold their rights for whatever they could get. Those that did settle found their cabins razed by Indians trying to drive them away. In response, the veterans built at Standish Corner a d fort, which provided protection until Indian hostilities ceased in 1759 with the . Pearsontown Plantation was incorporated as Standish on , .

Much of Standish is sandy plains covered with , yet s found considerable . s at various streams produced , headings, shooks, barrel staves, s, , , , and packing boxes. The opened in 1832, increasing trade between and Portland. It was followed by the , which on , began regular passenger service between Portland and Sebago Lake Station. Tourists could arrive by in the morning, ride a side-wheel the whole length of the lakes, then return to the city by evening. The cost of the excursion in 1876 was $1.75 from Portland to Naples, and $2.00 from Portland to Bridgton, North Bridgton or Harrison. Standish also had s at Richville and Steep Falls. In 1998, Frye Island in Sebago Lake was set off and incorporated as a separate town. Today, Standish is both a recreational area and suburb of Portland.

The town is crossed by state routes 11, 25, 25A, 35, 35A, 114 and 237. It borders the towns of Windham and Gorham to the southeast, Buxton and Hollis to the south, Limington to the west, and Baldwin and Sebago to the northwest.

There were 3,205 households out of which 37.0% had children under the age of 18 living with them, 64.0% were married couples living together, 8.9% had a female householder with no husband present, and 23.1% were non-families. 16.7% of all households were made up of individuals and 6.0% had someone living alone who was 65 years of age or older. The average household size was 2.72 and the average family size was 3.03.

* is a public serving the towns of Buxton, Hollis, Limington and Standish
* has its campus in Standish