Origin of the term

The word "ḥumash" may be a misreading of ḥomesh, meaning "one-fifth", alluding to any one of the five books: as the Hebrew חומש has no vowel signs, it could be read either way. It could also be regarded as a back-formed singular of ḥumashim/ḥumshei (which is in fact the plural of ḥomesh).

In early scribal practice there was a distinction between a Sefer Torah, containing the entire Pentateuch on a parchment scroll, and a copy of one of the five books on its own, which was generally bound in codex form, like a modern book, and had a lesser degree of sanctity. The term ḥomesh strictly applies to one of these. Thus, ḥomesh B'reshit strictly means "the Genesis fifth", but was misread as ḥumash, B'reshit and interpreted as meaning "The Pentateuch: Genesis", as if "ḥumash" was the name of the book and "Bereshit" the name of one of its parts. Compare the misunderstanding of "Tur" to mean the entirety of the Arba'ah Turim.[citation needed]

In the legal codes, such as Maimonides' Mishneh Torah, it is laid down that any copy of the Pentateuch which does not comply with the strict rules for a Sefer Torah, for example because it is not a parchment scroll or contains vowel signs, has only the same sanctity as a copy of an individual book (ḥomesh). In this way, the word ḥomesh (or ḥumash) came to have the extended sense of any copy of the Pentateuch other than a Sefer Torah.

The word ḥumash generally only refers to "book" bound editions of the Pentateuch, whereas the "scroll" form is called a sefer Torah ("book [of the] Torah"). 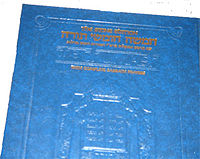