Mandopop (simplified Chinese: 华语流行音乐; traditional Chinese: 華語流行音樂; pinyin: Huáyǔ liúxíng yīnyuè) is a colloquial abbreviation for "Mandarin popular music." It is categorized as a subgenre of commercial Chinese-language music within C-pop. Mandopop was the first variety of popular music in Chinese to establish itself as a viable industry. As the name implies, Mandopop features songs performed mainly in Mandarin Chinese. Consumers of the music include fans, especially Mandarin speakers, in China, Malaysia, Singapore, Taiwan, Japan and other countries.

The origin of commercial Chinese-language music began with the gramophone, a technological innovation brought to Tibet Road in Shanghai by a Frenchman named Labansat.[1] Baak Doi (Chinese: 百代; pinyin: bǎi dài) was the first record company to serve as the backbone for the young industry.

Mandarin pop songs in the 1920s were called shidaiqu (時代曲 - meaning music of the time, thus popular music). They are considered the prototype of any Chinese pop song.[2] Location-wise, Shanghai was the center and quintessential hub for mandopop. Li Jinhui is generally regarded as the "Father of Chinese Popular Music", having established the genre in the 1920s.[3] Buck Clayton, the American jazz musician, also worked alongside Li. Some music enthusiasts suggest that Shidaiqu is the basic form of all Mandarin pop songs up until the transition to Cantopop. The Bright Moonlight Song and Dance Troupe (明月歌舞团), established by Li, is also the first modern musical division to be integrated into the Lianhua Film Company in 1931, making it the first pop music division to enter any Chinese film industry.

The original "Seven Great Singing Stars" in the Republic of China period secured the place of the genre in Asian society. The singers' style was unlike any Chinese-language music that had come before it. The young film industry took advantage and engaged singers for acting and soundtrack roles. Zhou Xuan (Chinese: 周璇; pinyin: Zhōu Xuán）is generally considered the most remarkable Chinese pop star of the era due to her successful singing and film career. This generation saw female singers rise in popularity from "song girls" to "stars".[3] The era came to an abrupt end when Japanese armies occupied Shanghai during the Second Sino-Japanese War and World War II.

In 1949, the People's Republic of China was established by the communist party. One of the first actions taken by the government was to denounce popular music as pornography.[4] In the mainland, the communist regime would begin suppressing pop music in order to promote revolutionary songs.

The Chinese Nationalists' retreat to Taiwan following the Chinese Civil War had established the Republic of China on Taiwan with its capital city Taipei as the new center of Mandopop. Taiwanese youth were drawn to popular styles from abroad in part because the Japanese, who had governed Taiwan since the end of the nineteenth century through World War II, were themselves keen consumers of international entertainment. Popular songs necessarily employed Mandarin after the war though, because Taiwan's new rulers, the KMT, mandated its use, forbidding Japanese and restricting the use of Taiwanese, the actual mother tongue of most of the island's residents.[5] Where Taiwanese pop had existed in the shadow of Japanese pop during Japanese rule, it now operated in the shadow of Mandopop during KMT rule.

The 1960s was a highly politically tense era. Some songs in Taiwan such as "Not Going Home Today" (今天不回家) by Yao Surong (姚蘇蓉) were prohibited.[6]

In 1979, Singapore launched the Speak Mandarin Campaign to promote the use of Mandarin over the range of Chinese dialects spoken by various segments of the ethnic-Chinese population. Mandarin songs therefore began to replace Hokkien and Cantonese songs on the radio stations and on television.[7]

Teresa Teng (simplified Chinese: 邓丽君; traditional Chinese: 鄧麗君; pinyin: Dèng Lìjūn) made Mandopop a true mainstay by crossing over to mainland China. Even in the height of censorship, the mainland lifted the ban on Teng in 1986 and proclaimed that "By day, Deng Xiaoping rules China. But by night, Deng Lijun (Teresa Teng) rules".[8] Her songs were considered "Bourgeois Music" by mainland officials.[9]

The popularity of Lo Ta-yu (simplified Chinese: 罗大佑; traditional Chinese: 羅大佑; pinyin: Luó Dàyòu) drove demand for the music to new heights. One of the most successful songs of the era was Lo Ta-yu's "Tomorrow will be Better" (明天會更好/明天会更好). The song was originally performed in 1985 by 60 singers.[10] It quickly became a hit throughout Asia and established itself as a standard. Another song soon followed in 1986 in mainland China called "Let the World be filled with Love" (讓世界充滿愛).[11] At the time, these songs were inspired by the American song "We Are the World".[10][11]

Faye Wong (王菲) became the first Chinese singer to perform in Budokan, Japan. For this reason she is also called the Diva of Asia.[12][13]

During this period, singers from Hong Kong such as the Four Heavenly Kings - Aaron Kwok, Leon Lai, Andy Lau and Jacky Cheung - also began to dominate Mandopop. Nonetheless, Taiwan has their own popular singers such as Stella Chang, Sky Wu, Wakin Chau (formerly Emil Chau) and Jeff Chang. Rock Records began to emerge in this period as the most influential of the independent labels. 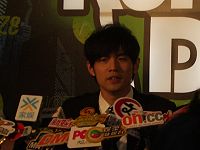 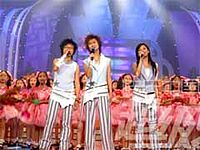 The 2000s began with an explosion of pop idols, mainly from Taiwan. Mainland China has rapidly increase a large number of Mandopop singers, bands, and idol groups as pop music becomes increasingly mainstream by mid-2000s. The growing Mainland film industry and Chinese television drama also increased demand for Mandopop. Jay Chou led the popularity of rhythm and blues and rap music in the scene. Other successful singers include Stefanie Sun, David Tao, Jolin Tsai and Leehom Wang. While many Cantopop singers also turning towards Mandopop industry due to disputes among entertainment and record companies in Hong Kong and also to increase their fan base.

In recent years, the burgeoning number of contests have brought an idol concept (偶像, ǒuxiàng) to the Mandopop industry. Nationwide singing competitions in mainland China, such as the Super Girl and Super Boy, have greatly boosted Mandopop's influence many contestants emerge as successful singers such as Chris Lee (Li Yuchun), Jason Zhang Jie, Jane Zhang Liangying, and Chen Chusheng. In Taiwan, the term "quality idol" (優質偶像, yōuzhì ǒuxiàng) has entered the popular lexicon, referring to Mandopop singers who are good-looking, talented and highly educated, among them Wang Leehom and Wei Li-an.[14]

The guqin and pipa are some of the first instruments used during shidaiqu's early mandopop era. Today's mandopop arrangements are quite westernized, covering many musical styles, including rhythm and blues, ballads, Pop. A few Chinese pop musicians, most notably Jay Chou, Lin Jun Jie, and Leehom Wang, have experimented with fusing traditional Chinese instruments with western influences.

Influential artists like Leehom Wang and David Tao, who use both traditional Chinese instruments and mainstream western hip hop melodies, have influenced many Asian singers worldwide.

While China has the largest Mandarin-speaking population, Taiwan is the most significant hub of the genre.[15] The trend is that most artists are branded by where they come from regardless of where they were actually marketed. Mandopop stars come mainly from Taiwan, Hong Kong, China, Singapore and Malaysia.