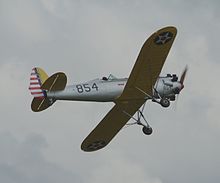 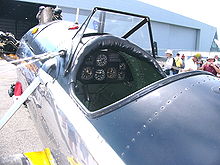 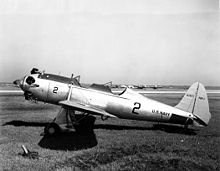 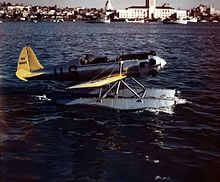 The Ryan STs were a series of two seat, low-wing monoplane aircraft built by the Ryan Aeronautical Company. They were used as sport aircraft, as well as trainers by flying schools and the military of several countries.

T. Claude Ryan was the founder of the Ryan Aeronautical Company, the second incarnation of a company with this name, and the fourth company with which he had been involved to bear his name[1] (the first, Ryan Airlines, was the manufacturer of the Ryan NYP, more famously known as the Spirit of St. Louis). He began the development of the ST (for "Sport Trainer", and also known as S-T), the first design of the company, in 1933.[2]

The ST featured two open cockpits in tandem in a metal semi-monocoque fuselage of two main frames - one steel, the other half of steel and half of aluminium alloy (alclad) - to take the loads from the wing spars and six more alclad frames; and alclad skin.[3] It had wings in three sections of hybrid construction; the centre section integral with the fuselage had tubular steel spars, the front spar a simple tube with an external brace to the upper fuselage, and the rear spar in the form of a parallel chord truss.[3] The two outer wing panels had wooden spars and alclad ribs, with diagonal rods bracing the wings internally. Alclad sheet was used to form the leading edges, and fabric covered the whole structure. When attached the outer wings were braced with flying wires to the fixed conventional landing gear and landing wires to the upper fuselage.[3]

Five STs were built[4] before the follow-on ST-A (also S-T-A) (A for Aerobatic) was developed with a more powerful engine. A single ST-B was produced, this being an ST-A with only one seat and an extra fuel tank where the front cockpit normally was; this aircraft was subsequently converted back to ST-A standard.[5] The ST-A was further developed as the ST-A Special, with an engine of increased power.

In 1937 the ST-A Special was developed into a military version, the STM (also ST-M) series. Changes included wider cockpits to enable military pilots to enter and exit while wearing parachutes, and provision for a machine gun on some examples[4]. Variants in the series included the STM-2P single-seat version armed with a machine gun delivered to Nationalist China; and the STM-S2, which could be fitted with landing gear or with EDO Model 1965 floats.[3][6]

After the ST-M came the ST-3, a substantial redesign in 1941 partly brought about by the unreliability of the Menasco engines fitted to STs to that point. The United States Army Air Corps (USAAC) had purchased several dozen ST-M variants under various designations and had Ryan Aeronautical re-engine most with Kinner R-440 radial engines.[4][7] The USAAC found the modification to be beneficial and asked Ryan Aeronautical to design a variant with this engine as standard, and with airframe modifications considered desirable from in-service experience. The ST-3 that resulted featured a longer and more circular wider fuselage, this being suggested by the circular radial engine. Other changes included a revised rudder, balanced ailerons and elevators, and strengthened main landing gear with the legs spaced further apart. The streamlining spats covering the mainwheels, found on ST series aircraft to that point, were deleted as well.[1] The ST-3 served as the basis for military versions ordered by the USAAC and the United States Navy (USN).[4]

The ST-3 gave rise to another model developed in 1941 and early 1942, this was the ST-3KR (for Kinner Radial). The ST-3KR had a more powerful Kinner R-5 engine fitted and became the definitive model; more than 1,000 military versions were built during World War II as PT-22 Recruits.[4] The final variant was the ST-4, which was a version of the ST-3 with a wooden fuselage, developed in case a shortage of "strategic materials" (i.e. of metal) developed. Such a shortage did not eventuate and the ST-4 was not put into mass-production.[4]

The first Ryan ST flew for the first time on 8 June 1934[1] and production began the following year, when nine aircraft were delivered.[7] Except for 1937 (when 46 aircraft were built), production rates remained low for several years, at about one aircraft every two weeks. This changed in 1940 when deliveries to military forces began in earnest; production that year was just under three aircraft per week.[7] Total production of civil and military aircraft prior to the entry of the United States into World War II amounted to 315.[7][8] Another 1,253 military versions were produced in 1942 and 1943, for a total of 1,568 aircraft of all models.

Most civil aircraft in the ST series were delivered in the United States, although a few were exported to South Africa, Australia and various countries in Latin America. An example of the ST-A was procured by the USAAC in 1939 for evaluation as the XPT-16. This was followed by 15 YPT-16s, the first time the USAAC had ordered a monoplane trainer. These were the first of more than 1,000 Ryan STs to serve the USAAC, its successor the United States Army Air Forces (USAAF) and the USN.[9][10]

A large number of STMs were exported in the 1930s and early 1940s (prior to the entry of the United States into World War Two) to various Air forces, with the biggest customer being the military of the Netherlands East Indies (NEI, now Indonesia). The NEI Army and Navy took delivery of 84 STM-2s and 24 STM-S2s in 1940 and early 1941.[1][7][8][11] Another 50 STM-2Es and STM-2Ps were exported to Nationalist China, while others were exported to Bolivia, Ecuador, Guatemala, Honduras, Mexico and Nicaragua.[4]

After the Japanese invasion of the NEI many Ryans in that country were pressed into combat, especially in reconnaissance roles, and large numbers were shot down or destroyed on the ground.[12] Surviving STM-2s and STM-S2s that were not captured by the Japanese were shipped to Australia, where 34 entered service in the Royal Australian Air Force as trainers. Many of those that survived until the end of World War Two were then placed on the civil register in Australia and elsewhere, and some are still flying almost 70 years after they were built.[6][13][14] 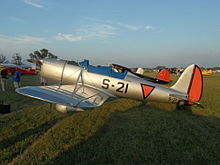 A surviving Ryan STM-S2 in Australia

ST
Prototype and first model, fitted with a Menasco B4 engine of 95 hp; five built.

ST-B
Single-seat variant of ST-A with extra fuel tank in place of front cockpit; one built, later converted to ST-A.

STM
Military version of ST-A Special with wider cockpits, some with provision for a machine gun; 22 built.

STM-2P
Single-seat variant of the STM-2E with provision for a machine gun, also delivered to China; 2 built.

ST-3
Variant with new fuselage shape and a Kinner B-5 radial engine of 125 hp; one built.

ST-4
Variant of ST-3 manufactured with wooden fuselage; one built. 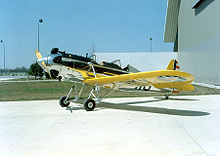