Clarenceux King of Arms is an officer of arms at the College of Arms in London. Clarenceux is the senior of the two provincial kings of arms and his jurisdiction is that part of England south of the River Trent. The office almost certainly existed in 1420, and there is a fair degree of probability that there was a Claroncell rex heraldus armorum in 1334. There are also some early references to the southern part of England being termed Surroy, but there is not firm evidence that there was ever a king of arms so called. The title of Clarenceux is supposedly derived from either the Honour (or estates of dominion) of the Clare earls of Gloucester, or from the Dukedom of Clarence (1362). With minor variations, the arms of Clarenceux have, from the late fifteenth century, been blazoned as Argent a Cross on a Chief Gules a Lion passant guardant crowned with an open Crown Or.

Holders of the office 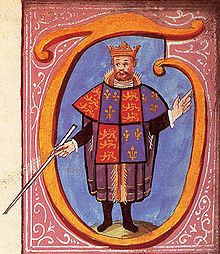 The current Clarenceux King of Arms, Patric Laurence Dickinson, on Garter Day, dressed in the robe of the Secretary of the Order.