The College of Arms, or Heralds’ College, is an office regulating heraldry and granting new armorial bearings for England, Wales and Northern Ireland. It was founded in 1484 by King Richard III, and is a private corporate body consisting of the professional heralds who are delegated heraldic authority by the British monarch. 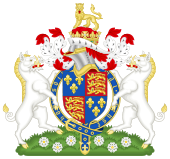 Coat of Arms of King Richard III, the founder of the College.

In addition to designing and granting new arms, the College fields many requests from people attempting to demonstrate descent from an armigerous (arms-bearing) person; a person descended in the male line (or through heraldic heiresses) from such an ancestor may be reissued that ancestor's arms (with differencing marks if necessary to distinguish from senior-line cousins). To that end, the college is involved in genealogy and the many pedigrees (family trees) in their records, although not open to the public, have official status. Anyone may register a pedigree with the college, where they are carefully internally audited and require official proofs before being altered. 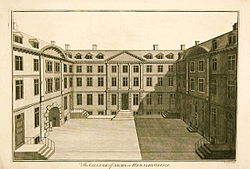 Heralds were originally messengers; and to this day the officers of the College of Arms occasionally step back into that role by publicly reading Royal proclamations, notably at the accession of a new sovereign. They also have a part in planning for and guiding participants through state ceremonies, such as coronations, the introduction of new peers into the House of Lords, and the ceremonies of orders of chivalry. For these public appearances, the officers of the college wear costume representing their place in the Royal Household, either simple red livery or the herald's traditional colourful outfit of a tabard emblazoned with his master's arms (in this case the royal arms). On these occasions they are sometimes preceded by state trumpeters (with whom they should not be confused).

The College of Arms occupies a building on Queen Victoria Street in the City of London, not far to the south of St. Paul's Cathedral. The site was granted to the college when it was re-incorporated by Philip and Mary I in 1555, and the present seventeenth century building dates from after the Great Fire of London in 1666.

On the morning of 5 February 2009, a fire broke out on the top floor of the College building. The fire brigade were called immediately and the building was safely evacuated with no casualties. There was also no damage to any of the records and the building remained open for business whilst repairs took place. 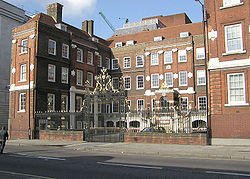 The facade of the College of Arms on Queen Victoria Street, London

The Earl Marshal, a hereditary office held by the Duke of Norfolk, oversees the College, though he is not a member of that body; arms may not be granted without his consent. Furthermore, the Earl Marshal may, in theory, hear cases and controversies relating to the use of arms in the Court of Chivalry, although the court has not sat since 1954. In practice, the Earl Marshal usually leaves affairs to the professional heralds of the College.

There are, historically, three levels of officers of arms: Kings of Arms, Heralds and Pursuivants. The officers of arms occupy posts bearing traditional titles with royal connotations.

The various officers of arms have their own private practices in heraldry and genealogy, and receive only nominal salaries as officers of the College. These salaries were set centuries ago and reflect the living costs of the day. They were fixed at higher levels by James I but reduced by William IV in the 1830s. The salaries of the officers of arms are listed below, which is not taxable income:

Herald of Arms in Ordinary

Pursuivant of Arms in Ordinary

Officers Extraordinary to the college serve on rotation as the "officer in waiting" to handle walk-in business at the college's premises. Beyond these "Heralds in Ordinary", "Heralds Extraordinary" can be appointed to take part in special ceremonial occasions or to assist the Earl Marshal personally; they are not members of the college.

Grants and descent of arms 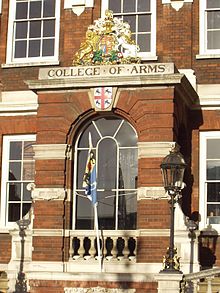 The entrance of the College of Arms building in London. At the top, the Royal Arms can be seen. Below the name is the shield of the College itself. The banner bears the arms of William George Hunt, the officer in waiting on the day the picture was taken.

The Kings of Arms grant coats of arms by letters patent. Before they can even consider the granting of arms, an application must be made to the Earl Marshal, and a fee paid.

The Kings of Arms are authorised in their patents of appointment to grant (with the consent of the Earl Marshal) to "eminent men", a phrase which first appeared in the patent of appointment of Stephen Leake as Clarenceux King of Arms in 1741. Originally, the test applied was one of wealth or social status, because any man entitled to bear a coat of arms was expected to be a gentleman. By 1530, the heralds applied a property qualification, requiring successful candidates for a grant of arms to have an income from land of £10 per annum, or movable wealth of £300. But since the heralds receive fees for granting arms, they have always had an incentive to be generous rather than restrictive in their interpretation of who should be allowed a grant. In 1616, Ralphe Brooke, York Herald, tricked Garter King of Arms, Segar, into granting a coat of arms to the common hangman for a fee of 22 shillings.[2]

In 1673, the authority of the Earl Marshal, which the heralds had challenged, was established in its modern form by a royal declaration which stated, among other things, that no patents of arms should be granted without his consent. This established the system, which is still operated, whereby royal authority to approve candidates for grants of arms is exercised by the Earl Marshal, and royal authority to grant the arms themselves is exercised by the Kings of Arms from the College of Arms. The application to the Earl Marshal (the Duke of Norfolk) is in the form of a petition, called a "Memorial", in the name of the prospective grantee. The wording of the Memorial is important because it is closely followed (for example, as to the description of the grantee of arms by profession, place of residence, etc.) in any subsequent Letters Patent containing the grant of arms.

There are no fixed criteria as to whether a modern application for a grant of arms should be allowed. If a herald is approached and does not consider that the application has merit, he may tactfully suggest to the applicant that he or she should not proceed. If it does proceed, its success or otherwise will depend on the approval of the Earl Marshal, who may apply his own standards. Peter Gwynn-Jones, Garter King of Arms, wrote that "In practice, eligibility depends upon holding a civil or military commission, a sound university degree or professional qualification, or having achieved some measure of distinction in a field beneficial to society as a whole". (Gwynn-Jones, 1998; p 121) 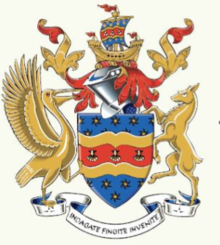 If the Earl Marshal finds the application in the "Memorial" satisfactory, he will grant a Warrant authorising the Kings of Arms to proceed with the designing of arms. One of the heralds then works with the applicant to devise arms pleasing to him as well as heraldically correct. Once a final form is reached, the Kings of Arms grant letters patent (colourfully illuminated and decorated) authorising the use of arms blazoned therein to the grantee and his heirs.

They, or a differenced version of them using marks of cadency, will be inherited by all of the legitimate children of an individual and such children and their descendants may bear the arms (or a differenced version of them) from the moment of birth: they do not (as with other inheritance) have to wait for the death of the previous generation. Nor is there any requirement for the College of Arms to approve the use of the arms in each generation: the original grant of arms is the only authority required. Although daughters and sons inherit the right to bear arms for themselves personally, the right passes only through the male line: hence, a son transmits the arms to his children, but a daughter, while bearing them for herself, does not transmit them to her children. A partial exception to this rule is the case of a woman who has no brothers, or whose brothers have no issue; such a woman is called an heraldic heiress and may transmit the arms to her children as a quartering with their father's arms, and so consequently to their descendants.

The costs involved are quite substantial. The applicant does not buy a coat of arms: the arms themselves are freely given, but fees must be paid to the heralds and artists involved as professionals, and to support the buildings and other running costs of the College. Currently, the cost of an individual personal grant of both arms and crest is £4,225 as of January 2010.[4] Aside from the heralds' traditional nominal salaries, given above, the College of Arms is not financed by the taxpayer.

The College of Arms is also an authorized location for enrolling a change of name. In the common law there is no obligation to undergo any particular formality in order to change one's name. However it is possible to execute a deed poll as a demonstration of intention to adopt and henceforth use a new name, and deeds poll may be enrolled either in the High Court or in the College of Arms. On being enrolled the deed is customarily 'gazetted', that is published in the London Gazette. (The deed poll is not entered on the registers, but is still published, if the name change does not amend the surname.)[5]

Change of name and arms

It is also possible to change ones arms, with or without adopting or appending a new surname, by Royal Licence, that is to say a licence in the form of a warrant from the Crown directed to the kings of arms instructing them to exemplify the transferred arms or a version of them to the licensee in his or her new name. Royal Licences are issued on the advice of Garter King of Arms and are usually dependent on there being some constraining circumstances such as a testamentary injunction or a good reason to wish to perpetuate a particular coat of arms. The Royal Licence is of no effect until and unless the exemplification is issued and recorded in the College of Arms. Royal Licences are gazetted and obviate the need for a deed poll.[6]

The Roll of the Peerage

From November 2010 the College of Arms website is the recognized place of publication for the Roll of the Peerage, the official register created by Royal Warrant of 1 June 2004 for the purposes of recording hereditary and life peers.[7]