Prehistory
For a timeline of events in the early history of the universe and prehistoric Earth, see Timeline of prehistory.

Prehistory (Latin, præ = before, historia = history/story) is the period before recorded history. Prehistory refers to that span of human existence before the availability of those written records with which recorded history begins.[1] Archeologist Paul Tournal originally coined the term anté-historique[2] in describing the finds he had made in the caves of southern France.[3] Thus, the term came into use in France in the 1830s to describe the time before writing, and the word "prehistoric" was later introduced into English by archeologist Daniel Wilson in 1851.[4][5]

The term "prehistory" can refer to all time since the beginning of the universe, but more often refers to the period since life appeared on Earth, or even more specifically to the time since human-like beings appeared.[6][7] In dividing up human prehistory, prehistorians typically use the three age system, whereas scholars of pre-human time periods typically use the well defined Rock record and its internationally defined stratum base within the geologic time scale. The three-age system is the periodization of human prehistory into three consecutive time periods, named for their respective predominant tool-making technologies; the Stone Age, Bronze Age, and Iron Age. Another division of history and prehistory can be made between those written events that can be precisely dated by use of a continuous calendar dating from current and those that can't. The loss of continuity of calender date most often occurs when a civilization falls and the language and calendar fall into disuse. We therefore lose the ability to precisely date events written through primary sources to events dated to current calendar dating.

The occurrence of written materials (and so the beginning of local "historic times") varies generally to cultures classified within either the late Bronze Age or within the Iron Age. Historians increasingly do not restrict themselves to evidence from written records and are coming to rely more upon evidence from the natural and social sciences, thereby blurring the distinction between the terms "history" and "prehistory."[citation needed] This view has recently been articulated by advocates of deep history.

Because, by definition, there are no written records from human prehistory, dating of prehistoric materials is particularly crucial to the enterprise. Clear techniques for dating were not well-developed until the 19th century.[8]

The primary researchers into human prehistory are prehistoric archaeologists and physical anthropologists who use excavation, geologic and geographic surveys, and other scientific analysis to reveal and interpret the nature and behavior of pre-literate and non-literate peoples.[6] Human population geneticists and historical linguists are also providing valuable insight for these questions.[7] Cultural anthropologists help provide context for marriage[clarification needed] and trade, by which objects of human origin pass among people, allowing an analysis of any article that arises in a human prehistoric context.[7] Therefore, data about prehistory is provided by a wide variety of natural and social sciences, such as paleontology, biology, archaeology, palynology, geology, archaeoastronomy, comparative linguistics, anthropology, molecular genetics and many others.

Prehistory is an important part of evolutionary psychology since it is argued that many human characteristics are adaptations to the prehistoric environment and in particular the environment during the long paleolithic period.[9]

Human prehistory differs from history not only in terms of its chronology but in the way it deals with the activities of archaeological cultures rather than named nations or individuals. Restricted to material processes, remains and artifacts rather than written records, prehistory is anonymous. Because of this, reference terms that prehistorians use, such as Neanderthal or Iron Age are modern labels with definitions sometimes subject to debate.

The date marking the end of prehistory in a particular culture or region, that is the date when relevant written historical records become a useful academic resource, varies enormously from region to region. For example, in Egypt it is generally accepted that prehistory ended around 3200 BC, whereas in New Guinea the end of the prehistoric era is set much more recently, at around 1900 AD. In Europe the relatively well-documented classical cultures of Ancient Greece and Ancient Rome had neighbouring cultures, including the Celts and to a lesser extent the Etruscans, with little or no writing, and historians must decide how much weight to give to the often highly prejudiced accounts of the "prehistoric" cultures in Greek and Roman literature. 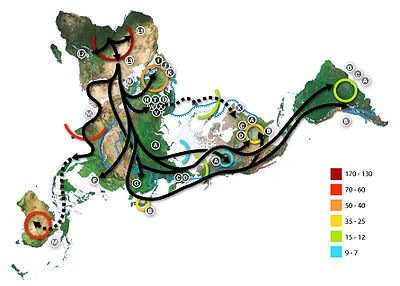 Map of early human migrations, according to mitochondrial population genetics. Numbers are millennia before the present (accuracy disputed).

"Paleolithic" means "Old Stone Age," and begins with the first use of stone tools. The Paleolithic is the earliest period of the Stone Age.

Throughout the Paleolithic, humans generally lived as nomadic hunter-gatherers. Hunter-gatherer societies tended to be very small and egalitarian[citation needed], though hunter-gatherer societies with abundant resources or advanced food-storage techniques sometimes developed sedentary lifestyles with complex social structures such as chiefdoms, and social stratification. Long-distance contacts may have been established, as in the case of Indigenous Australian "highways." 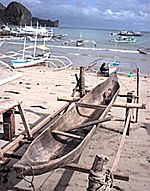 The "Mesolithic," or "Middle Stone Age" (from the Greek "mesos," "middle," and "lithos," "stone") was the period in the development of human technology between the Paleolithic and Neolithic periods of the Stone Age.

The Mesolithic period began at the end of the Pleistocene epoch, some 10,000 BP, and ended with the introduction of agriculture, the date of which varied by geographic region. In some areas, such as the Near East, agriculture was already underway by the end of the Pleistocene, and there the Mesolithic is short and poorly defined. In areas with limited glacial impact, the term "Epipaleolithic" is sometimes preferred.

Regions that experienced greater environmental effects as the last ice age ended have a much more evident Mesolithic era, lasting millennia. In Northern Europe, societies were able to live well on rich food supplies from the marshlands fostered by the warmer climate. Such conditions produced distinctive human behaviours that are preserved in the material record, such as the Maglemosian and Azilian cultures. These conditions also delayed the coming of the Neolithic until as late as 4000 BC (6,000 BP) in northern Europe.

Remains from this period are few and far between, often limited to middens. In forested areas, the first signs of deforestation have been found, although this would only begin in earnest during the Neolithic, when more space was needed for agriculture.

The Mesolithic is characterized in most areas by small composite flint tools — microliths and microburins. Fishing tackle, stone adzes and wooden objects, e.g. canoes and bows, have been found at some sites. These technologies first occur in Africa, associated with the Azilian cultures, before spreading to Europe through the Ibero-Maurusian culture of Northern Africa and the Kebaran culture of the Levant. Independent discovery is not always ruled out.

Although Mesolithic culture is normally associated with Homo sapiens, there were other groups of humans alive at the same time, such as Neanderthals, and it is not sure that all mesolithic remains belong to Homo Sapiens.[citation needed]

"Neolithic" means "New Stone Age." This was a period of primitive technological and social development, toward the end of the "Stone Age." The Neolithic period saw the development of early villages, agriculture, animal domestication, tools and the onset of the earliest recorded incidents of warfare.[11] The Neolithic term is commonly used in the Old World, as its application to cultures in the Americas and Oceania that did not fully develop metal-working technology raises problems.

A major change, described by prehistorian Vere Gordon Childe as the "Agricultural Revolution," occurred about the 10th millennium BC with the adoption of agriculture. The Sumerians first began farming c. 9500 BC. By 7000 BC, agriculture had been developed in India and Peru separately; by 6000 BC, to Egypt; by 5000 BC, to China. About 2700 BC, agriculture had come to Mesoamerica.

Although attention has tended to concentrate on the Middle East's Fertile Crescent, archaeology in the Americas, East Asia and Southeast Asia indicates that agricultural systems, using different crops and animals, may in some cases have developed there nearly as early. The development of organised irrigation, and the use of a specialised workforce, by the Sumerians, began about 5500 BC. Stone was supplanted by bronze and iron in implements of agriculture and warfare. Agricultural settlements had until then been almost completely dependent on stone tools. In Eurasia, copper and bronze tools, decorations and weapons began to be commonplace about 3000 BC. After bronze, the Eastern Mediterranean region, Middle East and China saw the introduction of iron tools and weapons.

The Americas may not have had metal tools until the Chavín horizon (900 BC). The Moche did have metal armor, knives and tableware. Even the metal-poor Inca had metal-tipped plows, at least after the conquest of Chimor. However, little archaeological research has so far been done in Peru, and nearly all the khipus (recording devices, in the form of knots, used by the Incas) were burned in the Spanish conquest of Peru. As late as 2004, entire cities were still being unearthed.

The cradles of early civilizations were river valleys, such as the Euphrates and Tigris valleys in Mesopotamia, the Nile valley in Egypt, the Indus valley in the Indian subcontinent, and the Yangtze and Yellow River valleys in China. Some nomadic peoples, such as the Indigenous Australians and the Bushmen of southern Africa, did not practice agriculture until relatively recent times.

Agriculture made possible complex societies — civilizations. States and markets emerged. Technologies enhanced people's ability to harness nature and to develop transport and communication."The city represented a new degree of human concentration, a new magnitude in settlement". [12]. Cities relied on agricultural surplus."since the inhabitants of a city do not produce their own food...cities cannot support themselves...thus exist only where agriculture is successful enough to produce agricultural surplus." [13]

In Old World archaeology, the "Chalcolithic", "Eneolithic" or "Copper Age" refers to a transitional period where early copper metallurgy appeared alongside the widespread use of stone tools.

The term Bronze Age refers to a period in human cultural development when the most advanced metalworking (at least in systematic and widespread use) included techniques for smelting copper and tin from naturally occurring outcroppings of ores, and then combining them to cast bronze. These naturally occurring ores typically included arsenic as a common impurity. Copper/tin ores are rare, as reflected in the fact that there were no tin bronzes in Western Asia before 3000 BC. The Bronze Age forms part of the three-age system for prehistoric societies. In this system, it follows the Neolithic in some areas of the world.

The Bronze Age is the earliest period for which we have direct written accounts, since the invention of writing coincides with its early beginnings.[citation needed]

In archaeology, the Iron Age refers to the advent of ferrous metallurgy. The adoption of iron coincided with other changes in some past cultures, often including more sophisticated agricultural practices, religious beliefs and artistic styles, which makes the archaeological Iron Age coincide with the "Axial Age" in the history of philosophy.

All dates are approximate and conjectural, obtained through research in the fields of anthropology, archaeology, genetics, geology, or linguistics. They are all subject to revision due to new discoveries or improved calculations. BP stands for "Before Present."