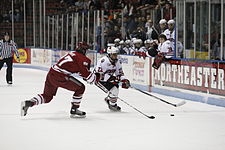 The Northeastern Huskies, a Hockey East member team, take on the UMass Minutemen at Matthews Arena in Boston, Massachusetts

College hockey refers to ice hockey played between colleges with their teams composed of enrolled students. College hockey is played in Canada and the United States, though leagues outside of North America exist.

In the United States, college hockey refers to ice hockey played between colleges and universities with the competitive governance structure established by the National Collegiate Athletic Association (NCAA).

In the NCAA, two of the three membership divisions, Division I and Division III, hold national championships, and the hockey teams of schools that are generally Division II members compete in either D-I (in the majority of such instances) or D-III.

A map of all NCAA Division I men's hockey teams.

A map of all NCAA Division I women's hockey teams.

One Division I non-hockey conference, the Ivy League, crowns hockey champions for both men and women. Six of the eight Ivies sponsor intercollegiate hockey programs for both sexes, and all are members of ECAC Hockey. The Ivy League uses the results of its members in ECAC play to determine Ivy champions. The Big Ten plans to add a men's hockey championship in 2013-14.

The Frozen Four is the trademarked name of the final two rounds of the NCAA Division I championship of ice hockey in the USA. Schools advance in a single-elimination tournament from four regional sites to a single site, where the national semifinals and final game are played. The NCAA started a Women's Frozen Four beginning in the 2000-01 season.

Prior to the NCAA establishing a women's ice hockey championship, the AWCHA held a championship from 1997-98 season to 1999-2000 season. Below are those champions.

Men's U.S. college hockey has proven to be a significant feeder system to the National Hockey League. In 2010-11, 30 percent of NHL players (a total of 294) had U.S. college hockey experience prior to turning professional. That number represented an increase of 35% from 10 years ago.[4] Among the top former U.S. college players in the NHL are Martin St. Louis, Ryan Miller, Jonathan Toews and Tim Thomas.

The Hobey Baker Memorial Award, first presented in 1981, honors the top player in Men’s Division I hockey. It is named for Hobey Baker, regarded as the first true star of American hockey. A 1914 graduate of Princeton, Baker went on to serve in World War I. He died in December 1918, shortly after the war ended, when the plane he was flying crashed hours before he was scheduled to return to the U.S. Finalists are chosen based on strength of character both on and off the ice, contributions to the integrity of the team, outstanding skills in all phases of the game, and scholastic achievement and sportsmanship, with the winner being announced annually during the off-day between the semifinal and championship rounds at the Frozen Four.

The Patty Kazmaier Memorial Award is named after Patty Kazmaier, a standout defenseman from Princeton from 1981 to 1986 who lost her life following a battle with a rare blood disease. First awarded in 1998, the Kazmaier award is given annually by USA Hockey to the top player in Women’s Division I program. As with the Hobey Baker Award, the Kazmaier Award is presented on the off-day between the semifinal and championship games at the Women’s Frozen Four. Nomination criteria include “Outstanding individual and team skills, sportsmanship, performance in the clutch, personal character, competitiveness and a love of hockey. Consideration will also be given to academic achievement and civic involvement.”[5]

U.S. college hockey players must be deemed eligible for NCAA competition by the NCAA Eligiblity Center, a process that examines a student-athlete's academic qualifications and amateur status. Players who have participated in the Canadian Hockey League or any other professional hockey league are considered ineligible for NCAA Division I hockey.

University hockey teams in Canada compete in leagues as part of Canadian Interuniversity Sport (CIS), the national governing body for Canadian collegiate athletics. The CIS sponsors both men's and women's hockey. Like in the United States, teams compete in athletic conferences/leagues based on geographical locations of the schools. Unlike the NCAA the CIS does not award players with athletic scholarships, resulting in a lack of divisional separation such as found between NCAA divisions. Individual conferences hold postseason tournaments, followed by the round-robin CIS Championship tournament in late March.[6]

The American Collegiate Hockey Association (ACHA) is the sanctioning body for non-NCAA club ice hockey in the United States. The organization provides structure, regulations and promotes the quality of collegiate ice hockey. Teams separated into three men's and two women's divisions with over 300 teams from across the United States. The majority of the ACHA schools don't offer NCAA hockey, there are some schools that offer both a club team in the ACHA and a varsity team in the NCAA. ACHA teams attract considerable on-campus attention and the quality of play is considered quite high, especially in the top division.[7]

Strict NCAA requirements, large operating budgets, and Title IX issues are major reasons why many universities opt to field teams in the ACHA instead of the NCAA.[8]

The National Association of Intercollegiate Hockey (NAIH) was established in 2011 as an alternative to the ACHA.[9] The organization is made up of 11 non-ACHA and non-NCAA ice hockey teams located in the Northeastern United States. After the initial 11-team 2011-12 season, the NAIA hopes to expand in the United States and Canada.[9]

The National Junior College Athletic Association (NJCAA) sponsors men's ice hockey at the NJCAA division I level. 9 schools play hockey as members of the NJCAA, many also play against and are members of the ACHA.

Outdoor games in the 21st century 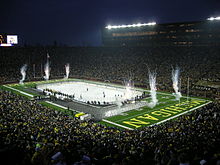 A record 104,173 fans watch Michigan vs Michigan State at The Big Chill at the Big House

A rivalry between the United States Military Academy (Army) Black Knights and the Royal Military College of Canada (RMC) Paladins resulted in an annual West Point Weekend hockey game.[11] The series was first played in 1923, and was claimed to be the longest-running annual international sporting event in the world.[12] Army and RMC played continuously from 1949 until 2007, when scheduling conflicts forced the academies to abandon the scheduled game.[13] The series will resume in 2011-12 and continue for the next two seasons at least.[14]