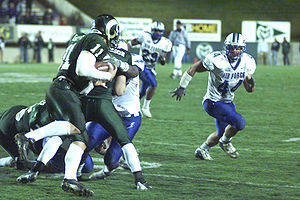 A college football game between Colorado State and Air Force 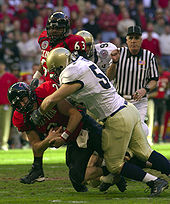 A college football game between Texas Tech and Navy

Rugby in England and Canada

Modern North American football has its origins in various games, all known as "football", played at public schools in England in the mid-19th century. By the 1840s, students at Rugby School were playing a game in which players were able to pick up the ball and run with it, a sport later known as Rugby football. The game was taken to Canada by British soldiers stationed there and was soon being played at Canadian colleges.

The first documented gridiron football match was a game played at University College, a college of the University of Toronto, November 9, 1861. One of the participants in the game involving University of Toronto students was (Sir) William Mulock, later Chancellor of the school. A football club was formed at the university soon afterward, although its rules of play at this stage are unclear.

In 1864, at Trinity College, also a college of the University of Toronto, F. Barlow Cumberland and Frederick A. Bethune devised rules based on rugby football. Modern Canadian football is widely regarded as having originated with a game played in Montreal, in 1865, when British Army officers played local civilians. The game gradually gained a following, and the Montreal Football Club was formed in 1868, the first recorded non-university football club in Canada.

The first college football game in the United States

The first game of intercollegiate "football" between two colleges from the United States was an unfamiliar ancestor of today's college football, as it was played under 99-year-old soccer-style Association rules.[1] The game was played between teams from Rutgers University and Princeton University, which was called the College of New Jersey at the time. It took place on November 6, 1869 at College Field, which is now the site of the College Avenue Gymnasium at Rutgers University in New Brunswick, New Jersey. Rutgers won by a score of 6 "runs" to Princeton's 4.[2][3][4] The 1869 game between Rutgers and Princeton is important in that it is the first documented game of intercollegiate football ever played between two American colleges, and because of this, Rutgers is often referred to as The Birthplace of College Football. It came two years before an inter-club rugby game under the auspices of the Rugby Football Union would be played in England; though it must be remembered that rugby had been codified 24 years before this in 1845 and played by many schools, universities and clubs even before the laws were first put on paper. Although the Rutgers-Princeton game was undoubtedly different from what we today know as American football, it was the forerunner of what evolved into American football. Another similar game took place between Rutgers and Columbia University in 1870. The popularity of intercollegiate competition in football would spread throughout the country.

The Rutgers College football team in 1882.

Rugby is adopted by US colleges

Yale, together with Rutgers, Princeton and Columbia met on October 20, 1873 at the Fifth Avenue Hotel in New York City to agree a set of rules and regulations that would allow them play a form of football that was essentially Association football (today often called "soccer" in the US) in character. Harvard University turned down an invitation to join this group because they preferred to play a rougher version of football called "the Boston Game" in which the kicking of a round ball was the most prominent feature though a player could run with the ball, pass it, or dribble it (known as “babying”). The man with the ball could be tackled, although hitting, tripping, “hacking” (shin-kicking) and other unnecessary roughness was prohibited. There was no limit to the number of players, but there were typically ten to fifteen a-side.

Harvard's decision not to join the Yale-Rutgers-Princeton-Columbia association meant that they needed to look further afield to find football opponents so when a challenge from Canada’s McGill University rugby team in Montreal was issued to Harvard, they accepted. It was agreed that two games would be played on Harvard’s Jarvis baseball field in Cambridge, Massachusetts on May 14 and 15, 1874: one to be played under Harvard rules, another under the stricter rugby regulations of McGill. Harvard beat McGill in the "Boston Game" on the Thursday and held McGill to a 0-0 tie on the Friday. The Harvard students took to the rugby rules and adopted them as their own[5], travelling to Montreal to play a further game of rugby in the Fall of the same year winning by three tries to nil.

Harvard then played Tufts University on June 4, 1875, again at Jarvis Field. Jarvis Field was at the time a patch of land at the northern point of the Harvard campus, bordered by Everett and Jarvis Streets to the north and south, and Oxford Street and Massachusetts Avenue to the east and west. The game was won by Tufts 1-0[6] and a report of the outcome of this game appeared in the Boston Daily Globe of June 5, 1875. In this game each side fielded eleven men, participants were allowed to pick up the inflated egg-shaped ball and run with it and the ball carrier was stopped by knocking him down or "tackling" him. A photograph of the 1875 Tufts team hangs in the College Football Hall of Fame in South Bend, Indiana commemorates this match as the generally accepted first intercollegiate football game between two US institutions.

In 1876 at Massasoit House in Springfield, Massachusetts, Harvard persuaded Princeton and Columbia to adopt an amalgam of rugby's laws and the rules that they were then playing, thus forming the Intercollegiate Football Association (IFA). Yale initially refused to join this association because of a disagreement over the number of players to be allowed per team (relenting in 1879) and Rutgers were not invited to the meeting. The rules that they agreed upon were essentially those of rugby union at the time with the exception that points be awarded for scoring a try, not just the conversion afterwards (extra point). Incidentally, rugby was to make a similar change to its scoring system 10 years later. 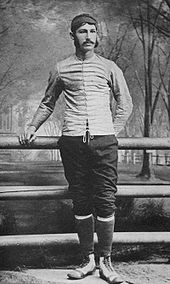 Walter Camp, the "Father of American Football", pictured here in 1878 as the captain of the Yale Football team

Walter Camp, known as the "Father of American Football", is credited with changing the game from rugby into a unique and different sport. Camp is responsible for pioneering the play from scrimmage (earlier games featured a rugby scrum), most of the modern elements of scoring, the eleven-man team, and the traditional offensive setup of the seven-man line and the four-man backfield. Camp also had a hand in popularizing the game. He published numerous articles in publications such as Collier's Weekly and Harper's Weekly, and he chose the first College Football All-America Team. 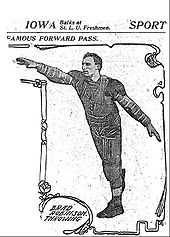 Formation of the NCAA

College football increased in popularity through the remainder of the 19th century. It also became increasingly violent. In 1905, President Theodore Roosevelt threatened to ban the sport following a series of player deaths from injuries suffered during games. The response to this was the formation of what became the National Collegiate Athletic Association (NCAA), which set rules governing the sport. The rules committee considered widening the playing field to "open up" the game, but Harvard Stadium (the first large permanent football stadium) had recently been built at great expense; it would be rendered useless by a wider field. The rules committee legalized the forward pass instead. The first legal pass was thrown by Bradbury Robinson on September 5, 1906, playing for coach Eddie Cochems, who developed an early but sophisticated passing offense at Saint Louis University. Another rule change banned "mass momentum" plays (many of which, like the infamous "flying wedge", were sometimes literally deadly).

Even after the emergence of the professional National Football League (NFL), college football remained extremely popular throughout the U.S.[7] Although the college game has a much larger margin for talent than its pro counterpart, the sheer number of fans following major colleges provides a financial equalizer for the game, with Division I programs – the highest level – playing in huge stadiums, six of which have seating capacity exceeding 100,000. In many cases, college stadiums employ bench-style seating, as opposed to individual seats with backs and arm rests. This allows them to seat more fans in a given amount of space than the typical professional stadium, which tends to have more features and comforts for fans. (Only one stadium owned by a U.S. college or university—Papa John's Cardinal Stadium at the University of Louisville—consists entirely of chairback seating.)

College athletes, unlike professionals, are not permitted by the NCAA to be paid salaries, though many do receive athletic scholarships and financial assistance from their university.

A night game between Harvard and Brown, September 25, 2009

Although rules for the high school, college, and NFL games are generally consistent, there are several minor differences. The NCAA Football Rules Committee determines the playing rules for Division I (both Bowl and Championship Subdivisions), II, and III games (the National Association of Intercollegiate Athletics (NAIA) is a separate organization, but uses the NCAA rules). 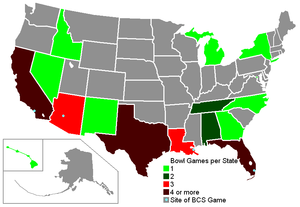 Number of bowl games per state for the 2010-2011 season.
Main article: Bowl game

Unlike most other sports—collegiate or professional—the Football Bowl Subdivision, formerly known as Division I-A college football, does not employ a playoff system to determine a champion. Instead, it has a series of "bowl games." The annual national champion is determined by a vote of sports writers and other non-players. This system has been challenged often, beginning with an NCAA committee proposal in 1979 to have a four-team playoff following the bowl games.[12] However, little headway has been made, given the entrenched vested economic interests in the various bowls.

A bowl game is a post-season college football game, typically in the Division I Bowl Subdivision. The first bowl game was the 1902 Rose Bowl, played between Michigan and Stanford; Michigan won 49-0. It ended when Stanford requested and Michigan agreed to end it with 8 minutes on the clock. That game was so lopsided that the game was not played annually until 1916, when the Tournament of Roses decided to reattempt the postseason game. The term "bowl" originates from the shape of the Rose Bowl stadium in Pasadena, California, which was built in 1923 and looked like a bowl. This is where the name came in to use, as it became known as the Rose Bowl Game. Other games came along and used the term "bowl", whether the stadium was shaped like a bowl or not.

At the Division I FBS level, teams must earn the right to be bowl eligible by winning at least 6 games during the season (teams that play 13 games in a season, which is allowed for Hawaiʻi and any of its home opponents, must win 7 games). They are then invited to a bowl game based on their conference ranking and the tie-ins that the conference has to each bowl game. For the 2009 season, there were 34 bowl games, so 68 of the 120 Division I FBS teams were invited to play at a bowl. These games are played from mid-December to early January and most of the later bowl games are typically considered more prestigious.

After the Bowl Championship Series, additional all-star bowl games round out the post-season schedule through the beginning of February.

Listen to this article (info/dl)

This audio file was created from a revision of College football dated 2006-05-29, and does not reflect subsequent edits to the article. (Audio help)
More spoken articles