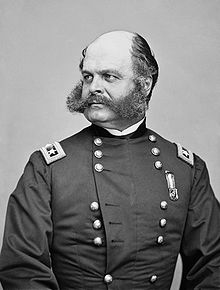 Sideburns or sideboards[1] are patches of facial hair grown on the sides of the face, extending from the hairline to below the ears and worn with an unbearded chin. The term sideburns is a 19th-century corruption of the original burnsides, named after American Civil War general Ambrose Burnside,[2] a man known for his unusual facial hairstyle that connected thick sideburns by way of a moustache, but left the chin clean-shaven.

Sideburns can be worn and grown in combination with other styles of facial hair, such as the moustache or goatee, but once they extend from ear to ear via the chin they cease to be sideburns and become a beard, chinstrap beard, or chin curtain.

Indigenous men of Mexico, who shaved their heads and wore their sideburns long, as well as Colombians, who wear their sideburns long and typically do not have any other facial hair, are said to be wearing "balcarrotas", rarely seen in modern times, but prized in the sixteenth century, as a mark of virile vanity and banned by the colonial authorities in New Spain, occasioning rioting in 1692.[3] 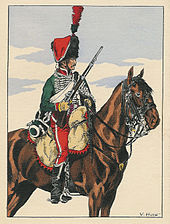 Mid-ear sideburns and mustache on a French hussar, 1804

In ancient history, Alexander the Great is depicted with sideburns in a mosaic from Pompeii.

Following the eighteenth century, when European men west of Poland were universally clean-shaven, sideburns, like beards, began to grow in popularity during the Napoleonic period, as first among military men (illustration, left); the trend eventually made its way to Meiji Japan, in the first wave of Western fashion there. The return of facial hair in Western Europe began as a military fashion, at first inspired by the heroic sideburns sported by hussar regiments.

Nineteenth century sideburns were often far more extravagant than those seen today, similar to what are now called mutton chops. As with beards, sideburns went quickly out of fashion in the early twentieth century, and in the First World War in order to secure a seal on a gas mask, men had to be clean-shaven; this did not affect mustaches.[4]

In 1936 President Roosevelt's brief experiment with sideburns, grown on a yachting cruise, provoked only laughter.[5] Sideburns made a comeback in the mid-1950s, when James Dean's sideburns identified him as a Rebel Without a Cause (1955). Spurred by Elvis Presley, sideburns were sported by "hoods", "greasers", and "rockers" as an emblem of rebellious post-pubescent manliness by young men who scorned to be "Ivy League".[6] Sideburns gained new connotations in 1960s hippie subculture: the struggle of a New Jersey youth to wear sideburns to his public high school graduation made a newspaper article in 1967[7] and in the late 1960s and early 1970s among youth subcultures such as hippies and skinheads (although skinheads often favor mutton chops). Sideburns also became a symbol of the gay club scenes of San Francisco and Sydney, primarily Lambchops. Because of their multifarious history, sideburns may be seen as stuffily Victorian and ultra-conservative, a sign of rebelliousness, or merely an artifact of current fashion.