The North American AJ Savage (later A-2 Savage) was a carrier-based bomber aircraft built for the United States Navy by North American Aviation. The original contract was awarded in June 1946, first flight 3 July 1948, and the plane entered service in 1949.[1]

At the end of World War II, the US Navy felt the need to acquire a nuclear strike capability to maintain its political influence. In the short term, carrier-based aircraft were the ideal solution. Nuclear munitions at that time were bulky and required a large aircraft to carry them. The Navy improvised a carrier-based nuclear strike plane by modifying the Lockheed P2V Neptune twin-prop ocean patrol aircraft for carrier takeoff using jet assisted takeoff (JATO) rocket boosters, with initial takeoff tests in 1948. But the Neptune couldn't land on a carrier, so the crew either had to make their way to a friendly land base after a strike, or ditch in the sea near a US Navy vessel.

The AJ Savage was a large composite-powered carrier-borne Attack Bomber designed to deliver nuclear ordnance. It also performed photo reconnaissance duties and later on was used as an aerial refueling platform. The North American AJ-1/2 and AJ-1/2P Savage aircraft were in a number of USN Heavy Attack Composite squadrons from 1948–1956, as well as in several Photographic Reconnaissance squadrons. The Heavy Attack versions were the first nuclear bomb carrying bombers able to be launched from and recovered on aircraft carriers.

The date of its design inception was a time where the US Navy was faced with procuring the nascent jet engine, while still having to rely upon the simple yet well proven reciprocating engine. Jets at this time were unreliable and used large quantities of fuel; however, once they were developed, they produced performance that no piston engine could ever provide. A compromise was made to include in the Savage two Pratt & Whitney R-2800 piston engines, with a large turbocharger fitted inside each engine nacelle. This combination made it possible for the R-2800 engines to produce rated power (2,500 hp/1,864 kW) up to 42,000 ft (12,802 m) altitude. An Allison J33 turbojet was fitted in the rear fuselage. Interestingly, both engine types used the same fuel. The piston-turbojet arrangement was intended to give added power on take-off and extra dash speed while in combat. At high altitude, this "boxy" looking (but aerodynamically very clean) airplane was remarkably fast, reaching more than 460 mph (740 km/h), when the jets of that era were not very much faster.

The first production Savage flew in May 1949, with the first carrier landing of the type taking place on the USS Coral Sea on 31 August 1950.

Early model Savages (AJ-1) were converted to the air tanker role, with the bomb bay filled with all the necessary equipment, including hoses, fuel pumps, electric power drive, and the drogue. Additional fuel was provided in drop tanks. AJ-1 tankers were used to refuel John Glenn's F8U Crusader during the Project Bullet transcontinental speed record flight.[2]

The AJ-2 first flew on 19 February 1953 and had uprated engines and a taller vertical stabilizer and non-dihedral tailplane.

The AJ-2P was the photographic reconnaissance version of the Savage. It carried photo-flash bombs for night missions, with most of the plane's 18 cameras being operated automatically. It was capable of night and low-level reconnaissance. The -2P also had additional fuel capacity.

The Savage didn't remain in frontline service long because it was seen as an interim solution from the day it performed its first flight, the Navy having already put the wheels in motion for a much better successor. 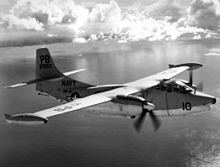 An AJ-2P reconnaissance plane of VAP-61.

A-2B Savage, BuNo 130418, is displayed at the National Museum of Naval Aviation at Naval Air Station Pensacola in Pensacola, Florida.[3] Of 143 examples built, it is the only surviving airframe.