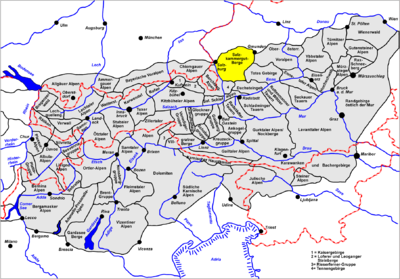 The Salzkammergut Mountains (German: Salzkammergut-Berge) are a group of mountains between Salzburgerland and Oberösterreich in Austria.

To the west lie the Berchtesgaden Alps. They are close to Salzburg.

To the north the Alpine Foreland is the boundary of the Salzkammergut Mountains, between the points where the rivers Salzach and Traun spill out into the Foreland near Salzburg and the Gmunden respectively. To the east the boundary is formed by the Traun between the lakes of Traunsee and, further downstream, the Hallstätter See. To the south the border runs from the Hallstätter See along the stream of the Gosaubach to Gosau and the Gschütt Pass. From there it runs along the Rußbach downstream to the River Lammer and its confluence with the Salzach near Golling. To the west the boundary runs along the River Salzach from where it is joined by the Lammer to the city of Salzburg.