Olave became Chief Guide for Britain in 1918. Later the same year she was presented with a gold Silver Fish, one of only two ever made. She was elected World Chief Guide in 1930. As well as making a major contribution to the development of the Guide / Girl Scout movements, she visited 111 countries during her life attending Jamborees and national Guide and Scout associations.

Olave Soames was the third and youngest daughter of brewery owner and artist Harold Soames (who was himself descended paternally from a landed gentry family, and maternally from a self-made man, Joseph Gilstrap Gelthorpe, who had been Mayor of Newark, Nottinghamshire).

She was educated by her father, her mother Katharine (née Hill), and a number of governesses at home. She lived in seventeen homes in the first 23 years of her life. Olave became keen on outdoor sports including tennis, swimming, football, skating and canoeing, and also played the violin.[1] 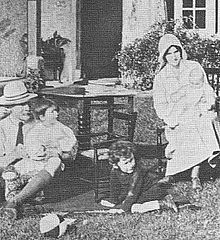 Baden-Powell with her husband and their three children in 1917.

In January 1912, Olave met Second Boer War hero and founder of the Scouts, Robert Baden-Powell on an ocean liner (RMSP Arcadian) on the way to New York to start one of his Scouting World Tours. She was 23, he 55, and they shared the same birthday. They became engaged in September of the same year, causing a media sensation. They married in secret on 30 October 1912 for privacy. "Baden-Powell: Two lives of Hero" by William Hillcourt, Heineman, 1964, p. 335.

The Scouts and Guides of England each donated a penny to buy the Baden-Powells a wedding gift of a car. (Note that this is not the Rolls-Royce they were presented with in 1929). Olave's father assisted financially with the purchase of Pax Hill near Bentley, Hampshire as a family home where she lived with her husband from 29 January 1919 until 25 October 1938. "Baden-Powell: Two lives of Hero" by William Hillcourt, Heineman, 1964, p. 356 & 412.

The Baden-Powells had three children — one son and two daughters (who took the courtesy titles of Honourable in 1929; the son later succeeding his father in 1941):

During 1915 and 1916, with World War I in progress, Olave assisted directly with the war effort in France. Robert had seen the usefulness of the YMCA's recreational huts for the soldiers and persuaded the Mercers' Company (of which he had been Master in 1912) to pay for such a hut at Val-de-Lievres, Calais.[2] It was to be staffed by adults connected with Scouting.[2] Olave was one of the team of five men and three women that staffed the hut at the start.[2] She persuaded her mother to look after the children for time she would be away.[2]

Olave left for France on 7 October 1915.[2] Her regular work in the Mercers' hut included serving cocoa and cigarettes and chatting to those who came in.[2] She also recalled in her autobiography playing her violin and singing at the Christmas Concert.[2] Olave also adopted a number of stray animals during her time in Val-de-Lievres.[2]

During this time, Robert had organised the Scouts to sponsor another recreational hut.[2] Olave and two others started this hut at Etaples after Christmas 1915.[2] At the end of January, Olave was ordered home due to sickness, ending her three months in France.[2]

Olave and Robert moved into Ewhurst Place, outside Robertsbridge in Sussex in April 1913.[3] In June of that year, the 1st Ewhurst Scout Troop was inaugurated.[3] Olave was the warranted Scoutmaster of this troop, assisted by the family's housemaid and the gardener.[3] Olave accompanied Robert on many of his Scouting tours and to events. She also typed letters for him.[2] In 1915, the Baden-Powell's bought a small car, and after Robert taught her to drive, Olave often drove him to engagements.[2]

Although most famously connected with the Girl Guides, Olave's first offer to help them in 1914 was turned down.[4] After the reorganisation of the Girl Guides in 1915, she offered again to help, this time successfully and started organising Guiding in Sussex.[4] She became the County Commissioner for Sussex in March 1916.[4] In October 1916, the first conference for County Commissioners was held and it was here that the Commissioners unanimously requested that Olave take the role of Chief Commissioner.[4][5] During this period she organised a great number of women in other parts of Britain to take up roles in Guiding.[4][5] In 1918, Olave was acclaimed Chief Guide, a title she much preferred to Chief Commissioner.[5] At the Swanwick conference for Commissioners in October 1918, she was presented with a gold version of the Silver Fish, sometimes referred to as a Gold Fish.[5]

In 1932, she was awarded the Dame Grand Cross of The Most Excellent Order of the British Empire (GBE) by King George V, in recognition of her volunteer work

Olave Baden-Powell was presented with a personal standard by the UK Girl Guide's County Commissioners.[5] It was designed by Mrs Zigomala.[5] Miss Kay-Shuttleworth supervised the making of the standard.[5]

The Standard of Lady Baden-Powell, Chief Guide of the World, is blue (azure) from the hoist to the fly. Nearest the hoist is the gold (or) trefoil; then come two small hemispheres, showing a coloured map of the world, indicating her post as Chief Guide. These are placed high to the left of the main fly, which is divided throughout its length by two silver (argent) waves, amongst which are shown three ships with black hulls and white sails, four dolphins and the Gold Fish of the Chief Guide. Then between two red (gules) motto bands on which are embroidered the Baden-Powell and Girl Guide mottoes in gold letters, there is a section alluding to the outdoor life, showing white tents on a green (vert) field. In the extreme fly the Baden-Powell crests are embroidered.[5]

In 1942 she braved U-boat attacks to return to a grace and favour apartment in Hampton Court Palace (in which she lived from 1943 to 1976), since her own home, Pax Hill, had been taken over by the Canadian military. Through World War II she toured the United Kingdom. Fortunately she was on a visit when a V2 missile damaged her apartment in 1944. As soon as she could after D-Day, she went to France, toured throughout Europe as the war ended to help revive Guiding and Scouting. 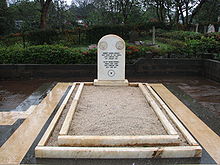 Having suffered a heart attack in Australia in 1961, she was finally banned from travelling by her doctor at the age of 80 in 1970 when she was diagnosed with diabetes from which she eventually died.

In 1968 the Boy Scouts of America (BSA) had given Olave a credit card to defray her travel costs.[6] When she stopped travelling, the BSA asked her to use the card for 'keeping in touch'.[6] This included paying for the over 2000 Christmas cards she sent to those personally known to her.[6]

Olave died on 25 June 1977 at Birtley House, Bramley in Surrey, UK.[7] Her ashes were taken to Kenya to be buried in the same grave as her husband's remains. She was survived by her two daughters, her son having predeceased her.

The Olave Centre for Guides was built in north London in Olave's memory. This has the World Bureau and Pax Lodge in its grounds. Pax Lodge is one of WAGGGS' four World Centres.

Scouts and Guides mark February 22 as B.-P. Day or Thinking Day, the joint birthdays of Robert and Olave Baden-Powell, to remember and celebrate the work of the Chief Scout and Chief Guide of the World. On that day in 2011, a Blue Plaque is to be unveiled near the site of the house in Chesterfield where she lived, by Derbyshire County Council following an Internet poll in which she received 18,026 votes out of 25,080 (72%), cf. 1,231 (5%) for George Stephenson (runner-up).[8]

The Olave Baden-Powell Bursary Fund was set up in 1979 from voluntary contributions in memory of Olave B-P. Annually awarded bursaries aim to allow girls in Girlguiding UK to further their interests and hobbies and realise their dreams.

As a child, Olave learned the violin; her first violin she called Diana. It was a copy of a Stradivarius made by Messrs. Hill for the Paris Exhibition and many years later it was presented to the Guide Association. It is still available on loan to Guides who are seriously learning to play the violin prior to them acquiring their own instrument. See "The Derbyshire Childhood..."