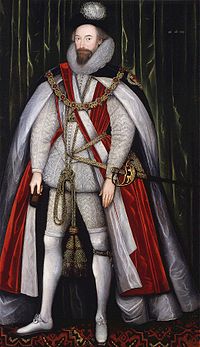 Earl of Suffolk is a title that has been created four times in the Peerage of England. The first creation, in tandem with the creation of the title of Earl of Norfolk, came before 1069 in favour of Ralph the Staller; but the title was forfeited by his heir, Ralph de Guader, in 1074. The second creation came in 1337 in favour of Robert de Ufford; the title became extinct on the death of his son, the second Earl, in 1382. The third creation came in 1385 in favour of Michael de la Pole. For more information on this creation, see the Duke of Suffolk (1448 creation). The fourth creation came in 1603. Lord Thomas Howard was the second son of Thomas Howard, 4th Duke of Norfolk, by his second marriage to Margaret, daughter and heiress of the Thomas Audley, 1st Baron Audley of Walden. Howard was a prominent naval commander and politician and served as Earl Marshal, as Lord Chamberlain of the Household and as Lord High Treasurer. In 1597 he was summoned to Parliament in right of his mother as Baron Howard de Walden, and in 1603 he was further honoured when he was created Earl of Suffolk. His second son the Hon. Thomas Howard was created Earl of Berkshire in 1626.

Lord Suffolk was succeeded by his eldest son, the second Earl. He had already in 1610 been summoned to the House of Lords through a writ of acceleration in his father's junior title of Baron Howard de Walden. He later served as Captain of the Honourable Band of Gentlemen Pensioners and as Lord Warden of the Cinque Ports. On his death the titles passed to his eldest son, the third Earl. He was Lord-Lieutenant of Suffolk and Cambridgeshire. Lord Suffolk had no sons and on his death in 1689 the barony of Howard de Walden fell into abeyance between his daughters (see the Baron Howard de Walden for later history of this title). He was succeeded in the earldom by his younger brother, the fourth Earl. He was childless and on his death the title passed to his younger brother, the fifth Earl. He was succeeded by his son, the sixth Earl. He was a politician and served as First Lord of Trade. In 1706, three years before he succeeded his father, he was raised to the Peerage of England in his own right as Baron Chesterford, in the County of Essex, and Earl of Bindon, in the County of Dorset. His son, the seventh Earl, was Lord-Lieutenant of Essex and is also remembered as the owner of the slave Scipio Africanus. The Earl was childless and on his early death in 1722 the barony of Chesterford and earldom of Bindon became extinct.

He was succeeded in the earldom of Suffolk by his uncle, the eighth Earl. He died unmarried and was succeeded by his younger brother, the ninth Earl. His wife Henrietta Howard, Countess of Suffolk, was a mistress of King George II. On Lord Suffolk's death the titles passed to his son, the tenth Earl. He represented Bere Alston in the House of Commons. He was childless and on his death the line of the eldest son of the first Earl failed. The earldom was inherited by the late Earl's third cousin, the fourth Earl of Berkshire, who became the eleventh Earl of Suffolk as well (see the Earl of Berkshire for earlier history of this branch of the family). He was succeeded by his grandson, the twelfth Earl (the son of William Howard, Viscount Andover). He was a politician and served as Lord Privy Seal and as Secretary of State for the Northern Department. On his death the titles passed to his posthumous son, the thirteenth Earl. He died as an infant and was succeeded by his great-uncle, the fourteenth Earl. He was the third son of the eleventh Earl. He sat as Member of Parliament for Castle Rising, Malmesbury and St Michael's. On his death in 1783 the line of the fourth son of the first Earl of Berkshire failed.

The late Earl was succeeded by his third cousin, the fifteenth Earl. He was the great-grandson of Colonel the Hon. Philip Howard, seventh son of the first Earl of Berkshire. Lord Suffolk and Berkshire was a General in the Army. On his death the titles passed to his son, the sixteenth Earl. He represented Arundel in the House of Commons. His son, the seventeenth Earl, sat as Whig Member of Parliament for Malmesbury. When he died the titles passed to his son, the eighteenth Earl. He represented Malmesbury in Parliament as a Liberal. He was succeeded by his son, the nineteenth Earl. He was killed in action in the First World War. His eldest son, the twentieth Earl, was a bomb disposal expert. He was killed in 1941 while trying to defuse an unexploded bomb and was posthumously awarded the George Cross. As of 2010[update] the titles are held by his eldest son, the twenty-first Earl, who succeeded on his father's death in 1941.

The family seat is Charlton Park, Wiltshire, near Malmesbury, Wiltshire.