Elections to Cardiff Council take place every four years. The last election was 1 May 2008.[2]

Following the 2008 local elections in Cardiff there is still no party with an overall majority. The Lib Dems gained three, increasing their total number of councillors to 35, and have formed an administration with Plaid Cymru, with Rodney Berman as leader of the Council. The Conservatives replaced Labour as the official opposition, having gained five councillors - the Labour party suffered badly, losing 14 councillors and reducing their total number to 13. Plaid Cymru gained four councillors, increasing their representation to seven. Three independent councillors were elected; two former Conservatives who had left the group in 2006 being joined by an additional member.

Municipal life in Cardiff dates back to the 12th century, when Cardiff was granted borough status by the Earls of Gloucester. The offices of the Mayor, Aldermen, and Common Councillors developed during the Middle Ages. In 1905, Cardiff became a City, and the Borough Council became a City Council.

The City of Cardiff is the county town of Glamorgan. However, prior to 1974, Cardiff was a County Borough in its own right and not subject to Glamorgan County Council. Council reorganisation in 1974 paired Cardiff and the Vale of Glamorgan together as district councils subject to the new county of South Glamorgan. Further local government restructuring in 1996 resulted in Cardiff City's district council becoming once again a unitary authority - the present Cardiff Council.

The unitary authority area is divided into 29 electoral wards. Most of these wards are coterminous with communities of the same name. Each community can have an elected council. The following table lists council wards, communities and associated geographical areas. Communities with a community council are indicated with a '*': 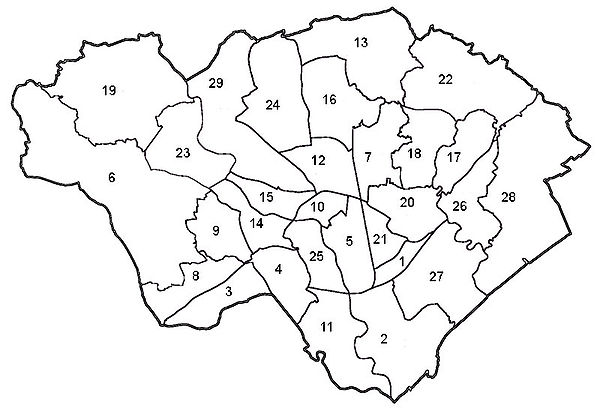