Telemundo reaches 58 percent of Hispanic and Latino American households in 142 markets via over-the-air, cable, and satellite television.[2] An average of 1,035,000 total viewers (aged 2 and older) tuned in for its weekday prime time lineup during 2007.[3] Telemundo is the only Spanish-language network that produces most of its telenovelas.[4] Unlike Univision, which only has Spanish captions, many programs on Telemundo air with closed captions in both Spanish and English.

Telemundo was founded by Ángel Ramos with a television station in San Juan, Puerto Rico in 1954. Telemundo Communications Group, the network's parent company, is part of the NBCUniversal division of Comcast. Don Browne is Telemundo's president. Jeff Gaspin, who is president and COO of Universal Television Group, oversees the network. Telemundo has 1,800 employees,[5] and is headquartered at 2290 West 8th Avenue in Hialeah, a Miami, Florida suburb.[6] The majority of Telemundo shows and programs are filmed in their Miami studios. In 2011, 85% of Telemundo's telenovelas were filmed in Miami.[7]

WKAQ-TV launched the Telemundo brand on March 28, 1954. The station was founded by Ángel Ramos, owner of El Mundo, Puerto Rico's main newspaper at the time, and of Puerto Rico's first radio station, WKAQ, also known as "Radio El Mundo". Ramos wanted to maintain a consistent branding for his properties using the mundo theme (Spanish for "world"), and thus named WKAQ-TV Telemundo (in effect, "Teleworld" or "World TV"). He had tried to obtain a television license as early as the mid-1940s, but due to a Federal Communications Commission (FCC) licensing freeze for all new American television stations due to World War II, Ramos had to wait until 1954 to obtain the license.[8]

In the beginning, Ramos maintained continuity between his radio and television stations by signing an exclusive deal with the most famous and influential actor/comedian/producer in Puerto Rico, Ramón Rivero, better known as Diplo, whose "El Tremendo Hotel", broadcast through WKAQ Radio, was the most popular radio show ever in Puerto Rico. It was Rivero who produced the first comedy/variety television shows for WKAQ Telemundo, La Taberna India, and then La Farándula Corona, shows that catapulted WKAQ to the top of the ratings.

During the 1970s and 1980s, WKAQ-TV, then branded as Telemundo Canal 2, was a major producer of soap operas. The channel was also known by its "fingers" logo—a bold number "2" with the silhouette of two upright fingers inside the number—and called itself "El canal de los dedos" (the channel of the fingers).

In 1984, WNJU in Linden, New Jersey (serving the New York metropolitan area) and KSTS in San Jose, California formed NetSpan, the second Spanish-language television network in the continental United States. They were joined in 1985 by KVEA in Los Angeles. The next year, KVEA's part-owner, Reliance Group Holdings, acquired the Telemundo brand when it purchased Blair Broadcasting. The purchase includedWSCV in Ft. Lauderdale/Miami and Puerto Rico's WKAQ-TV (known for decades as "Telemundo Canal 2"). In late 1986, Reliance purchased WNJU.

In 1987, Saul Steinberg and Henry Silverman of Reliance Capital Group merged all these stations into the Telemundo Group.[9] The new corporation quickly went public, and in 1987 changed NetSpan's name to Telemundo. Later that year, it purchased additional stations in San Francisco, Houston and San Antonio.

In 1994, Telemundo caught the fever of producing 24-hour news. The network launched Telenoticias partnering with Argentina's Artear Network, Antena 3 of Spain, and Reuters. The venture was not successful and the service was sold to CBS. Rebranded as CBS Telenoticias, the network did air all over the Americas.

CBS Telenoticias was sold back to Telemundo and the network branded it Telemundo Internacional.

In 1992, Telemundo went through another management change, as it received former Univision president Joaquin Blaya, who left Univison with four other executives. The next year, Telemundo branded itself with the campaign Arriba, Telemundo, Arriba (lit. "Upwards, Telemundo, Upwards"). Around the same time, the famed Telemundo "T" logo was introduced.

In 1998, Telemundo was bought by a partnership between cable's Liberty Media and conglomerate Sony Pictures Entertainment. Helmed by yet another management team under the leadership of former CBS executive Peter Tortoricci, hopes of attracting the bilingual market were explored. The Lo mejor de los dos Mundos ("The best of both Worlds") campaign was launched. Several billboards went up in cities such as Miami and San Francisco heralding a "new era" for Telemundo. Former CBS News Vice President Joe Peyronnin founded Telemundo's network news division in 1999 and served as its Executive Vice-President until 2006. 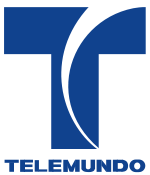 The current logo of Telemundo

On April 12, 2002, Telemundo was purchased by NBC for $2.7 billion and is now a part of NBC Universal.[5] Jim McNamara remained at the helm of the network. Local stations began producing early morning news to be more competitive in their respective markets; The Telemundo "T" logo received an overhaul. Telemundo's main competitor, Univision, continued to have an upper hand in the ratings, although not in all time slots.

News programs were created in the wake of 9/11. "Hoy en el Mundo" ("Today in the World"), anchored by Marian de la Fuente and Jose Diaz-Balart, went on the air informing viewers of national and international events. This program and its companion show "De Mañanita" ("In Early Morning") were cancelled due to the much heralded arrival of Maria Antonieta Collins from Univision. "Cada Día con Maria Antonieta" ("Every Day with Maria Antonieta") went on the air in October 2005. She continued to host the program along with the much recycled Diaz-Balart as co-host. Diaz-Balart was anchor of Telemundo's morning news program called "Noticiero Telemundo: Primera Hora" ("Telemundo Newscast: Early Morning"), later to be anchored by Ana Patricia Candiani. "Cada Dia con Maria Antonieta" was cancelled 2 years later and replaced by "Levantate" another hybrid of news, cooking, and information. This show was produced by Telemundo of Puerto Rico when it began airing. The hybrid included local participation of Telemundo stations in Miami, New York City, and Los Angeles. The show was later revamped, dropped the local cut ins and began production at the Telemundo headquarters in Hialeah, Florida.

In 2004, Telemundo created Telemundo Television Studios in Miami. The network also began subtitling many of its telenovelas into English via closed captioning. Under NBC, Telemundo gave greater emphasis to original programming and product placement. The network was spending $100 million a year producing its own shows around mid-decade.[5] After it was purchased by NBC Universal, Telemundo decided to stop importing telenovelas from Latin America and to start producing its own. To that end, Telemundo partnered with Colombian production company RTI Colombia and the Mexican production company Argos Comunicación. Telemundo's telenovelas follow the Mexican model. To have its telenovelas recognized by the audiences of the US and Latin America, Telemundo hired famous actors and actresses from Mexico, Colombia, Venezuela, Argentina, and Puerto Rico. Telemundo now also hires US-born Hispanic actors and actresses who fluently speak Spanish.

NBC officials asked McNamara to resign and replaced him with Don Browne, in 2005. Browne had been head of the NBC affiliate WTVJ in Miami.

In March 2007, NBC Universal announced that it had restructured Telemundo's entertainment division in an effort to narrow Univision's ratings dominance.[11] Starting in the fall of 2007, the network was to have cut the first commercial break in every prime time show to only 60 seconds in length.[12] It also planned to air the 2008 series Idolos de Juventud uninterrupted, using pervasive product placement instead of traditional ad spots.[13] NBC also announced the intention to dispose of the original Telemundo station in Puerto Rico (Channel 2) and Los Angeles' KWHY to finance the acquisition of Oxygen Media. On 21 December 2007, NBC Universal announced that WKAQ-TV was no longer for sale, indicating that Telemundo Puerto Rico would stay within the NBC family.[14]

On March 18, 2008 Grupo Televisa and NBC Universal announced a 10-year multiplatform agreement that would allow 1000 hours of Telemundo programming, including news, entertainment, specials, and sports, to be broadcast over not only Televisa's free-to-air channels, but also Televisa's SKY México and cable system starting in April, as well as a planned Telemundo pay channel to be launched later in the year. On October 8, 2008, Hillary Hattler the station's president gathered several employees and offered them a "retirement plan", but the initiative gathered criticism from most of those present in the meeting.[15] 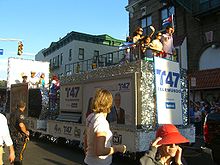 Collins announced in 2008 that she was to leave Telemundo when her contract expired in August that year and that she wished to return to news anchoring.[16] "Cada Dia" was cancelled that May due to low ratings, and was replaced by a new morning show called "Levántate" ("Get up"), which aired live from Telemundo's WKAQ-TV, with segments out of WSCV in Miramar, Florida, and also out of New York, Los Angeles, and Mexico studios.

On November 14, 2008 it was announced that Telemundo would end its two-year online relationship with Yahoo! on January 1, 2009 to launch a standalone hub at telemundo.com, with Microsoft as content distributor.[17]

On April 23, 2009 Telemundo became the first U.S.-based Spanish-language network to begin airing its prime time programming in 1080i 16:9 high definition. Initially, Telemundo O&Os in nine markets (New York, Los Angeles, Chicago, Dallas-Fort Worth, San Francisco, Houston, Miami, Las Vegas, and Puerto Rico) were to air Telemundo programming in HD. The remaining O&Os were to phase in HD programming over the next twelve months. It was unknown if and when third-party-owned affiliates would follow suit.

Telemundo and Televisa launched a jointly owned network in Mexico in August 2009. The new network is available on cable and satellite in Mexico.

Telemundo airs its 8–11 pm (ET/PT) weekday programs (usually telenovelas) using a form of the Turner Time scheduling strategy used by TBS from 1981 until 1997. That is to say, each program starts a few minutes after its officially scheduled time, typically three or four minutes after the hour. Shows also bleed over into the next time slot. This encourages viewers to stay tuned to Telemundo instead of joining another channel's program in progress. The 11 pm news broadcasts start at the conventional time, however. The reverse is the case on weekends when football matches are aired, when all programs airing prior to the game are aired five minutes before the hour or half-hour; on weekend days when football matches are not aired, regularly scheduled programming is aired in their conventional timeslots.

Telemundo was once the only US Spanish-language network to provide English subtitles of its weekday prime-time programming. They appear as closed captions on CC3 in standard definition and digital service 2 in HDTV. The network produces the translations in-house and intends them to attract Hispanic viewers who may not be fluent in Spanish.[21] Programs appear with a special digital on-screen graphic at the start of each episode (see right).

The captions premiered with La Cenicienta and Amor Descarado on September 8, 2003.[21] This generated a small, loyal fan base among English-speaking viewers.[22] Subtitles briefly disappeared without notice starting October 14, 2008, amid budget cuts and the change from analog to digital at Telemundo. The network cited the need to concentrate resources on its core Spanish-speaking audience, but soon reversed the cancellation due to popular demand.[22] They began reappearing on March 30, 2009.