Chuy Province or Chui Province (Kyrgyz: Чүй областы, Russian: Чуйская область) is the northernmost province (oblast) of the Kyrgyz Republic. It is bounded on the north by Kazakhstan, and clockwise, Issyk Kul Province, Naryn Province, Jalal-Abad Province and Talas Province. Its administrative center is Bishkek, but from 2003 to May 2006 it was Tokmok. 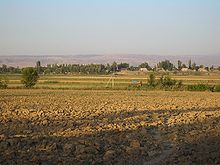 The main northwest part of the province is flat, a rarity in Kyrgyzstan. This is the valley of the Chu River. The valley's black soil is very fertile and is largely irrigated with water diverted from the Chu River. Agricultural production includes wheat, maize, sugar beets, potatoes, lucerne, and various vegetables and fruits. During the Soviet period, various agro-processing and other industries were established throughout the province, giving rise to a number of urban centers such as Tokmok, Kant and Kara-Balta. The population is considerably more heterogeneous than that of the other regions of the country, with many ethnic Russians, Ukrainians, Dungans, Koreans, Germans, etc.

The main east-west transportation axis of the province is the Taraz-Bishkek-Balykchy highway, running through most major cities of the province. This road's section west of Bishkek is part of European route E40, known locally as Highway M-39 (based on the old USSR highway numbering scheme). The same numbers apply to the road that continues north-east from Bishkek toward Almaty, crossing the Chuy River and leaving the province for Kazakhstan at Korday border crossing.

The only railway in the province runs along the same Taraz-Bishkek-Balykchy route; it sees comparatively little use these days. 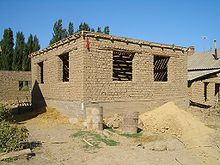 According to the 2009 Census, the ethnic composition (de jure population) of Chuy Province was:[6]

Chuy province is divided administratively into 8 districts, and the district-level city of Tokmok: [7][8][9][10] The Chuy District surrounds the city of Tokmok. The Alamudun District surrounds the city of Bishkek, which however is not part of Chuy Province but a province-level administrative unit in its own right. The southwestern heel is administered as two exclaves of Jaiyl and Panfilov Raions, Panfilov having a valley to the southeast and Jaiyl the mountains to the north, west and southwest. Raions below are listed from east to west.