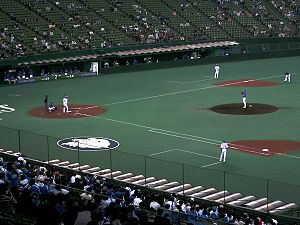 Nippon Professional Baseball or NPB is the highest level of baseball in Japan. Locally, it is often called Puro Yakyū (プロ野球?), meaning Professional Baseball. Outside of Japan, it is often just referred to as "Japanese baseball." The roots of the league can be traced back to the formation of the "Greater Japan Tokyo Baseball Club" (大日本東京野球倶楽部, Dai-Nippon Tōkyō Yakyū Kurabu?) in 1934 and the original Japanese Baseball League. NPB was formed when that league reorganized in 1950.

The league consists of two six-team circuits, the Central League and the Pacific League. Each season the winning clubs from the two leagues compete in the Japan Series, the championship series of NPB.

The season starts in late March or early April and ends in October with two or three all star games in July. In recent decades, the two leagues each scheduled 130, 135 or 140 regular season games with the best teams from each league going on to play in the "Nippon Series" or Japan Series. Starting in 2004, the Pacific League has had a postseason tournament to determine who advances to the Japan Series while the Central League initially did not. That changed in 2007, when the Central League adopted the Pacific League's tournament as well and the tournament became known as the Climax Series with the two winners, one from each league, competing in the Japan Series.

Play in the Pacific League is similar to that in American League baseball, with the use of designated hitters, unlike the Central League, which doesn't have the DH and is closer to National League baseball. Unlike North American baseball, Japanese baseball games may end in a tie. If the score is tied after nine innings of play, up to three additional innings will be played. If there is no winner after 12 innings, the game is declared a draw, except in the postseason, where games that are tied after 15 innings must be replayed. Other differences from MLB are that the general play is less aggressive, there are fewer home runs, and the ball is slightly smaller and wound more tightly. The strike zone, until 2009 was defined slightly differently to the MLB standards.[citation needed]

Unlike American pro teams, Japanese professional baseball teams are usually named after their corporate owners/sponsors rather than the cities or regions in which they play. This is because franchising does not have strong territorial requirements as in the Major Leagues; the teams used to locate in clustered metropolitan areas in Japan's center (Tokyo, Nagoya) and south (Osaka, Fukuoka) areas. The current trend is to include the place names as well as owners/sponsors in an attempt to gain support from the franchised communities. Currently, only the Giants, Tigers, Dragons and Buffaloes do not include a place name, and Maruha Corporation, owner of the Yokohama BayStars, has chosen not to include the company name in its team name, a first in Japanese baseball. Nevertheless, mass media still tend to choose the sponsor names in abbreviations on standing tables.

Financial problems hinder the league as a whole, but the problem is not a simple one to solve. It is believed that with the exception of the Yomiuri Giants and the Hanshin Tigers, all teams are operating with considerable subsidies, often as much as ¥6 billion (about US$50 million), from their parent companies. A rise in the salaries of players is often blamed, but, from the start of the professional league, parent companies paid the difference as an advertisement. Most teams have never tried to improve their finances through constructive marketing. Until Nippon-Ham Fighters moved to Hokkaidō, there were six teams in Tokyo and its surrounding area and four teams in the Osaka–Kōbe region before Nankai Hawks (now Fukuoka SoftBank Hawks) moved to Fukuoka. The market was flooded, but this was considered acceptable, as there were no professional team sports challenging baseball's popularity.

Until 1993, baseball was the only team sport played professionally in Japan. In that year, the J. League professional association football league was founded. The new football league placed teams in prefectural capitals around the country - rather than clustering them in and around Tokyo - and the teams were named after their locations rather than after corporate sponsors. Some Japanese baseball teams responded to the success of the J. League by de-emphasizing the corporate sponsors in their marketing efforts and/or by relocating to outlying regions of the country.

The wave of players moving to Major League Baseball, which began with Hideo Nomo "retiring" from the Kintetsu Buffaloes, then signing with the Los Angeles Dodgers, has also added to the financial problems. Attendance suffered as teams lost their most marketable players, while TV ratings declined as viewers tuned into broadcasts of Major League games.[1] To discourage players from leaving to play in North America, or to at least compensate teams that lose players, Japanese baseball and MLB agreed on a posting system for players under contract. MLB teams wishing to negotiate with a player submit bids for a "posting fee", which the winning MLB team would pay the Japanese team if the player signs with the MLB team. Free agents are not subject to the posting system, however.

When the Boston Red Sox signed Daisuke Matsuzaka in 2006, he became the most expensive trans-Pacific transfer ever. While details remain undisclosed, several sources cite Matsuzaka as having received a guaranteed $52 million for a six-year contract (with elevator clauses potentially bringing the value up to $60 million), in addition to the $51.1 million posting fee that the Red Sox paid his former team, Seibu Lions, to release him.

On September 18, 2004, professional baseball players went on a two-day strike, the first strike in the history of the league, to protest the proposed merger between the Orix BlueWave and the Osaka Kintetsu Buffaloes and the failure of the owners to agree to create a new team to fill the void resulting from the merger. The strike was settled on September 23, 2004, when the owners agreed to grant a new franchise in the Pacific League and to continue the two-league, 12-team system. The new team, the Tohoku Rakuten Golden Eagles began play in the 2005 season.

Prior to 1950, professional baseball in Japan was the Japanese Baseball League. Before the 1950 season, the team owners reorganized into the NPB.

From 1973 to 1982, the Pacific League employed a split season with the first half winner playing against the second half winner in a mini-playoff to determine its champion. Then in 2004, the Pacific League played five fewer games than the Central League teams during the regular season and used a new playoff format to determine its champion. The teams in third and second place played in a best two of three series (all at the second place team's home ground) with the winner of that series going on to play the first place team in a best 3 of 5 format at its home ground. In the end, the Seibu Lions finished in second place, defeated Nippon-Ham 2 games to 1, went on to take 3 of 5 games in Fukuoka against the Daiei Hawks and then defeated the Chunichi Dragons in the Japan Series, 4 games to 3, capping off their grueling playoff drive with a well-earned championship. The System was proved successful when Pacific League's team continues to win the Japan Series in the following two seasons, until this playoff system was applied to both leagues as the "Climax Series" starting in 2007, which Chunichi Dragons from Central League beat Hokkaido Nippon-Ham Fighters from Pacific League in Japan Series.

The two leagues began interleague play in 2005, with each team playing two 3-game series (one home, one away) against each of the six teams in the other league. This was reduced to two 2-game series in 2007. All interleague play games are played in a 7-week span near the middle of the season. Currently Pacific League's teams won all the interleague titles.

In 2011 Miyagi Baseball Stadium, home of the Rakuten Eagles, was badly damaged by the Tohoku earthquake.[2] 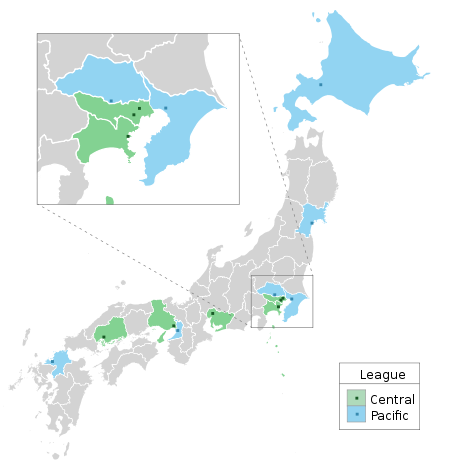