An American Football field. The Canadian field (below) differs slightly in dimensions and design, but is quite similar, as shown below. The numbers on the field indicate the number of yards to the nearest end zone.

Diagram of a Canadian football field

"Gridiron" football developed in the late 19th century out of the older games related to the games now known as rugby football and association football. It is distinguished from other football codes by its use of helmets and shoulder pads, the forward pass, the system of downs, a line of scrimmage, more specialist positions and formations, free substitution, platooning—the use of different players for offense and defense, measurements in yards, and the ability to score points while not in possession of the ball by way of the safety. Walter Camp is credited with creating many of the rules that differentiate gridiron football from its older counterparts.

The international governing body for all forms of gridiron football is the International Federation of American Football (IFAF).

The term "gridiron" in reference to football first developed in the United States. It originally referred to the sport's playing field, alternately known as the "grid", due to the its patterned markings which give it the appearance of a gridiron.[7][8] The terms "gridiron" and "grid" were thence applied loosely to the game itself.[8]

Especially outside of the U.S. and Canada, the terms "gridiron" and "gridiron football" are often used to distinguish the North American sport from other codes of football. "Gridiron" is particularly common in Australia and New Zealand.[5][6][9] In some cases the terms are used specifically for American football, sometimes even in distinction from Canadian football,[10] though it is now often used as a blanket term for all North American variants.[3]

Play of the game

This is a minimal description of the game in general, with elements common to all or almost all variants of the game. For more specific rules, see each code's individual articles.

Prior to the start of a game, a coin toss determines which team will kick off the ball to their opponent. Each team lines up on opposite halves of the field, with a minimum ten yards of space between them for the kickoff.

At this point, play from scrimmage begins. The team in possession of the ball is on offense and the opponent is on defense. At least half of the players (the exact number varies by code) on the offense must line up on the line of scrimmage, including the snapper, who handles the ball before play commences; the rest must line up behind the line. Neither the offense nor the defense can cross the line of scrimmage before the play commences. Once the offense sets in formation, the snapper snaps the ball to one of the players behind him. The play has now commenced, and the offense's goal is to continue advancing the ball toward their opponent's end zone. This can be done either by running with the ball or by a rule unique to gridiron football known as the forward pass. In a forward pass, a player from behind the line of scrimmage throws the ball to an eligible receiver (another back or one player on each end of the line), who must catch the ball before it touches the ground. The play stops when a player with the ball is tackled to the ground, runs out of the boundaries of the field, or a forward pass hits the ground without being caught. In order to keep play moving, the offense must make a certain amount of progress (10 yards in most leagues) within a certain number (3 in Canada, 4 in the United States) of plays, or downs. If the offense does indeed make this progress, a first down is achieved, and the team gets 3 or 4 more plays to achieve another 10 yards. If not, the offense loses possession to their opponent at the spot where the ball is. More commonly, however, the team on offense will, if they have a minimal chance of gaining a first down and have only one play left to do it (fourth down in the U.S., third down in Canada), attempt a scrimmage kick. There are two types of scrimmage kick: a punt is when the ball is kicked downfield as far as possible; the kicking team loses possession of the ball after the kick and the receiving team can attempt to advance the ball. The other scrimmage kick is a field goal attempt. This must be attempted by place kick or (more rarely) drop kick, and if they pass through the goal set at the edge of the opponent's end zone, the team scores three points (four in rare variants and special circumstances).

If the team in possession of the ball, at any time, advances the ball into the end zone, it is a touchdown, and the team scores six points and a free play known as a try. In a try, a team attempts to score one or two points (rules vary by each league, but a field goal on a try is usually worth one point while another touchdown is worth two).

If the player with the ball is tackled while he is in his own end zone, the defense scores a safety, worth two points.

After a try, safety or field goal, the team that had possession of the ball goes back to the middle of the field and kicks the ball off to their opponent, and play continues as it did in the beginning of the game.

Play continues until halftime. (Each team switches sides of the field with each other halfway through each half, at the end of a quarter.) After the halftime break, the team that did not kick off at the beginning of the game kicks off. Whichever team has more points at the end of the game is declared the winner; in the event of a tie, each league has its own rules for overtime to break the tie.

Origin of the gridiron 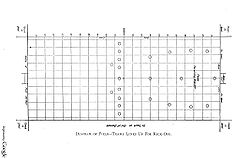 1904 diagram of an American football field, clearly showing the gridiron-like pattern of the lines

According to the early rules of American football, fields were marked in a checkerboard pattern of grids. The ball would be snapped in the grid in which it was downed on the previous play. This system was abandoned in favor of the system of yard lines and hash marks now used and brought the gridiron design more in line with Canadian football.[citation needed]

A football field is 330 feet long by 160 feet wide. At each end are goal posts set 18 feet 6 inches apart, with a crossbar 10 feet above the ground. The field is marked off in chalk lines similar to a tennis court, these lines being 5 yards apart. The centre of the field where the play starts is 55 yards from either end. It is usually customary to run lines parallel to the sides of the field, also 5 yards apart, but as a field is but 160 feet wide the first and last of these lines are but 5 feet from the side lines instead of 5 yards. The lines on a football field make a checkerboard effect and have given to the field the name of "gridiron."

An example of a field that was marked in the original gridiron pattern was the old Archbold Stadium at Syracuse University, which has since been torn down.[12]

The word gridiron alone can refer either to the field or to the sport. In North America, however, it is mostly used in reference to the field, usually in a somewhat figurative or poetic sense (e.g. "the players are getting set to battle it out on the gridiron".) In some other English-speaking countries—particularly Australia and New Zealand—it is the primary term used to refer to the sport, differentiating it from other forms of football such as Australian football, association football, rugby league, and rugby union.[5][6] In British parlance the most frequently used term is American football, but gridiron is also used to describe the game.[4][13]