Administrative divisions of the Republic of China

Administrative divisions of the Republic of China

Since Taiwan province was streamlined in 1997, all 5 special municipalities, 3 provincial cities and 14 counties are directly under the central government (i.e., Executive Yuan).

See also: History of the political divisions of China#Republic of China

The Republic of China was founded on Mainland China, following most of the administrative areas from Qing Dynasty, but divided Inner Mongolia into four provinces, and setup few couples of Yuan-controlled municipalities. After the World War II in 1945, Manchuria was reincorporated into the Republic of China as 9 provinces. Taiwan and the Pescadores was also returned to the Republic of China and was organized into Taiwan Province. By this time the top-level divisions was a total of 35 Provinces, 12 Yuan-controlled municipalities, one Special administrative region and Two Regions (Mongolia and Tibet).

After its loss of mainland China to the Communist Party of China in the Chinese Civil War and its retreat to Taiwan in 1949. The jurisdiction of the ROC was restricted to only Taiwan, the Pescadores, and a few offshore islands of Fukien, which also called the "Free Area of the Republic of China" in the Constitution. In most ordinary legislation, the term "Taiwan Area" is used in place of the "Free Area", while Mainland China is referred to as the "Mainland Area".

The Kuomintang (KMT) continued to regard the Republic of China as the sole legitimate government of China, so the published divisions still includes whole the territory of the ROC government's claim, including mainland China and Outer Mongolia, which kept in place to validate its claim as the legal government of China.

Maps of China and the world published in Taiwan sometimes show provincial and national boundaries as they were in 1949, not matching the current administrative structure as decided by the Communist Party of China post-1949 and including outer Mongolia, northern Burma, and Tannu Uriankhai (part of which is present-day Tuva in Russia) as part of China (territories over which the PRC has renounced sovereignty). In the meantime, the Republic of China has not recognized any of the changes made to the administrative structure of the mainland, and has never retracted its claim to mainland China and Outer Mongolia. Accordingly, the official first-order divisions of Republic of China remain the historical divisions of China immediately prior to the loss of mainland China.

The ROC government also made some changes in the area under its control, two more municipalities have been set up in Taiwan (Taipei in 1967, Kaohsiung in 1979), the number of municipalities becomes 14. And the provincial governments of Fujian and Taiwan have been largely streamlined, since 1949 and 1998, respectively. As the final version of division list in 2005[2], The political divisions of the ROC becomes: 35 provinces, 1 special administrative region, 2 Regions (Tibet and Outer Mongolia), 14 special municipalities, 14 leagues, and 4 special banners. For second-order divisions, under provinces and special administrative regions, there are counties, provincial cities (56), bureaus (34) and management bureaus (7). Under provincial-level municipalities there are districts, and under leagues there are banners (127).

Since 1949, the most controversial part of the political division system of the ROC has been the existence of the Taiwan Province, as its existence was part of a larger controversy over the political status of Taiwan. Since 1997, most of the Taiwan provincial government's duties and powers have been transferred to the national government of the Republic of China in the constitutional changes. The much smaller Fujian province consisting of Kinmen and Matsu, on the other hand, had most of its authority passed off to its two counties.

The central government operates three regional Joint Service Centers (區域聯合服務中心) outside Taipei as outposts of the government ministries in the Executive Yuan, similar to the cross-departmental mode of working in the Government Offices in England. These regions, laid out the Comprehensive National Spatial Development Plan for Taiwan (臺灣地區國土綜合開發計劃), can be considered a de facto level of government, perhaps equivalent to de jure provinces or similar to the English regions. There is one regional service center for each of the Southern Taiwan Region (with the center in Kaohsiung), the Central Taiwan Region (Taichung), and the Eastern Taiwan Region (Hualien). The Northern Taiwan Region is served by Taipei, the central government's administrative headquarters and de facto capital.

There has been some criticism of the current administrative scheme as being inefficient and inconducive to regional planning. In particular, most of the administrative cities are much smaller than the actual metropolitan areas, and there are no formal means for coordinating policy between an administrative city and its surrounding areas.

Before 2008, the likelihood of consolidation was low. Many of the cities had a political geography which were very different from their surrounding counties, making the prospect of consolidation highly politically charged. For example, while the Kuomintang argued that combining Taipei City, Taipei County, and Keelung City into a metropolitan Taipei region would allow for better regional planning, the Democratic Progressive Party argued that this is merely an excuse to eliminate the government of Taipei County, which it had at times controlled, by swamping it with votes from Taipei City and Keelung City, which tended to vote Kuomintang.

On 1 October 2007, per legislation newly coming into force, Taipei County was upgraded to become a quasi-municipality (準直轄市) on the same level as Kaohsiung City and Taipei City.[5] It is allowed the organizational and budgetary framework of a de jure municipality, but is still formally styled as a county. The Taichung County and City were also lobbying the central government for a similar status. Following the example of Taipei County, Taoyuan County is also set to be upgraded to a quasi-municipality on 1 January 2011, on the condition that its population stays above 2 million at the date of elevation.[6]

President Ma Ying-jeou of Kuomintang in his 2008 election campaign platform advocated for a rearrangement of three municipalities and 15 counties. Since his inauguration, his administration had started to prepare for this.[7] At the end of this process, proposals for the following were approved by the Ministry of the Interior on 23 June 2009: promotion of Taipei County to become the city of New Taipei awaiting further merger with Taipei Municipality and Keelung City, the merger of Kaohsiung Municipality and County, and the merger of the City and County to form a promoted Taichung Municipality.[8] In the same meeting, the merger of the City and County of Tainan was referred to the Cabinet (Executive Yuan). This merger and promotion proposal was finally approved on 29 June 2009 to give the Tainan Municipality (臺南市).[9] All these re-arrangements were finally carried out on 25 December 2010.

Proposals for ROC municipalities and counties 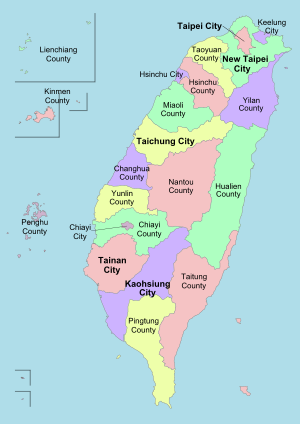 Under the ROC administrative scheme, some cities and counties may share the same name, but are independent administrations, this happens in Chiayi City and Chiayi County, Hsinchu City and Hsinchu County. Generally, special municipalities have the largest administrative area of all three levels of cities, then provincial cities, and finally county-controlled cities, in that order.

Special municipalities (Chinese: 直轄市; pinyin: zhíxiáshì) are one of top-level divisions in the Republic of China (Taiwan), directly governed by the Executive Yuan. In the laws, a place gathered more than 1.25 million residents and with political, economical or cultural importance may become a special municipality.

Provincial cities (Chinese: 市; pinyin: shì), are cities lesser in rank than special municipalities; formerly governed by the provinces, after the provinces are streamlined they directly governed by the Executive Yuan. In the laws, a place gathered residents between 0.5 million and 1.25 million and with political, economical or cultural importance may become a provincial city.

Counties (Chinese: 縣; pinyin: xiàn), are one of administrative divisions under provinces; formerly governed by the provinces, after the provinces are streamlined they directly governed by the Executive Yuan. In ROC laws, a county with more than two million residents can acquire some status equal to a special municipality. Taipei County had used this rule since October 2007 until elevated to New Taipei City in December 2010; while this rule also applied to Taoyuan County from 2011.

The romanization used for ROC placenames above the county level is a modified form of Wade-Giles, ignoring the apostrophes and hyphens of the original, thus yielding "Taipei" instead of "T'ai-pei" and "Yilan" instead of "I-lan", for example. Some postal map romanizations also exist, like "Keelung" and "Kinmen". In 2002, Tongyong Pinyin was adopted to be the national standard of Chinese romanizations. Most townships and county-controlled cities are romanized in this way at this time. However, some local administrations, like Taipei and Taichung decided to use Hanyu Pinyin. In 2009, Tongyong Pinyin was replaced by Hanyu Pinyin as the ROC government standard.[10][11] Recently, Most of the divisions are romanized by Hanyu Pinyin system, but some local government still use Tongyong Pinyin as well, like Kaohsiung. In 2011, the ROC minister of the Interior restored historical romanizations for two towns, Lukang and Tamsui, which developed in early times.