Deutsche Bahn
For other meanings of Bahn, see Bahn (disambiguation).

Deutsche Bahn AG (DB AG, DBAG or DB) is the German national railway company, a private joint stock company (AG). Headquartered in Berlin,[2] it came into existence in 1994 as the successor to the former state railways of Germany, the Deutsche Bundesbahn of West Germany and the Deutsche Reichsbahn of East Germany. It also gained ownership of former railway assets in West Berlin held by the VdeR.

DB is organized as a business group and has over 500 subsidiaries.[3] It describes itself as the second-largest transport company in the world after Deutsche Post AG and is the largest railway operator and infrastructure owner in Europe. About two billion passengers are carried each year.

DBAG has taken over the abbreviation and logo DB from the West German state railway Deutsche Bundesbahn, although it has modernised the logo. Erik Spiekermann designed the new corporate font DB type.

Originally DBAG was headquartered in Frankfurt am Main but moved to Potsdamer Platz in central Berlin in 1996, where it occupies a 26-story office tower designed by Helmut Jahn at the eastern end of the Sony Center and named BahnTower. As the lease was to expire in 2010, DB had announced plans to relocate to Berlin Hauptbahnhof, and in 2007 a proposal for a new headquarters by 3XN Architects won an architectural competition also including Foster + Partners, Dominique Perrault and Auer + Weber.[4] However, these plans have been put on hold and the BahnTower leased for at least three more years.[5] A move to Hamburg was briefly considered in 2005, but these plans were abandoned after political pressure.[6]

While the railway network in Germany dates back to 1835 when the first tracks were laid on a 6 km (3.7 mi) route between Nuremberg and Fürth, Deutsche Bahn has been a relatively recent development in German railway history. Founded in January 1994 as a joint stock company, Deutsche Bahn was designed to operate the railways of both the former East and West Germany after unification in November 1989 as a single uniform privately-run company.[7] There are three main development periods in this unified German railway: formation, early years (1994–1999), and 1999 to the present

In December 2007, DB reorganised again, bringing all passenger services into its DB Bahn arm, logistics under DB Schenker and infrastructure and operations under DB Netze. 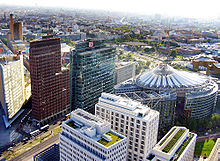 DB building, across the street from the Sony Center in Potsdamer Platz in Berlin.

The DB group (Deutsche Bahn AG) is divided into four main operations groups: Arriva, DB Bahn, DB Netze and DB Schenker. These subsidiaries are companies in their own right, although most of them are 100% owned by DBAG.[1]

DB Bahn is the group that manages passenger travel within Germany. Originally called Reise & Touristik, this group is responsible for the managing, ticketing, servicing and running of all German Intercity-Express, EuroCity, Intercity and Regionalbahn trains, and many commuter-oriented urban Stadtschnellbahn (generally abbreviated as S-Bahn) networks within Germany. The group also handles the information and customer service side of the operation.[1]

DB Fernverkehr AG is a semi-independent division of Deutsche Bahn that operates long-distance passenger trains in Germany. It was founded in 1999 in the second stage of the privatisation of German Federal Railways under the name of DB Reise&Touristik and renamed in 2003.

DB Fernverkehr operates all InterCityExpress and InterCity trains in Germany as well as several EuroCity trains throughout Europe. Unlike its sister companies DB Regio and Railion (formerly DB Cargo), DB Fernverkehr still holds a de-facto monopoly in its segment of the market as it operates hundreds of trains per day, while all competitors' long-distance services (Veolia Verkehr most notably) combined amount to no more than 10-15 trains per day.

DB Regio AG is the subsidiary of Deutsche Bahn that operates passenger trains on short and medium distances in Germany. Unlike its long-distance counterpart, DB Fernverkehr, it does not operate trains on its own account. Traffic is ordered and paid for by the Bundesländer or their Landkreise. Competition for those state-sponsored services is somewhat more fierce than for long-distance services. Consequently, DB Regio has lost a considerable number of routes to its competitors. Some states have awarded long-term contracts to DB Regio (usually 10 to 15 years), which has sparked harsh criticism from anti-trust groups.

In January 2008 it was announced that, subject to regulatory approval, DB Regio would be taking over Laing Rail in the United Kingdom. This would mean that DB Regio would own Chiltern Railways and be joint operators of London Overground (with MTR Corporation) and Wrexham & Shropshire (with Renaissance Trains). In February 2009, DB Regio was shortlisted to run the Tyne and Wear Metro in Sunderland and Newcastle upon Tyne, UK.[8][9] DB Regio took over the running of the Tyne and Wear Metro on 1 April 2010.

DB Schenker is the freight logistics subsidiary of DB and one of the leading globally integrated logistics service providers. DB Schenker combines all the logistic activities of DB, employing over 88,000 staff spread across some 2,000 locations in about 130 countries.[11] Currently it is[citation needed]

Formerly known as Railion,[1] this company is the largest rail freight distribution company within Europe. Currently the company has over 100,000 shipments daily throughout Europe. This company employs 28,000 people.[12]

DB Schenker Rail has its head office in Mainz, and is the holding company for the five (at 1 January 2009) national subsidiaries Railion Deutschland, Railion Nederland, Railion Danmark, Railion Italy and Railion Schweiz.

Deutsche Bahn placed a bid in May 2010 for the UK-based transport company Arriva. Arriva runs bus and rail companies in 12 European countries. The merger was approved by the European Commission in August 2010, subject to DB divesting some Arriva services in Germany. The merger became effective on 27 August 2010.[13]

It is possible to obtain train times for any journey in Europe from Deutsche Bahn's website.[15]

Trans-Eurasia Logistics is a joint venture with Russian Railways (RZD) that operates container freight trains between Germany and China via Russia.

Members of the board 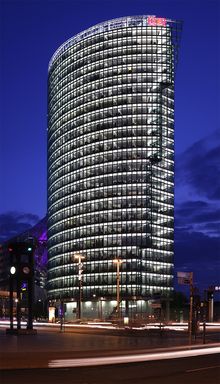 Corporate headquarters (the BahnTower) at Potsdamer Platz in Berlin, Germany

Dr Werner Müller is the current director of the supervisory board (also at Degussa and Ruhrkohle AG).[1]

Previous chairmen of the board were

The planned privatisation is the subject of highly controversial political discussion in Germany. Whereas the government claims the need for fresh capital and efficiency improvements in favour of the privatisation, opponents fear a deterioration of service in many less economic sectors. The main question is whether privatisation should be carried out with the railway system (integrated model) or without (split model). A political trade-off is likely, with the split model as basis, but DB having the right to operate the railway system for 15 years. An open question is the matter of compensation for investments into the system during this time.

The Social-Democrat Minister Wolfgang Tiefensee was to present a bill before the council of ministers which envisaged selling 25% of DB, beginning in 2008. At term, the state should retain control by owning a 51% stake. Deutsche Bahn AG is evaluated at €45 billion.[16] However, the railways are evaluated at €200 billion.[17]

In October 2007, the train drivers' strike was another problem for the privatisation plans. The drivers' union GDL refused to accept the labour contracts between DB and other unions, claiming a 31% pay rise for its members. The strike was the first nationwide railway strike since 1992.[18]