Mannheim
This article is about the city in Germany. For other uses, see Mannheim (disambiguation). 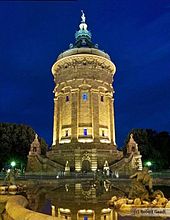 Mannheim on the Rhine and Neckar rivers

Mannheim is a city in southwestern Germany. With about 315,000 inhabitants, Mannheim is the second-largest city in the Bundesland of Baden-Württemberg, following the capital city of Stuttgart.

Mannheim is located at the confluence of the River Rhine and the River Neckar in the northwestern corner of Baden-Württemberg. The Rhine separates Mannheim from the city of Ludwigshafen, just to the west of it in Rhineland-Palatinate. The border of Baden-Württemberg with the Bundesland of Hesse is just north of Mannheim, and Mannheim is just downstream along the Neckar from the city of Heidelberg. Mannheim is the largest city of the Rhine Neckar Area, a metropolitan area with about 2.4 million inhabitants.

Mannheim is unusual among German cities in that the streets and avenues of Mannheim's central area are laid out in a grid pattern, just like most North American and Australian cities and towns. Because of this, the city's nickname is "die Quadratestadt" (the German word for "city of the squares"). One main route through the streets and avenues runs by a large 18th century palace, the Mannheim Palace. This former home of the rulers of the Palatinate now houses part of the University of Mannheim.

The civic symbol of Mannheim is der Wasserturm (the water tower), an old tower that is located just east of the city's centre.

Mannheim is also the location of both the start and the finish of Bertha Benz Memorial Route.

"Mannenheim" ("Home of Manno") is first mentioned in connection with a legal transaction in the year 766, in the "Codex Laureshamensis" from Lorsch Abbey. Mannheim remained a mere village until Frederick IV, Elector Palatine started building the fortress of Friedrichsburg and the adjacent city centre (die Stadt) in 1606 – with its grid of streets and avenues. On January 24, 1607, Frederick IV gave Mannheim the status of a "city", whether it really was one by then or not.

Mannheim was mostly leveled during the Thirty Years War in about 1622 by Johan Tilly's troops, and once again during the Nine Years' War in 1689 by the French Army.

After the rebuilding of Mannheim that began in 1698, the capital of the Electoral Palatinate was moved from Heidelberg to Mannheim in 1720. This was when Karl III Philip, Elector Palatine began the construction of the Mannheim Palace and the Jesuit Church. These were completed in the year 1760.

During the 18th century, Mannheim was the home of the "Mannheim School" of classical music composers. Mannheim was said to have one of the best court orchestras in Europe under the leadership of the conductor Carlo Grua. The royal court of the Palatinate left Mannheim in 1778, and just over two decades later, Mannheim was removed from the Palatinate and given to the Grand Duchy of Baden (in 1802).

In 1819, Norwich Duff made the following observations about Mannheim:[2]

Mannheim is in the Duchy of Baden and situated at the confluence of the Rhine and Neckar over both of which there is a bridge of boats. This is the third town of this name having been twice burnt. The houses are large, and the streets broad and at right angles to each other, and is one of the most airy clean towns I have seen in Germany. It was formerly fortified, but the fortifications were rased in 1806 and gardens fill their places. There is a large chateau here belonging to the Grand Duke and a very good garden; part of the chateau was destroyed when the town was bombarded and has never since been repaired, the other part is occupied by the Grand Duchess widow of the late Grand Duke who was succeeded by his uncle having left only three daughters. She is the sister of Eugene Beauharnais [sic, she was in fact his second cousin]. There is a cathedral, a theatre which is considered good, an observatory, a gallery of pictures at the chateau, and some private collections. About two km (one mile) below the town the Russian Army crossed the Rhine in 1813. Population 18,300.

During World War II, since Mannheim was an important industrial centre for Nazi Germany, Mannheim was heavily damaged during aerial bombing by the R.A.F. and the U.S. Air Force. In addition to bombing the important factories, the R.A.F. razed the city center of Mannheim with nighttime area bombing.

Some sources state that the first deliberate "terror bombing" of German civilians by the R.A.F. occurred at Mannheim on December 16, 1940.[3]

The Allied ground advance into Germany reached Mannheim in late March 1945, which was potentially well-defended by German forces. However, these suddenly abandoned the city and the US 44th Infantry Division entered unopposed on 29 March 1945.[4]

There has been a large American military presence in the Mannheim area ever since (see United States military installations below).

In 2007, Mannheim celebrated its 400th birthday with a series of cultural and other events spread over the whole year. The 400th birthday proper was in 2006, since Frederick IV, Elector Palatine laid the foundations of the Mannheim citadel, on March 17, 1606.

Some important inventions were made in Mannheim.

The "Nationaltheater Mannheim" was founded in 1779 and is the oldest "Stage" in Germany. In 1782 the premier of Die Räuber, written by Friedrich Schiller, was shown.

Mannheim is located in Germany's warmest region, the "Rhine shift". In summer, temperatures sometimes rise up to 35 C° and higher. The highest recorded temperature was 41 C° during the 2003 European heat wave. The daily lows during that time were also very high (around 25 C°). In comparison to other regions of Germany, Mannheim has a higher humidity in summer which causes a higher heat index. Snow is rare, even in the cold months. Precipitation occurs mostly during afternoon thunderstorms during the warmer period (average days of thunderstorms in a year is 40–50). 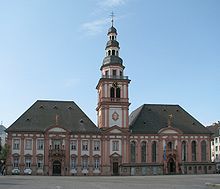 Mannheim University in the palace. 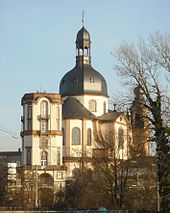 The following locations were part of the "U.S. Army Garrison Heidelberg" but were within the area of the city of Mannheim; They were vacated in 2010 and 2011:

All personell of the U.S. Army military community will leave Mannheim by 2015, some of them moving to Wiesbaden. With the exception of four barracks, all other barracks formerly occupied by the U.S. military had been returned to the German state for conversion to civilian use in 2011. 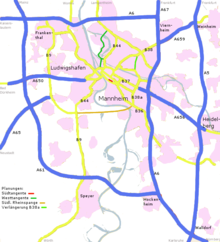 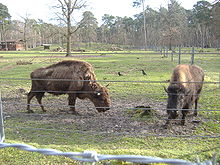 American bison at the Tierpark

The Mannheim/Ludwigshafen area is surrounded by a ring of motorways connecting it to Frankfurt in the north, Karlsruhe in the south, Saarbrücken in the west and Nuremberg in the east.

Mannheim Hauptbahnhof (central station) is at the end of the Mannheim-Stuttgart high-speed rail line and is the most important railway junction in the southwest of Germany, served by ICE high-speed train system with connections to Frankfurt am Main / Berlin, Karlsruhe / Basel and Stuttgart / Munich. A new high speed line to Frankfurt is also planned to relieve the existing Ried Railway (Riedbahn). Mannheim Harbour is the second largest river port in Germany.

Although Frankfurt International Airport is only 65 km to the north, since 2004 there have been daily passenger flights from Mannheim City Airport (IATA code MHG) to Berlin, Hamburg and Saarbrücken.

The RheinNeckar S-Bahn, established in 2003, connects most of the Rhine-Neckar area including lines into the Palatinate, Odenwald and southern Hesse. All S-Bahn lines run through Mannheim Hauptbahnhof, except S5. Further S-Bahn stations are at present Mannheim-Rangierbahnhof, Mannheim-Seckenheim and Mannheim-Friedrichsfeld-Süd.

Metre-gauge trams are operated in Mannheim, Ludwigshafen and Heidelberg by Rhein-Neckar-Verkehr GmbH (RNV), a company wholly owned by the three cities mentioned and a couple of municipalities in the Palatinate. RNV is the result of a merger on 1 October 2009 between the region's five former municipal transportation companies.[7] Interurban trams are operated by RNV on a triangular route between Mannheim, Heidelberg and Weinheim, and the company also operates interurban trams between Bad Dürkheim, Ludwigshafen and Mannheim. In the 1970s a proposal to build a U-Bahn out of the Mannheim and Ludwigshafen tramways was begun, but only small sections were in fact built due to lack of funds. The only underground station in Mannheim is the Haltestelle Dalbergstraße. U-Bahn planning has now stopped. All public transport is offered at uniform prices set by the Verkehrsverbund Rhein-Neckar (Rhine-Neckar transport union, VRN). 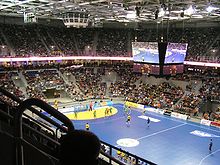 There are two nationally renowned football clubs in Mannheim, SV Waldhof Mannheim 07, who are currently playing in the 4th tier Regionalliga Süd, but who have played in the top tier, the Fußball-Bundesliga; and VfR Mannheim, winner of the German championship in 1949, now playing in the 5th tier Oberliga Baden-Württemberg.

The Adler Mannheim (formerly MERC, Mannheimer Eis- und Rollsport-Club) are an ice hockey team playing in the professional Deutsche Eishockey Liga, having won the championship a total of six times.

The city is home to the Mannheim Tornados, the oldest operational baseball and softball club in Germany. The Tornados play in the first division of the Baseball Bundesliga and have won the championship 11 times, more than any other club.[8]

The WWE visited Mannheim in 2008 and grossed over half a million dollars with over 6500 fans attending the event. 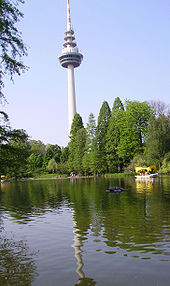 Mannheim is twinned with: