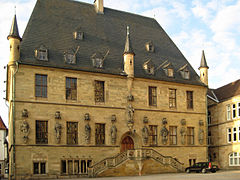 Osnabrück (German pronunciation: [ɔsnaˈbʁʏk]; Low German: Ossenbrügge) is a city in Lower Saxony, Germany, some 80 km NNE of Dortmund, 45 km NE of Münster, and some 100 km due west of Hanover. It lies in a valley penned between the Wiehen Hills and the northern tip of the Teutoburg Forest. As of December 31, 2010, its population was 164,119, making it the third-largest city in Lower Saxony.[2]

Osnabrück developed as a marketplace next to the bishop's see founded by Charlemagne, king of the Franks, 780. Some time before 803, the city became seat of the Prince-Bishopric of Osnabrück. Although the precise date is uncertain, Osnabrück is likely the oldest bishopric in Lower Saxony.

In the year 804 Charlemagne was said to have founded the Gymnasium Carolinum in Osnabrück. This date would make it the oldest German Gymnasium but the charter date is disputed by historians, some of whom believe it could be a forgery.

In 889 the town was given merchant, customs, and coinage privileges by King Arnulf of Carinthia. It is first mentioned as a "city" in records in 1147. Shortly after in 1157, Emperor Frederick Barbarossa granted the city fortification privileges (Befestigungsrecht). Part of the medieval fortification, most of the towers are still visible in the city. Osnabrück became a member of the Hanseatic League in the 12th century, as well as a member of the Westphalian Federation of Cities.

The main period of witch hunting in Osnabrück was between 1561 and 1639, a time of social unrest and tensions because of the Protestant Reformation and the European wars of religion. In the year 1582 during the reign of mayor Hammacher (1565–1588), 163 women were killed as alleged witches, most of them burned. During the tenure of mayor Dr. Pelster between 1636–1639, more than 40 women were killed as witches. In total, 276 women and 2 men were executed after a witch trial for wizardry.

In 1632 a Jesuit university was founded, based on the Gymnasium Carolinum. One year later it was closed under the Swedish reign of the Prince-Bishop. Between 1643-1648 negotiations in Münster and Osnabrück led to the Peace of Westphalia.

In the early 18th century, Osnabrück native Justus Möser wrote an influential social and constitutional history, the Osnabrücker Geschichte, in the town.[3] Following the Seven Years' War, the town's population fell below 6,000, but an economic revival based on the linen and tobacco industries brought growth from the 1780s.[4]

The French Revolutionary Wars brought Prussian troops into the city in 1795, followed by the French in 1803.[5] The town's population remained below 10,000 in this first decade of the nineteenth century.[5] Control of Osnabrück passed to the Electorate of Hanover in 1803 during the German Mediatisation and then briefly to the Kingdom of Prussia in 1806. It was part of the Kingdom of Westphalia from 1807–10, after which it passed to the First French Empire. After the Napoleonic Wars, it became part of the Kingdom of Hanover in 1815. 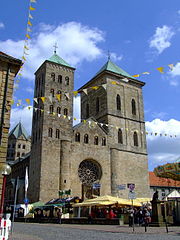 The town's first railroad was built in 1855, connecting it with Löhne. Further rail connections were built in the following decades, connecting Osnabrück with Emden in 1856, Cologne in 1871, and Hamburg in 1874.[6] In 1866 Osnabrück was annexed by Prussia after the Austro-Prussian War and administered within the Province of Hanover. Economic and population growth was fueled by the expansions in the engineering and textile industries, with the Hammsersen weaving mill established in 1869 and the Osnabrücker Kupfer- und Drahtwerk metallurgical firm following in 1873.[5] The last half of the century also brought the expansion of schools and the arrival of electrification and modern sanitation systems.[7]

In 1914 Osnabrück had over 70,000 inhabitants.[5] The outbreak of the First World War brought food rationing; the Allied blockade and a harsh winter in 1917 led to further shortages.[7] Following Germany's defeat in 1918 a council of workers and soldiers appeared during the November Revolution but was replaced by the new Weimar Republic in the following year.[8] As in other parts of Germany, Osnabrück experienced inflation and unemployment in the 1920s, with over 2,000 out of work in 1923 and nearly 14,000 receiving some kind of government assistance in 1928.[9]

Politically, Osnabrück in the 1920s was a bastion of support for the Social Democrats and the Catholic Centre Party. However, in the Reichstag elections of September 1930, the Nazi party received the highest percentage of votes in the city (nearly 28%), exceeding all the other parties. This was a significant increase on their electoral performance of 1928, when only 3.7% of Osnabrückers had supported the party.[10] During the campaigns prior to the two federal elections of 1932, both Adolf Hitler and Joseph Goebbels made speeches before crowds of thousands in the city.[11] 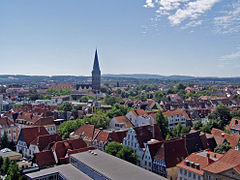 Southern part of the inner city

Following the Nazi seizure of power in January 1933, Osnabrück saw the implementation of National Socialist economic, political, and social programs. These resulted in economic growth for ethnic Germans who did not run afoul of the new regime, and the town went from over 10,000 unemployed in early 1933 to an actual labor shortage by 1938.[12] However, dissenters, supporters of left-wing political parties, and Jews did not share in this growth and found themselves discriminated against, imprisoned, or forced to close their businesses and leave town as Nazi pressure increased as the Second World War approached.[13] During the war, both Jews and Romany were deported to concentration camps and extermination camps [14] The city suffered heavy bombing during World War II, but was rebuilt after the war. In January 2009, 15,000 residents were evacuated when German bomb disposal teams had to come in and defuse two 250 kg (551 lb) World War II bombs.

The war ended in Osnabrück on April 4, 1945, when the XVII Corps of Montgomery's Second Army entered the city with little resistance.[15] Leading Nazis fled the city and the British appointed a new mayor, Johannes Petermann. However, power rested chiefly with the occupiers, represented locally by the military governor, Colonel Geoffrey Day.[16] Relations between the occupiers and the people of Osnabrück were generally peaceful, though tensions existed; some small fights broke out between British soldiers and local youths and some Osnabrückers resented the relationships that developed between the occupiers and local women.[17] Additionally, the British took over more than seventy homes for their own use by the middle of 1946.[18] Amidst shortages, the black market thrived and became a main focus of police activity.[19]

After World War II, when West Germany realigned its states, the city became part of the new state of Lower Saxony in 1946. 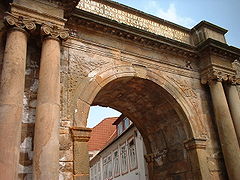 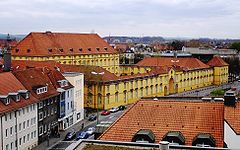 Personalities from Osnabrück include the writer Erich Maria Remarque and the painters Friedrich Vordemberge-Gildewart and Felix Nussbaum. For the Jewish painter Nussbaum the city erected a very modern museum designed by Daniel Libeskind that opened in 1998. This looks like a scaled-down version of the same architect's well-known Jewish Museum in Berlin. British King George I was born and raised here, and the poet and scholar Johann Ernst Hanxleden was born in Osnabrück, as was the President of Germany Christian Wulff, and reggae musician Gentleman. Victory Records recording artists Waterdown, known for their catchy post-hardcore sound, are based in Osnabrück. Actress Birgitta Tolksdorf, who made a name for herself in American television in the 1970s, as well as Peter van Pels, love interest of famous diarist Anne Frank, and his parents Auguste van Pels and Hermann van Pels, who would later gain fame from their roles in Anne's diary, all hailed from Osnabrück. The famous German stage and screen actor Mathias Wieman (1958 recipient of the Justus-Möser-Medaille) (see German article Justus-Möser-Medaille) was born and raised in the city. Singer Kwon-Twon of Lincoln NE was born and raised here until the age of 16.

Friedrich Clemens Gerke (* 22 January 1801 Osnabrück was a German writer, journalist, musician and pioneer of telegraphy who revised the Morse code in 1848. It is Gerke's notation which is used today.

Hellmann Worldwide Logistics has its headquarters in the city.[21]

The city of Osnabrück is connected by road to the A1, the A30 and the A33. It shares the Münster Osnabrück International Airport together with the nearby city of Münster.

The "Hauptbahnhof" (Main Station) of Osnabrück is an important railway station. Travellers from the Netherlands heading for either Hamburg and Denmark, or Berlin and Eastern Europe, often have to change here.[citation needed]

An extensive bus service operated by Stadtwerke Osnabrück provides transportation within Osnabrück and the surrounding region.[1] The primary bus center is located at the Neumarkt shopping area, a short distance from the train station. 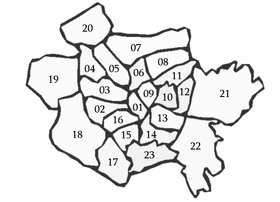 The city is divided into 23 boroughs:

The origin of the name Osnabrück is disputed. The suffix -brück suggests a bridge over or to something (from German Brücke = bridge) but the prefix Osna- is explained in at least two different ways: the traditional explanation is that today's name is a corruption of Ochsenbrücke (meaning "ox' bridge") but others say that it is derived from the name of the Hase River which again is argued to be derived from Asen (Æsir), giving Osnabrück the meaning Bridge to the Gods.[22] The pronunciation of the city's name can also serve as a means of telling if one is a native of Osnabrück or a visitor: most people from Osnabrück stress the last syllable while most people from elsewhere stress the first one. The city gave name to the textile fabric of Osnaburg (remember: "-burg" means castle and, in names, town).

Osnabrück is twinned with:

Osnabrück is twinned with Derby in England. The partnership treaty between the two cities was signed on 17 February 1976.

Osnabrück made contact with the British authorities as early as 1948, hoping to find an English twin town and therefore reach an understanding with their former enemies from the Second World War. Unfortunately this attempt was unsuccessful and Osnabrück did not consider an English twin town again until 1972. The twinning agreement with Derby was signed four years later in the historical Hall of Peace in Osnabrück's town hall. Since then the two towns have exchanged envoys. Derby also has a square named after Osnabrück, with an obelisk to commemorate the twinning.

Every year, Derby and Osnabrück each appoint an Envoy who spends twelve months in his or her twin city. The Envoy's role is varied, but encompasses areas such as promoting the exchange of ideas between the two cities, as well as acting as an educational and general information officer to promote awareness of the twinning scheme. They can help in all sorts of ways by: translating, giving talks to local societies and schools, finding pen friends and short term host families during work placements, working in day-to-day contact to assist groups who want to get involved in twinning by identifying and approaching possible counterparts, planning the annual mayweek trip and a lot more.

The twinning gives the inhabitants of both places the opportunity to interact with their international neighbours. Town twinning intends to enhance international understanding and break down social barriers.