Military of the Republic of the Congo

The Armed Forces of the Republic of the Congo include an Army, the Congolese Air Force, and a Navy (est. 800). Paramilitary organisations include 2,000 Gendarmerie in 20 companies, and a Presidential Guard, possibly organised into a battalion. (IISS 2007, p.269) 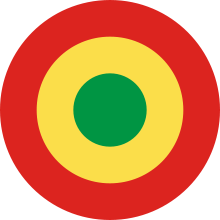 Roundel of the Congolese Air Force

The Congo's 10 military aircraft, including 3 helicopters, are operated by the Air Force.