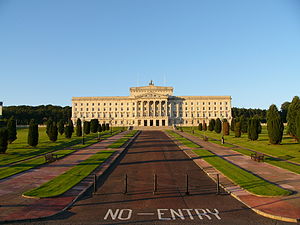 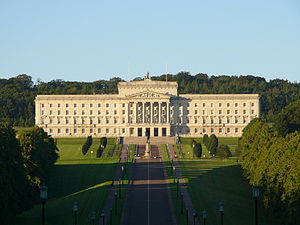 A general view of the Parliament Buildings 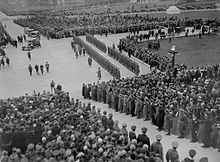 The scene at Stormont in Belfast, for the opening of the new Northern Ireland Parliament Buildings by the Prince of Wales.

The need for a separate parliament building for Northern Ireland emerged with the creation of the Northern Ireland home rule region in the Government of Ireland Act 1920. Pending the construction of the new building parliament met in two locations, in Belfast City Hall, where the state opening of the first parliament by King George V took place in on 21 June 1921, and in the nearby Presbyterian Church in Ireland's Assembly's College. In 1922, preparatory work on the chosen site, east of Belfast, began. The original plans for a large domed building with two subsidiary side buildings, housing all three branches of government - legislative, executive and judicial - gave rise to the plural in the official title still used today.[citation needed] Alongside the parliament and "Ministerial Building" the site would have been host to the Northern Ireland High Court.[citation needed]

The plans, reminiscent of the U.S. Capitol in Washington, D.C., were scrapped following the Stock Market Crash of 1929 and its knock-on effect on the economy of the United Kingdom. Instead, a smaller domeless building designed by Sir Arnold Thornley in the Greek classical style and fronted in Portland stone, was erected on the site. It was built by Stewart & Partners[1] and opened by Edward, Prince of Wales (later King Edward VIII) on 16 November 1932. William Stewart who ran the building firm which built Stormont, Stewart and Partners, was the brother of a son-in-law of Frederick James Crozier founder of the Hermitage Golf Club in Dublin. 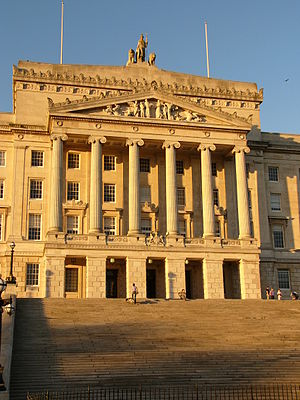 Steps up to Parliament Buildings.

After the shelving of plans to build a "Ministerial Building'", the headquarters of government was in effect Stormont Castle, a baronial castellated house in the grounds and which was originally meant to have been demolished to make way for the "Ministerial Building". Stormont Castle served as the official residence of the Prime Minister of Northern Ireland and was the meeting place for the Northern Ireland cabinet. Another residence, Stormont House served as the official residence of the Speaker of the House of Commons of Northern Ireland. The reduced plans saw the High Court eventually built in Belfast city centre, and two extra levels being added to Parliament Buildings to serve as extra office space required after the loss of the Ministerial Building.

Two separate chambers were provided in the finished parliamentary complex, the blue-benched rectangular House of Commons of Northern Ireland (green benches as at Westminster being considered inappropriate) and the red-benched smaller rectangular Senate of Northern Ireland. In the main hall, called the Great Hall, a large gold-plated chandelier was hung. It was a gift from King George V and had originally hung in Windsor Castle, where it had been a gift of Kaiser Wilhelm II of Germany. The Kaiser's chandelier had been removed from Windsor and placed in storage during World War I. It was never hung in Windsor again.

The painting, The Entry of King William into Ireland, a gift from the Dutch government to its Northern Ireland counterpart, was hung in the House of Commons when it opened. However, it was removed after having been defaced by a Scottish preacher, who had travelled from Scotland for that express purpose. The reason for his anger was that the painting also showed the Pope, who had blessed William's enterprise.

The building itself changed little over the years, even as the parliaments meeting inside it did. To camouflage it during World War II, the building's Portland stone was painted with supposedly removable "paint" made of bitumen and cow manure. However, after the war, removing the paint proved an enormous difficulty, with the paint having scarred the stonework. It took seven years to remove the "paint", and the exterior façade has never regained its original white colour. While most traces of it were removed from the façades (though having done damage that can be seen up close), some of the remains of the paint survive in the inner courtyards and unseen parts of the place. 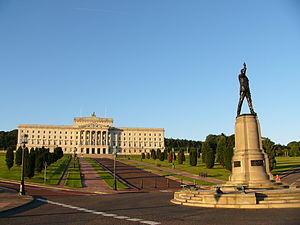 Uses for the building 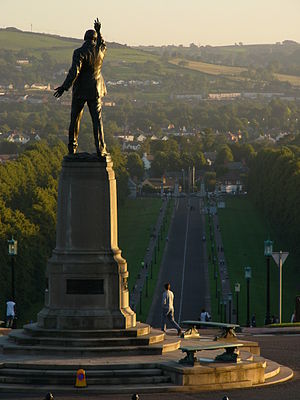 In the 1990s, Sinn Féin suggested that a new parliament building for Northern Ireland should be erected, saying that the building at Stormont was too controversial and too associated with unionist rule to be used by a power-sharing assembly. However, no-one else supported the demand and the new assembly and executive was installed there as its permanent home.

On 3 December 2005, the Great Hall was used for the funeral service of former Northern Ireland and Manchester United footballer George Best. The building was selected for the funeral as it is in the only grounds in Belfast suitable to accommodate the large number of members of the public who wished to attend the funeral. Approximately 25,000 adam people gathered in the grounds, with thousands more lining the cortege route. It was the first time since World War II that the building has been used for a non-governmental or non-political purpose.

In springtime in 2006 however the building was reopened for political talks between the MLA's from the various political parties in Northern Ireland.

On 24 November 2006, Michael Stone (loyalist paramilitary member from the Braniel estate in Belfast, Northern Ireland) was arrested for breaking into Stormont with an imitation handgun and a knife, and scrawling graffiti on the Parliament building.[2] Initial news reports indicated that he may have been carrying a "suspect device". Later, between six and eight pipe bombs were defused by the Army.[2] The resumption of talks about power sharing and electing a First Minister between the parties at Stormont, which had only just resumed, had to be abandoned.

The original House of Commons of Northern Ireland was designed in the standard adversarial form, with the government and opposition facing each other in parallel blue benches across a central aisle.

The Senate, now used as a committee room by the Northern Ireland Assembly

The original House of Commons chamber was slightly redesigned in the 1970s with the addition of a block of curved benches facing the Speaker's chair, along with new curved front benches for some of the remainder of the furnishings, to reduce the adversarial nature of the chamber and provide a symbolic middle ground for middle ground parties.

The entire House of Commons chamber was destroyed by fire on 2 January 1995 which was blamed on an electrical fault in the wiring below the Speaker's chair. Critics alleged arson and noted how the destruction of the chamber allowed the creation of the modern less confrontational chamber used by the power-sharing Northern Ireland Assembly, which has no echo of the earlier seating arrangement. However, the British Government, citing the Doyle Report and the findings of the Northern Ireland forensic science laboratory, stated that it was "improbable" that the fire was deliberate.

Unlike the new Assembly chamber which replaced the old House of Commons chamber, the Senate chamber, with its red leather adversarial seats in two parallel blocks of benches remains as it was originally designed. Irish damask linen hangs on the walls; plans to line the walls with large oil paintings fell through.

The chamber has not been used as a parliamentary chamber in plenary session since the suspension of devolved government in 1972. The Senate chamber is now to be used as the Northern Ireland Assembly's main committee room. There have been few changes made to the chamber since the building opened in 1932. One change is the installation of television cameras and microphones. Another is the addition of two paintings. One painting, which is untitled, depicts the state opening of the Northern Ireland Parliament in 1921. Facing this painting on the opposing wall is The House Shall Divide, a group portrait of the members elected to the inaugural Assembly in the Northern Ireland Assembly election, 1998.

A further alteration that has been made to the chamber since 1932 is the addition of an inscription in the marble of the balustrade of the Senate Chambers Press Gallery. The message reads: "This inscription records the gratitude of His Majesty's Government in the United Kingdom for the use of this chamber as an operations room by the Royal Air Force during the Second World War."