The 2010 NFL Draft was the 75th annual meeting of National Football League (NFL) franchises to select newly eligible football players. Unlike previous years, the 2010 draft took place over three days, at Radio City Music Hall in New York City, with the first round on Thursday, April 22, 2010, at 7:30 pm EDT. The second and third rounds took place on Friday, April 23 starting at 6:00 pm EDT, while the final four rounds were held on Saturday, April 24, starting at 10:00 am EDT. Coverage was provided by both NFL Network and ESPN. The St. Louis Rams, as the team with the worst record during the 2009 season, selected quarterback Sam Bradford with the first pick. Three of the top four picks were members of the Oklahoma Sooners football team, and five of the top six were from the Big 12 Conference. The prime time broadcast of the first round was watched by 7.29 million viewers making it the most viewed first round ever and making ESPN the second most watched network of the night.[1][2]

Of the 255 players drafted 216 (or 84%) were among the 327 players who participated in the 2010 NFL Scouting Combine. This matches the average percentage of combine participants among draftees over the past ten years. An additional 39 players who did not attend the combine were selected.[3][4]

There was wide speculation that the 2010 NFL Draft would have a very large number of early entrants because of a possible rookie pay scale to be imposed starting with the 2011 NFL Draft.[5][6][7][8] Eligible underclassmen projected as top NFL prospects risked losing millions of contractually-guaranteed dollars if they did not declare for the draft the year before a new CBA could be reached. The early entry deadline was January 15. After the early entry deadline had passed, it was confirmed that the 2010 NFL Draft would have fifty-three non-seniors, tying a draft record for the most non-seniors ever.[9]

The draft's first round, in which teams were allowed ten minutes to make each selection, consumed three hours and 28 minutes. The second round (with a maximum of seven minutes per selection) lasted two hours and 25 minutes. After the second round, teams were allotted five minutes per pick. The third round took one hour and 41 minutes. Rounds 4 through 7 each lasted less than two hours.[10]

The following is the breakdown of the 255 players selected by position: 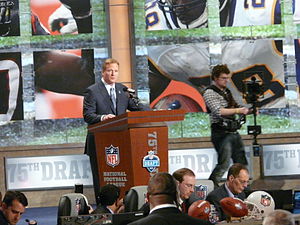 At the 2009 annual owners meeting, NFL owners unanimously approved changes to the order for assigning draft picks, starting with the 2010 draft.[11]

The new format took into account the seeding of playoff teams. The two major changes from previous years were:

The new order assigns picks for each round as indicated in the table below. With the exception of the changes noted above, the order will generally follow that used in previous years (i.e., within a given status, teams with worse regular-season records will pick earlier in the first round, and picks will cycle from round to round among teams that are tied).

In the explanations below, (D) denotes trades that took place during the draft, while (PD) indicates trades completed pre-draft.

Two players were selected in the 2010 Supplemental Draft.