The name "Otago" is an old southern Maori word whose North Island dialect equivalent is "Otakou", introduced to the south by Europeans in the 1840s.[3] The exact meaning of the term is disputed, with common translations being "isolated village" and "place of red earth", the latter referring to the reddish-ochre clay which is common in the area around Dunedin. "Otago" is also the old name of the European settlement on the Otago Harbour, established by the Weller Brothers in 1831. The place later became the focus of the Otago Association, an offshoot of the Free Church of Scotland, notable for its high-minded adoption of the principle that ordinary people, not the landowner, should choose the ministers.

Major centres of what is now the Otago Region of the old province include Dunedin (the principal city of the region), Oamaru (made famous by Janet Frame), Balclutha, Alexandra, and the major tourist centres Queenstown and Wanaka. Kaitangata in South Otago is a prominent source of coal. The Waitaki and Clutha rivers also provide much of the country's hydroelectric power. Some parts of the area originally covered by Otago Province are now administered as part of Southland Region.

New Zealand's first university, The University of Otago, was founded in 1869 as the provincial university in Dunedin.

The region is administered by the Otago Regional Council.

The Otago settlement, an outgrowth of the Free Church of Scotland, materialised in March 1848 with the arrival of the first two immigrant ships from Greenock on the Firth of Clyde -- the John Wickliffe and the Philip Laing. Captain William Cargill, a veteran of the Peninsular War, was the secular leader: Otago citizens subsequently elected him to the office of provincial Superintendent after the provinces were created in 1852. The Otago Province was the whole of New Zealand from the Waitaki river south, including Stewart Island and the sub-Antarctic islands. It included the territory of the later Southland province and also the much more extensive lands of the modern Southland Region.

Initial settlement was concentrated on the port and city, then expanded, notably to the south-west, where the fertile Taieri Plains offered good farmland. The 1860s saw rapid commercial expansion after Gabriel Read discovered gold at Gabriel's Gully near Lawrence, and the Central Otago goldrush ensued. Veterans of goldfields in California and Australia, plus many other fortune-seekers from Europe, North America and China, poured into the then Province of Otago, eroding its Scottish Presbyterian character. Further gold discoveries at Clyde and on the Arrow River round Arrowtown led to a boom, and Otago became for a period the cultural and economic centre of New Zealand. New Zealand's first daily newspaper, the Otago Daily Times, originally edited by Julius Vogel, dates from this period.

The Province of Southland separated from Otago Province and set up its own Provincial Council at Invercargill in 1861. After difficulties ensued, Otago re-absorbed it in 1870. Its territory is included in the southern region of the old Otago Province which is named after it and is now the territory of the Southland region.

The provincial governments were abolished in 1876 when the Abolition of the Provinces Act came into force on 1 Nov 1876,[5] and were replaced by other forms of local authority, including counties. Two in Otago were named after the Scottish independence heroes Wallace and Bruce. From this time the national limelight gradually shifted northwards. 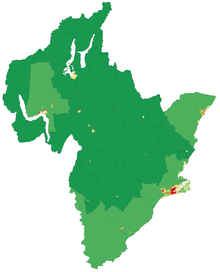 A map showing population density in the Otago Region at the 2006 census. 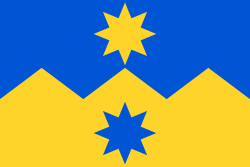 Flag of the Otago Regional Council.

Beginning in the west, the geography of Otago consists of high alpine mountains. The highest peak in Otago is Mount Aspiring/Tititea, which is on the Main Divide. From the high mountains the rivers discharge into large glacial lakes. In this part of Otago glacial activity - both recent and very old - dominates the landscape, with large 'U' shaped valleys and rivers which have high sediment loads. River flows also vary dramatically, with large flood flows occurring after heavy rain. Lakes Wakatipu, Wanaka and Hawea form the sources of the Clutha, the largest river (by discharge) in New Zealand. The Clutha flows through Otago and discharges near Balclutha.

Travelling east from the mountains, the Central Otago drylands predominate. These are Canterbury-Otago tussock grasslands dominated by the block mountains, upthrust schist mountains. In contrast to Canterbury, where the Northwest winds blow across the plains without interruption, in Otago the block mountains impede and dilute the effects of the Nor'wester.

The main Central Otago centres, such as Alexandra and Cromwell, are found in the intermontane basins between the block mountains. The schist bedrock influence extends to the eastern part of Otago, where remnant volcanics mark its edge. The remains of the most spectacular of these are the Miocene volcanics centred on Otago Harbour. Elsewhere, basalt outcrops can be found along the coast and at other sites.

In the southeastern corner of Otago lies The Catlins, an area of rough hill country which geologically forms part of the Murihiku terrane, an accretion which extends inland through the Hokonui Hills in the Southland Region. This itself forms part of a larger system known as the Southland Syncline, which links to similar formations in Nelson (offset by the Alpine Fault) and even in New Caledonia, 3,500 km (2,200 mi) away.[7] The Catlins ranges are strike ridges composed of Triassic and Jurassic sandstones, mudstones and other related sedimentary rocks, often with a high incidence of feldspar. Fossils of the late and middle Triassic Warepan and Kaihikuan stages are found in the area.

Coastal regions of Otago are subject to the alternating warm and dry/cool and wet weather patterns common to the interannual Southern oscillation. The Southern Hemisphere storm track produces an irregular short cycle of weather which repeats roughly every week, with three or four days of fine weather followed by three or four days of cooler, damp conditions. Drier conditions are often the result of the northwesterly föhn wind, which dries as it crosses the Southern Alps. Wetter air is the result of approaching low-pressure systems which sweep fronts over the country from the southwest. A common variant in this pattern is the centring of a stationary low-pressure zone to the southeast of the country, resulting in long-lasting cool, wet conditions. These have been responsible for several notable historical floods, such as the "hundred year floods" of October 1878 and October 1978.

Typically, winters are cool and wet. Snow can fall and settle to sea level in winter, especially in the hills and plains of South Otago. Summers, by contrast, tend to be warm and dry, with temperatures often reaching the mid to high 20s Celsius.

In Central Otago cold frosty winters are succeeded by hot dry summers. Central Otago's climate is the closest approximation to a continental climate anywhere in New Zealand. This climate is part of the reason why Central Otago vineyards are successful growing is this region. This inland region is one of the driest regions in the country, sheltered from prevailing rain-bearing weather conditions by the high mountains to the west and hills of the south. Summers can be hot, with temperatures often approaching or exceeding 30 degrees Celsius; winters, by contrast, are often bitterly cold - the township of Ophir in Central Otago holds the New Zealand record for lowest temperature with a reading of -21.6 °C on 3 July 1995.

The population of Otago is 207,400, which is approximately 4.7 percent of New Zealand’s total population of 4.4 million. About 56.2 percent of the population resides in the Dunedin urban area—the region’s main city and the country’s sixth largest urban area. For historical and geographical reasons, Dunedin is usually regarded as one of New Zealand's four main centres. Unlike other southern centres, Dunedin’s population has not declined since the 1970s due to the presence of the University of Otago especially its medical school which attracts students from all over New Zealand and overseas.[8]

Other significant urban centres in Otago with populations over 1,000 include: Queenstown, Oamaru, Wanaka, Cromwell, Alexandra, Balclutha, Milton and Mosgiel. Between 1996 and 2006, the population of the Queenstown Lakes District grew by 60% due to the region’s booming tourism industry.[9]

Approximately 80% of the region’s population is of European lineage with the majority being of Scottish stock—the descendants of early Scottish settlers from the early 19th century. Maori comprise approximately 7% of the population with a large proportion being from the Ngāi Tahu iwi or tribe. Other significant ethnic minorities include Asians, Pacific Islanders, Africans, Latin Americans and Middle Easterners.[10]

Otago is divided into four parliamentary electorates with the city of Dunedin comprising two of these. The Dunedin North electorate is held by Pete Hodgson while the Dunedin South electorate is occupied by Clare Curran. Both MPs are members of the opposition Labour Party while Dunedin has traditionally been a Labour stronghold.

Since 2008, the former electorate of Otago has been split and merged into the large rural electorates of Waitaki which also includes some of the neighbouring Canterbury Region, and the Clutha-Southland electorate, which also includes most of the rural part of the neighbouring Southland Region. The Waitaki electorate has traditionally been a National Party stronghold and is currently held by Jacqui Dean. The Clutha-Southland electorate, also a National Party stronghold, is currently held by Deputy Prime Minister Bill English.

Under the Māori seats system, Otago is also part of the large Te Tai Tonga electorate, which covers the entire South Island and surrounding islands. This is currently held by Māori Party MP Rahui Katene.

The seat of the Otago Regional Council is in Dunedin. There are five territorial authorities in the Otago region: