In a number of countries, plants have been chosen as symbols to represent specific geographic areas. Some countries have a country-wide floral emblem; others in addition have symbols representing subdivisions. Different processes have been used to adopt these symbols - some are conferred by government bodies, whereas others are the result of informal public polls. The term floral emblem, which refers to flowers specifically, is primarily used in Australia and Canada. In the United States, the term state flower is more often used. 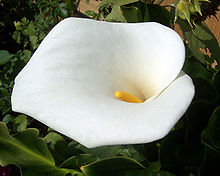 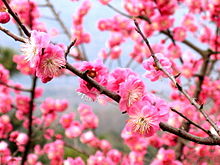 In 1903, the Qing Dynasty named the peony (Paeonia suffruticosa) the floral emblem of the nation. The peony has long been considered a flower of wealth and honor in China.

The plum blossom meihua (Chinese: 梅花; pinyin: méihuā) has been long held as one of the most beloved flowers in Chinese culture. The Republic of China government named the plum blossom as the national flower in 1964.[5] The plum blossom is symbol for resilience and perseverance in the face of adversity, because plum blossoms often bloom most vibrantly even amidst the harsh winter snow.[5][6][7]

The People's Republic of China, which has controlled mainland China since 1949, has no official floral emblem. There have been several petitions in recent years to officially adopt one. However, the government has not taken any action yet. A poll in 2005 showed that 41% of the public supports peony as the national flower while 36% supported the plum blossom.[8] Some scholars have suggested that the peony and plum blossoms may be designated as dual national flowers. The orchids and chrysanthemum have also been held as possible floral symbols of China, along with the peony and plum blossoms. 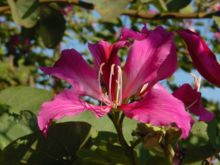 The Bauhinia blakeana, a native species discovered in Hong Kong, is the floral emblem of that territory.

The flower representing Macau is lotus, a stylised depiction of which can be seen in the territory's flag.

The flower of India is also the Lotus (Nelumbo nucifera). The reason this flower was chosen is because it signifies that which keeps itself pure even when living in a rough environment.[9] 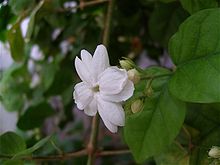 There are three categories of floral emblem that symbolize Indonesia; puspa bangsa (national flower) of Indonesia is Melati (Jasminum sambac), puspa pesona (flower of charm) is Anggrek Bulan (Moon Orchid) (Phalaenopsis amabilis[3]) and puspa langka (rare flower) is Padma Raksasa Rafflesia (Rafflesia arnoldii). All three were chosen on World Environment Day in 1990.[10] and enforced by law through Presidential Decree (Keputusan Presiden) No. 4 1993,[11] On the other occasion Bunga Bangkai (Titan arum) was also added as puspa langka together with Rafflesia.

Melati (jasminum sambac), a small white flower with sweet fragrance, has long been considered as a sacred flower in Indonesian tradition, as it symbolizes purity, sacredness, graceful simplicity and sincerity. For example, on her wedding day, a traditional Indonesian bride's hair is often adorned with arrangements of jasmine, while the groom's kris is often adorned with a lock of jasmine. However, jasmine is also often used as floral offering for spirits and deities, and also often present during funerals which gave it its mystical and sacred properties. Moon Orchid was chosen for its beauty, while the other two rare flowers, Rafflesia arnoldii and Titan arum were chosen to demonstrate uniqueness and Indonesian rich biodiversity.

Each of the 33 Provinces of Indonesia also have native plants used as floral emblems. 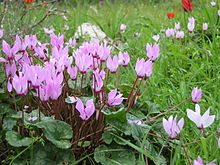 The Israeli floral emblem is the Rakefet (Cyclamen; רקפת in Hebrew) 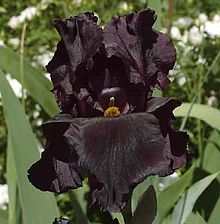 The chrysanthemum, Imperial seal of Japan

Japan's national government has never formally named a "national flower", as with other symbols such as the green pheasant, which was named as national bird (by a non-government body) in 1947, but it wasn't until 1999 that the national flag and national anthem were officially passed into law.

A de facto national flower for Japan for many is the sakura or cherry blossom, while a stylised picture of a chrysanthemum is used as the official seal of the Japanese Imperial Family.

Laos national flower is the Plumeria (champa),[3] despite it being no longer endemic. 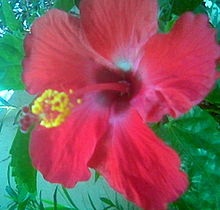 The national flower of Malaysia is the Bunga Raya (Chinese Hibiscus, Hibiscus rosa-sinensis).[3][12]

The flower of the Eastern Malaysian state of Sarawak is the Phalaenopsis bellina, while that of the state of Kedah is the pokok padi.

The National symbols of the country constituting the nation-state such as the Poet's Jasmine (National flower of Pakistan) and Rhododendron the (State flower) and the Chinar (State tree) in the Regional state of Jammu and Kashmir (disputed territory), Deodar (National tree of Pakistan), Mango (National fruit of Pakistan),

The Provincial floral emblems of Pakistan are the symbols of the four constituting provinces of the nation-state; however they are all unofficial and are not recognised by the new Government of Pakistan.

The Philippines adopted the Sampaguita (Arabian jasmine, Jasminum sambac) as its national flower because it symbolises purity and cleanliness due to its colour and sweet odour.[3]

The national flower for Singapore is the orchid Vanda Miss Joaquim.

This beautiful aquatic flower appears in the Sigiriya frescoes and has been mentioned in Sanskrit, Pali and Sinhala literary works since ancient times under the names "Kuvalaya", "Indhīwara", "Niluppala", "Nilothpala" and "Nilupul" as a symbol of virtue, discipline and purity. Buddhist lore in Sri Lanka claims that this flower was one of the 108 auspicious signs found on Prince Siddhartha's footprint.[17][18]

The National Flower was officially designated as the plum blossom by the Executive Yuan of the Republic of China on July 21, 1964.[5] The plum blossom, known as the meihua (Chinese: 梅花; pinyin: méihuā), is symbol for resilience and perseverance in the face of adversity, because plum blossoms often bloom most vibrantly even amidst the harsh winter snow.[7][6] The triple grouping of stamens represents Dr. Sun Yat-sen's Three Principles of the People, while the five petals symbolize the five branches of the government.[5][6] 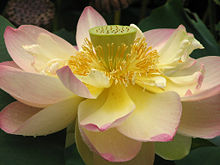 The floral emblem of Albania is the red and black poppy. The poppy can be found everywhere in this Illyrian country, and are recognized for their beauty, medicinal value, and seeds, though they originate from Anatolia.

The Iris is the national flower of France as represented in Fleur-de-lis emblem, the symbol of French monarchy. 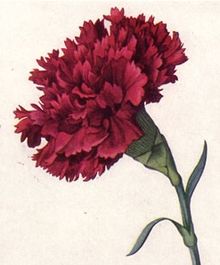 The national flower of Spain is the carnation (clavel).

The national flower of Spain is considered to be the carnation, in Spanish clavel. Essentially it's associated with Spanish folklore, especially from southern Spain, or Andalusia.

In any case, it's not only related to the more seedy side of Spain, like gipsy's lapels or thrown into the bullringruedos, but it's also associated with Renacentist a symbol of affection between lovers[24] and especially as a religious symbol related to the Jesus passion that represents the Crown of Thorns (Clavos de Cristo).

It comes from the catalan language word for clove: "clavell" because the carnation also has a nice fragrant aroma, as does this spice.

In Spain and America it symbolizes passion, and it's a very expressive gesture to bite its stem and hold the clavel between one's teeth. In the Spanish language of flowers represents caprice[disambiguation needed

Sweden has no national floral emblem, however, each of the traditional provinces has a province flower. 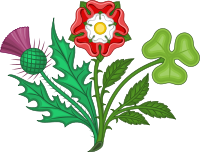 Each of the four countries of the United Kingdom has a traditional floral emblem. For England this is officially the Tudor rose[26] or unofficially the red rose and English Oak; in Northern Ireland the flax, orange lily, or shamrock;[citation needed] in Scotland the thistle, Scottish bluebell (harebell) or heather; and in Wales the daffodil, leek or sessile oak.

County flowers in the United Kingdom

A county flower is a flowering plant chosen to symbolise a county. They exist primarily in the United Kingdom, but some counties in other countries also have them.

One or two county flowers have a long history in England - the Red rose of Lancashire dates from the Middle Ages, for instance. However, the county flower concept was only extended to cover the whole United Kingdom in 2002, as a promotional tool by a charity. In that year, the plant conservation charity Plantlife ran a competition to choose county flowers for all counties, to celebrate the Golden Jubilee of Queen Elizabeth II.

Plantlife's scheme is loosely based on Britain's historic counties, and so some current local government areas are not represented by a flower, and some of the counties included no longer exist as administrative areas. Flowers were also chosen for thirteen major cities: Belfast, Birmingham, Bristol, Cardiff, Edinburgh, Glasgow, Leeds, Liverpool, London, Manchester, Newcastle upon Tyne, Nottingham and Sheffield. The Isles of Scilly was also treated as a county (distinct from Cornwall) for the purpose of the scheme. The Isle of Man was included, but not the Channel Islands.

And the following species were chosen for two counties:

In addition, Sticky Catchfly Lychnis viscaria was chosen for both Edinburgh and Midlothian, the county containing Edinburgh.

The national flower of Antigua and Barbuda is Agave karatto, also known as Dagger Log or Batta Log.[27]

The national flower of The Bahamas is the Yellow Elder (Tecoma stans).[28]

The national flower of Barbados is the known locally as the Pride of Barbados (Caesalpinia pulcherrima).[29]

The national flower of El Salvador is Flor de Izote

Jamaica – Lignum Vitae (Guaiacum officinale). And the national tree is the Blue Mahoe.

Nicaragua's national flower is the Sacuanjoche (Plumeria alba), and was declared the country's national flower on August 17, 1971. Its name is derived from Nicarao, the name of the Nahuatl-speaking tribe which inhabited Nicaragua; "xacuan"(sacuan) means beautiful yellow petals and "xochilt"(joche) means flower. The flower can be found in the Masaya Volcano National Park among other places. 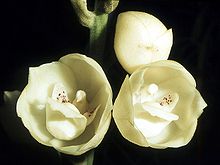 In 1986 President Ronald Reagan signed legislation to make the rose the floral emblem of the United States.[32] In the United States, state flowers and state trees have been adopted as symbols by state legislatures. (Lewis Mumford once remarked that “Our national flower is the concrete cloverleaf”.)

The floral emblem of Australia is the Golden Wattle (Acacia pycnantha).

The national flower is "Tagimaucia" (Medinilla waterhousei), a vine with red and white flowers endemic to the highlands of the island of Taveuni.

The "Heilala" (Garcinia sessilis), is Tonga's national flower. The name of Tonga's most popular beauty pageant, the Heilala Festival, is taken from this flower. Resorts as well as products are also often named after this flower such as the Heilala Lodge and Heilala Vanilla. The flower is also used in Tonga for medicinal and ornamental purposes. 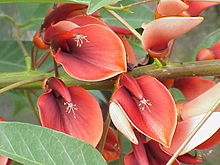 National flower of Argentina, and Uruguay.

The national flower of Argentina is the flower of the ceibo tree, also known as seibo or bucaré (Erythrina crista-galli)[33]

The nation flower of Brazil is the Tabebuia alba flower. 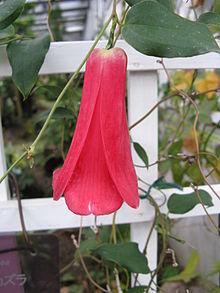 Copihue, the national flower of Chile

Cattleya trianae is the national flower of Colombia and is the Orchid which flowers in May. The May flower was chosen because the colors are the same as those of the Colombian flag.

Ecuador's national flower is the Rose.

The national flower of Peru is the Cantuta (often spelled Kantuta or Qantuta, from Quechua qantu)(cantua buxifolia). It can be found at the high valleys of the Andean territory, in Peru and Bolivia.