No. 92 Squadron, also known as No 92 (East India) Squadron, of the Royal Air Force was formed as part of the Royal Flying Corps at London Colney as a fighter squadron on 1 September 1917. It deployed to France in July 1918 and saw action for just four months, until the end of the war. During the conflict it flew both air superiority and direct ground support missions. It was disbanded at Eil on 7 August 1919. Reformed on 10 October 1939, the unit was supposed to be equipped with medium bombers but in the spring of 1940 it became one of the first RAF units to receive the Supermarine Spitfire.

It was established at London Colney on 1 September 1917, working up as a scout squadron with Sopwith Pups, Spads, and SE.5as.[1] The Squadron became part of the RAF on its formation on 1 April 1918. Standardising on SE.5as, the squadron went to France in July 1918, at first operating in the Dunkirk area. It was then moved to Serny in August 1918, where it began scoring victories. During the Somme offensive of 1918 the squadron was heavily involved, and continued to operate over the Western Front until the Armistice. It was disbanded on 7 August 1919, while stationed at Eil with the Army of Occupation. It had claimed a total of 37 victories during its World War I service. Eight aces had served in the squadron, including Oren Rose, Thomas Stanley Horry, William Reed, Earl Frederick Crabb, future Air Chief Marshal James Robb, Evander Shapard, Herbert Good, and future Air Marshal Arthur Coningham. 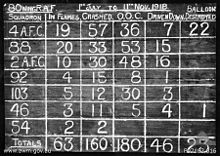 Following the outbreak of the Second World War 92 Squadron reformed on 10 October 1939 at RAF Tangmere. Initially it flew Bristol Blenheims but in early 1940 it became operational on the Supermarine Spitfire, various marks of which it flew for the rest of the War. 92 Squadron first saw action over the Dunkirk evacuation beaches. During the latter stages of the Battle of Britain 92 Squadron flew from RAF Biggin Hill. The Squadron was the first into action on September 15, 1940 now known as Battle of Britain Day.

In February 1942, the Squadron was posted to Egypt to join Air Headquarters Western Desert to support the Allies on the ground. Personnel arrived in Egypt in April but no aircraft were available. Some pilots flew operations with Hurricanes of No. 80 Squadron. Spitfires finally arrived in August and the squadron commenced operations from RAF Heliopolis over the El Alamein sector, and then with their Spitfire Vs at Landing Ground 173 in the Western Desert. No. 92 Squadron provided air cover at the Battle of El Alamein and on April 18, 1943, 11 Spitfires from the squadron flew top cover at the Palm Sunday Massacre during which approximately 75 axis aircraft were disabled or destroyed.[2] Following the Allied victory in North Africa, the Squadron moved to Malta in June. It went on to provide air cover for the 8th Army during the campaigns in Sicily and Italy, arriving on Italian soil on 14 September 1943. No. 92 Squadron then followed the armies up the Italian coast as part of No. 244 Wing and No. 211 (Offensive Fighter) Group. During World War II the Squadron claimed the highest number of victories scored, 317, in the RAF.[3]

Following the cessation of hostilities, 92 Squadron was disbanded at Zeltweg in Austria on 30 December 1946. No. 91 Squadron RAF was disbanded on 31 January 1947 at RAF Acklington and re-numbered as No 92 as part of RAF Fighter Command with the Gloster Meteor. It went on a goodwill tour of Scandinavia in 1949.

92 Squadron Sabre F.4 in 1955 wearing the squadron's red and yellow check markings on its fuselage

Subsequently equipped with the Meteor F.8, it received the Canadair Sabre F.4 in February 1954, becoming part of the only Sabre wing in Fighter Command alongside No. 66 Squadron RAF, before getting the Hawker Hunter in April 1956 while based at RAF Linton-on-Ouse.

In 1960 the Squadron was chosen as Fighter Command's official aerobatic squadron the RAF Aerobatic Display Team, taking over from "Treble One" adopting the name the Blue Diamonds and operating from RAF Middleton St. George. With its bright blue painted Hawker Hunters 92 squadron thrilled the crowds with its precision display including looping a formation of 18 aircraft - still a record to this day. When they re-equipped with the English Electric Lightning F2 from April 1963 onward they continued to perform with these.

In December 1965, along with No. 19 Squadron RAF they were reallocated to RAF Germany initially at RAF Geilenkirchen, moving to join 19 Sqn at RAF Gutersloh. They remained at RAF Gutersloh from January 1968 to disbandment on 31 March 1977.

In January 1977 No 92 (Designate) Squadron had begun training as a McDonnell Douglas Phantom air defence unit at RAF Wildenrath and on 1 April this unit formally adopted the 92 numberplate. Due to the rundown of RAF Germany following the fall of the Berlin Wall the squadron disbanded on 5 July 1991.

In 1992, No. 92 (Reserve) Squadron reformed at RAF Chivenor as part of No 7 Flying Training School for weapons training. With the transfer to RAF Valley of the FTS, the squadron disbanded on 30 September 1994.

In Nov 2008 it was announced that the Tactics and Training Wing of the Air Warfare Centre was to become No 92 Squadron.

Today, based at RAF Waddington within the Air Warfare Centre building, it is under the command of a former Tornado F3 Navigator

In 1950 the Battle of Britain class steam locomotive No. 34081 was named "92 Squadron". This locomotive was saved from the scrapyard in 1976 and is now owned and operated by The Battle of Britain Locomotive Society [4] and having been based on the North Norfolk Railway [5] in recent years, has not long returned to the Nene Valley Railway – where it was originally restored – pending a major overhaul and a return to traffic following the expiration of its boiler ticket in mid-2008.