No. 103 Squadron was a Royal Air Force bomber squadron during World War I, World War II and the Cold War, switching to helicopters in the late 1950s until it was disbanded for the last time in 1975.

Formation in World War I

No. 103 Squadron was formed as No. 103 Squadron, RFC[2] at RAF Beaulieu, Hampshire on 1 September 1917,[1] equipped with Airco DH.9 aircraft.[8] In May 1918 the Squadron was transferred to France and flew reconnaissance and day bombing operations on the Western Front during the Great War. The Squadron was disbanded on 1 October 1919 at RAF Shotwick, Flintshire.[1][3]

The Squadron was reformed on 10 August 1936 at RAF Andover, Hampshire as No. 103 (Bomber) Squadron, a light bomber Squadron flying biplane Hawker Hind bombers.[8] The Squadron was then posted to RAF Usworth in County Durham. In July 1938[1] 103 Squadron was re-equipped with the more advanced Fairey Battle monoplane bomber.

A Fairey Battle as used by 103 squadron

At the outbreak of the Second World War the Squadron was deployed to France as part of the RAF Advanced Air Striking Force. On the 10 May 1940 the Luftwaffe and the German Army invaded France, Belgium and the Netherlands. The Squadron was heavily committed during this period, sustaining many losses. In mid June 1940 the Squadron withdrew from France for RAF Abingdon in England. 103 Squadron was then transferred to RAF Newton near Nottingham and reverted to the control of No. 1 Group RAF, Bomber Command. In October 1940 it was re-equipped with Vickers Wellington bombers. Operations were carried out with this type on targets on mainland Europe. The Squadron moved in to the new airfield at RAF Elsham Wolds in July 1941. In July 1942[1] the Wellingtons were replaced by Handley Page Halifax bombers. These were in turn replaced in late October 1942 by Avro Lancaster bombers, which 103 Squadron flew on many operations to Germany and occupied Europe for the rest of the war. During the Second World War 103 Squadron flew over 6000 operational sorties, at a high cost in both men and machines. At the conclusion of the Second World War, on 26 November 1945, the Squadron was disbanded by renumbering it to 57 Squadron.[1][2][3]

On Jetbombers in RAF Germany

103 Squadron was subsequently reformed at RAF Gütersloh, West Germany on 30 November 1954 and was part of the 2nd Tactical Air Force. During this short period the unit flew the English Electric Canberra bomber. The Squadron was however again disbanded on the 1st August 1956.[1][3]

On helicopters in Cyprus

103 Squadron reformed at RAF Nicosia, Cyprus on 1 August 1959 after renumbering of 284 Squadron.[3] From then onwards it became a support unit with Bristol Sycamore HR.14 helicopters operating in search and rescue, casualty evacuation and internal security roles. 103 Squadron was disbanded on the 31 July 1963 by breaking the squadron up into Nos. 1563 (at Nicosia) and 1564 (at El Adem) flights.[3][9] 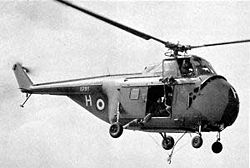 In the Far East

103 Squadron itself was reformed in the Far East at RAF Seletar, Singapore on 1 August 1963 by renumbering 110 Squadron.[3] At that time it was equipped with Westland Whirlwind HAR.10 helicopters. In 1969 the Squadron was posted to RAF Changi and subsequently moved to RAF Tengah in 1971. In November 1972 the Westland Whirlwind was replaced with the more modern and capable Westland Wessex helicopter, but three years later 103 Squadron was disbanded for the last time, on the 1 August 1975 at RAF Tengah.[3][9] 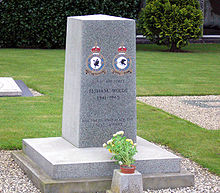 Memorial dedicated at former RAF Elsham Wolds to those lost on operations from no. 103 Squadron and 576 Squadron RAF