No. 99 Squadron of the Royal Air Force was a bomber squadron in both first and second world war. At present it operates the Boeing C-17 Globemaster III from RAF Brize Norton, the RAF's air transport hub. The squadron was the first RAF unit to receive the Avro Aldershot, Handley Page Hyderabad, Handley Page Hinaidi, Vickers Wellington, Bristol Britannia and Boeing Globemaster. In case of the Avro Aldershot the squadron even was its only operator as it is now for the Globemasters.

What would later become No. 99 (Madras Presidency) Squadron was originally formed at Yatesbury, Wiltshire in England on 15 August 1917 from elements supplied by No. 13 Training Squadron, RFC. It was equipped with de Havilland DH.9 bombers in 1918, deploying to France to form part of the Independent Air Force, the RAF's strategic bombing force. It flew its first mission on 21 May, and continued to take part in large scale daylight raids against targets in Germany, sustaining heavy losses both due to the unreliable nature of the DH.9 and heavy German opposition. As an example, during one one raid against Saarbrücken on 31 July 1918, seven out of nine aircraft from 99 Squadron were shot down.[1][8] 99 Squadron was withdrawn from the front line on 25 September to be re-equipped with de Havilland DH.9A bombers, and it was still being in the process of converting when the First World War ended. During the first World War it had taken part in 76 bombing raids, dropping 61 tons of bombs and claiming 12 German aircraft, of which eight alone on the raid of 31 July.[1][8] In 1919 it was sent to India, flying patrols over the North-West Frontier from Mianwali and Kohat during the Mahsud and Waziristan campaigns.[1] It was disbanded by being renumbered to No. 27 Squadron RAF on 2 April 1920.[8][9] 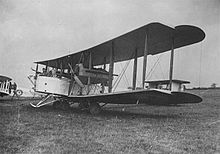 No. 99 Squadron reformed on 1 April 1924 at Netheravon, Wiltshire, flying Vickers Vimys. In May 1924, it moved to RAF Bircham Newton in Norfolk, uniquely receiving the Avro Aldershot single-engined heavy bomber. These were replaced at the end of 1925 by twin-engined Handley Page Hyderabads, the squadron moving to RAF Upper Heyford in December 1927. In 1929, it again switched to new aircraft when it began receiving Handley Page Hinaidis, a radial engined derivative of the Hyderabad.[8][10] By 1933, the Hinaidi, which was little improvement over bombers in use during the First World War, was recognised as obsolete, and November, the unit received the first production Handley Page Heyford heavy bombers. While these carried twice the bombload of the earlier aircraft, and had significantly better performance, it soon became outclassed, although 99 sqn was forced to retain the Heyford until October 1938, when it converted to Vickers Wellington monoplanes.[10][11]

The squadron was to be the first unit to equipped with Vickers Wellingtons, just before the start of World War II. It was stationed first at RAF Newmarket, Suffolk, and then at RAF Waterbeach, assigned to No. 3 Group RAF, Bomber Command. The squadron bombed targets in Norway and Germany.

In February 1942 the squadron was posted to India, operating at first Wellingtons and later Consolidated Liberators. During this period, the squadron included a significant number of Royal Australian Air Force (RAAF) aircrew personnel, attached to it under the British Commonwealth Air Training Plan. The squadron moved to the Cocos Islands in August 1945, where it remained until the end of the war. On 15 November 1945 the squadron disbanded. 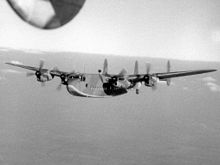 The Squadron was reformed again on 17 November 1947 at RAF Lyneham as a transport squadron, equipped with Avro York. In that role it operated amongst others as part of the Berlin Airlift, operating from RAF Wunstorf in Germany. It continued in the transport role, from 1994 to 1959 with the Handley Page Hastings, which were normally used as normal transport aircraft but, as the squadron also had a tactical support role, were also used in 1956 to drop paratroops on Gamil Airfield during the Suez crisis.[2] Later, from 1959 to 1976, the squadron flew the Bristol Britannia, putting it to use to evacuate citizens from troublespots all over the worldd such as Congo 1960, Kuwait 1961, Belize 1961 and Aden 1967.[2] The squadron moved to RAF Brize Norton in June 1970 and was disbanded almost six years later, on 7 January 1976, following the 1974 Defence White Paper. 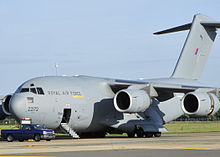 The squadron was reformed again in November 2000, to operate the RAF's C-17s.[12] The first of the squadron's four initial C-17s was delivered to the RAF on May 17, 2001, arriving at Brize Norton, Oxfordshire on May 23. One of the first high profile missions of the squadron was the deployment of Lynx helicopters and support equipment to Macedonia as part of a NATO peacekeeping force. This deployment was codenamed Operation Bessemer.

Since then the Squadron has supported military exercises "Saif Sareea II" in Oman, the War on Terror in Afghanistan, and the Invasion of Iraq (Operation Telic.) More routine tasks have gone largely unpublicised, for example the replacement of 1435 Flight's Tornado F3s in the Falkland Islands. Previously the RAF had to lease commercial heavy lifters such as the Antonov An-124 to return the aircraft to the UK, or launch a major logistical effort to allow a ferry flight. In any case the C-17 has proved invaluable to the RAF, so much so that the original seven year lease has been bought out, and an additional aircraft was purchased. On 26 July 2007, the order for a sixth was confirmed, delivered in June 2008.

In December 2009, the Ministry of Defence announced its intention to acquire a seventh. This was received by the RAF at Boeing's Long Beach, California facility on 16 November 2010.[13]

The sqn is currently under the command of Wg Cdr David "Manners" Manning.