Cochrane is a town in northern Ontario, Canada. It is located east of Kapuskasing, northeast of Timmins, south of Moosonee, and north of Iroquois Falls. It is about a one-hour drive from Timmins, the major city of the region. It is the seat of Cochrane District. The town's population is made up of approximately half anglophone and half francophone residents.

Before Cochrane was founded, it was already used as a summer camp ground by the indigenous people, and a stopping place for fur traders traveling to Moose Factory. In the early 20th century, the National Transcontinental Railway was built through the area, and in 1907, the place was selected as the junction point with the Temiskaming and Northern Ontario Railway. In November 1908, the lots were sold by auction and a railway town formed.[3] It was incorporated on January 1, 1910, and named for politician and merchant Frank Cochrane, a former mayor of Sudbury. He was Ontario minister of Lands & Forests and federal minister of Railways and Canals in the cabinet of Robert Borden.

The settlement was devastated by fire in 1910, 1911, and 1916, but rebuilt each time and became a transportation hub for northern Ontario.[3]

After the Reesor Siding 1963 Strike, Cochrane was the site of the trial for 20 Reesor Siding farmers charged with the killing of 3 union employees.

In the 2006 Census, Cochrane had a population of 5,487, a 3.6 percent decrease from the 2001 Census. Like many northern Ontario communities, the population is declining due to lack of employment. The main industries in Cochrane are the railway, tourism and lumber industries. Marginal farming also exists around Cochrane. Though the soil is considered to be of good quality, the growing season is too short to have substantial crop production.

Cochrane is situated along Ontario Highway 11, which is a major east-west trucking route part of the Trans-Canada Highway system. The town is close to the northern end of the road system in the area. The last roads in this part of Ontario end about halfway between Cochrane and Moosonee at Otter Rapids.

The town is served by the Cochrane Airport, but has no scheduled flights. 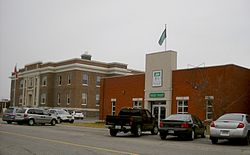 Cochrane is the birthplace of Tim Horton, a hockey player who founded the Tim Hortons doughnut and coffee shop chain in Hamilton, Ontario, in 1964. A new multi-purpose arena and events centre, the Tim Horton Events Centre, built in honour of him, was officially opened in the fall of 2006. Numerous construction delays hindered its official opening, but it is now fully operational. The Tim Horton Museum is also situated in the facility containing hockey memorabilia.

Cochrane is also the birth place of Tim Horton classmate Donald McKinnon (born 1929). McKinnon was first in forestry but later became a prospector. He is most famous as the co-discoverer of the goldfields at Hemlo on Lake Superior, resulting in three great gold mines. He lives and works out of Timmins under McKinnon Prospecting and was appointed a Member of the Order of Canada in 1996. A book, The Scholarly Prospector — Don MacKinnon, was published by Michael Barnes in 2007.

The Tragically Hip's song titled "Fifty Mission Cap" describes Barilko's mysterious disappearance. Barilko, who donned the blue and white Maple Leaf sweater for five seasons, scored the Stanley Cup clinching goal for the Leafs over their rivals the Montreal Canadiens in the 1951 cup finals. Four months and five days later, Barilko climbed into a small, single-engine airplane with friend and dentist, Henry Hudson. The plane disappeared between Rupert House and Timmins, Ontario, leaving no trace of Barilko or Hudson.

The song's lyrics also reference the WWII style U.S. Army officer's cap, mentioned in the song's title. The fifty mission cap was a cloth cap with visor issued to U.S. Army officers in World War II. Over time its folded and creased look would signify their participation in 50 aerial missions.