Pashto (Naskh: پښتو [paʂˈto]; also transliterated Pakhto, Pushto, Pukhto, Pashtu, Paxto or Pushtu), known as Afghani in Persian and Pathani in Punjabi (the two languages being located on either side of Pashto),[6] is the native language of the indigenous[7] Pashtun people or Afghan people who are found primarily between an area south of the Amu Darya in Afghanistan and west of the Indus River in Pakistan. It is a member of the Eastern Iranian languages group spoken in Pakistan and Afghanistan as well as by the Pashtun diaspora around the world.[8]

Pashto belongs to the Northeastern branch of the Indo-Iranian language family[5][9], although Ethnologue lists it as Southeastern.[10] The number of Pashtuns or Pashto-speakers is estimated 50-60 million people world wide.[2][3][3][4][1] The Constitution of Afghanistan declares Pashto as one of the two official languages of the country, the other being Dari (Persian).[8][11][12][13] 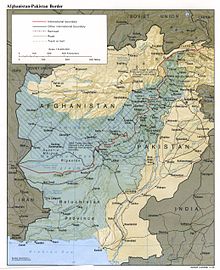 Pashto is a language spoken in South-Central Asia, primarily in Afghanistan and neighboring Pakistan as well as by the Pashtuns throughout the world.

As the national language of Afghanistan,[14] Pashto is primarily spoken in the east, south and southwest, but also in some northern and western parts of the country. The exact numbers of speakers are unavailable, but different estimates show that Pashto is the mother tongue of 35-60%[15][16][17][18] of the total population of Afghanistan.

In Pakistan, Pashto is the first language of about 15.42%[19] of Pakistan's 170 million people. It is the main language of Khyber Pakhtunkhwa, Federally Administered Tribal Areas (FATA) and northwestern Balochistan, but also spoken in parts of Mianwali and Attock districts of the Punjab province as well as by Pashtuns who are found living in different cities throughout the country. Modern Pashto-speaking communities are also found in the cities of Karachi and Hyderabad in Sindh.

Other communities of Pashto speakers are found in northeastern Iran, primarily in South Khorasan Province to the east of Qaen, near the Afghan border,[20] and in Tajikistan.[21] There are also communities of Pashtun communities descent in the southwestern part of Jammu and Kashmir.[22][23][24] 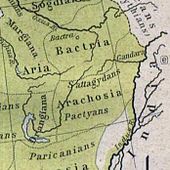 The Arachosia Satrapy and the Pactyan people during the Achaemenid Empire in 500 B.C.

The origin of Pashto language and the Pashtun tribes is unknown. The word "Pashto" derives by regular phonological processes from Parsawā- "Persian".[26] Nonetheless, the Pashtuns are sometimes compared with the Pakhta tribes mentioned in the Rigveda (1700–1100 BC), apparently the same as a people called Pactyans, described by the Greek historian Herodotus as living in the Achaemenid's Arachosia Satrapy as early as the 1st millennium BC.[27] However, this comparison appears to be due mainly to the apparent, etymologically unjustified, similarity between their names.[28][29]

Herodotus also mentions the Pactyan "Apridai" tribe but it is unknown what language they spoke.[30] Strabo, who lived between 64 BC and 24 CE, explains that the tribes inhabiting the lands west of the Indus River were part of Ariana and to their east was India.[28] Since the 3rd century CE and onward, they are mostly referred to by the name "Afghan" ("Abgan")[31][32][33] and their language as "Afghani".[34]

Scholars such as Abdul Hai Habibi and others believe that the earliest Pashto work dates back to Amir Kror Suri in the eighth century, and they use the writings found in Pata Khazana. However, this is disputed by several European experts due to lack of strong evidence. Pata Khazana is a Pashto manuscript[35] claimed to be first compiled during the Hotaki dynasty (1709–1738) in Kandahar, Afghanistan. During the 17th century Pashto poetry was becoming very popular among the Pashtuns. Some of those who wrote Poetry in Pashto are Khushal Khan Khattak, Rahman Baba, Nazo Tokhi and Ahmad Shah Durrani, founder of the modern state of Afghanistan or the Afghan Empire.

Before the present day ethno-linguistic situation in South Asia, the Afghan Empire comprised regions on both sides of the Durand Line by which the British colonial power annexed about one third of Afghanistan. The border created a buffer zone and was drawn through the Pashtun areas of settlement leaving the larger part of them in what was to become Pakistan.

Pashto (since 1936) and Dari (Persian) are the two official languages of Afghanistan. Persian, however, was the only official language until the 1930s,[36] and it still serves as the lingua franca of the country.[37]

Since the early 18th century, all the kings of Afghanistan were ethnic Pashtuns except for Habibullah Kalakani, and most of them bilingual although Amānullāh Khān spoke Pashto as his second language.[38] Persian as the literary language of the royal court[39] was more widely used in government institutions while Pashto was spoken by the Pashtun tribes as their native tongue. Amanullah Khan began promoting Pashto during his reign as a marker of ethnic identity and a symbol of "official nationalism"[38] leading Afghanistan to independence after the defeat of the British colonial power in the Third Anglo-Afghan War. In the 1930s, a movement began to take hold to promote Pashto as a language of government, administration and art with the establishment of a Pashto Society Pashto Anjuman in 1931[40] and the inauguration of the Kabul University in 1932 as well as the formation of the Pashto Academy Pashto Tolana in 1937.[41] Although officially strengthening the use of Pashto, the Afghan elite regarded Persian as a "sophisticated language and a symbol of cultured upbringing".[38] King Zahir Shah thus followed suit after his father Nadir Khan had decreed in 1933, that both Persian and Pashto were to be studied and utilized by officials.[42] In 1936, Pashto was formally granted the status of an official language[43] with full rights to usage in all aspects of government and education by a royal decree under Zahir Shah despite the fact that the ethnically Pashtun royal family and bureaucrates mostly spoke Persian.[41] Thus Pashto became a national language, a symbol for Afghan nationalism.[37]

The status of official language was reaffirmed in 1964 by the constitutional assembly when Afghan Persian was officially renamed to Dari.[44][45] The lyrics of the national anthem of Afghanistan are in Pashto.

In Pakistan, Pashto is the regional language of Khyber Pakhtunkhwa province and the Federally Administered Tribal Areas.[46] In 1984, Pashto was permitted to be used as the medium of instruction in primary schools.[38]

In Pashto, most of the native elements of the lexicon are related to other Eastern Iranian languages; those words can be easily compared to those known from Avestan, Ossetic and Pamir languages. However, a remarkably large number of words are special to Pashto.[5] Post-7th century borrowings came primarily from the Arabic, Persian and Hindustani languages (in Pakistan),[49][50] with the modern educated speech borrowing words from English,[2] French,[2] and German.[2]

Pashto employs the Pashto alphabet, a modified form of the Persian alphabet which on its part is derived from the Arabic alphabet. The reason for this is because, it is not a Semitic language, and thus it is modified. It has extra letters for Pashto-specific sounds. Since the 17th century Pashto has been primarily written in the Naskh script, rather than the Nasta'liq script used for neighboring Persian and Urdu languages. The Pashto alphabet consists of 45 letters, and 4 diacritic marks. The following table gives the letters' isolated forms, along with IPA values for the letters' typical sounds:

Pashto is written from right to left.

Pashto has two main dialects: a softer dialect spoken in the south, and a harsher dialect in the north. The former is further divided into southwestern and southeastern dialects, and the latter into northwestern (also called central or Ghiljai dialect) and northeastern. It is dominated by the geographical spread of the shift in the pronunciation of these five consonants:

The morphological differences between the most extreme north-eastern and south-western dialects are comparatively few and unimportant, and the criteria of dialect differentiation in Pashto are primarily phonological.[51]